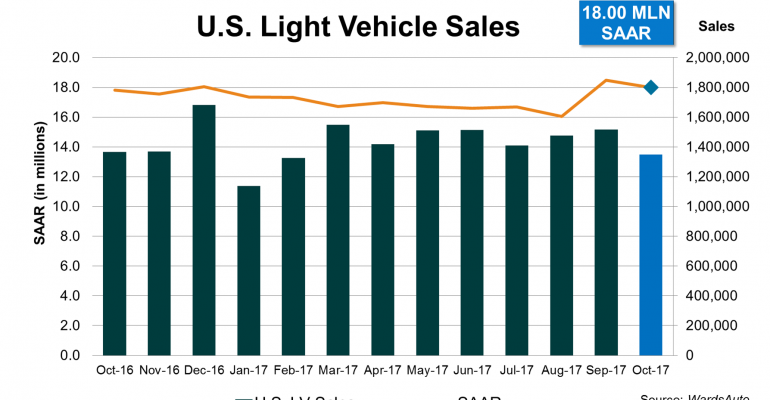 Going into October, the industry was burdened with excess inventory of &rsquo;17 models, with dealer stocks an estimated 10% to 15% higher than necessary.

October’s 18.0 million-unit seasonally adjusted annual rate was the second straight month sales topped the 18 million mark, and was well above the 16.8 million SAAR the industry was tracking at during the first eight months of this year.

Perhaps somewhat caused by replacement demand, fleet volume also helped, with an initial estimate for the month 2% above like-2016. Coming into October, year-to-date fleet volume was running 7% below same-period 2016.

Retail volume, which accounts for roughly 80% of the total market, declined an estimated 5% year-over-year in October after running flat with year-ago through September.

Replacement demand created from vehicle losses in August and September due to Hurricanes Harvey and Irma is expected to increase new-vehicle volume for this year by 100,000 units.

Going into October, the industry also was burdened with excess inventory of ’17 models, with dealers stocks an estimated 10% to 15% higher than necessary.

October’s sales burst, combined with production cuts, likely took out a big chunk of the excess inventory. However, there still will be an inventory overhang in November and December, and sales could remain above the 17 million-unit SAAR level for the final two months of 2017.

Based on DSRs, Ford posted its second straight year-over-year gain, on the strength of fleet volume and a whopping 20% increase in Ford F-Series pickup sales.

Ford’s surge allowed it to claim the No.2 slot in October ahead of Toyota, which had topped it during the third quarter as it underwent an inventory purge to alleviate its excess dealer stocks. Even though Ford zoomed past it in October, Toyota still managed a 5.2% gain, as well as a sixth straight year-over-year increase in market share.