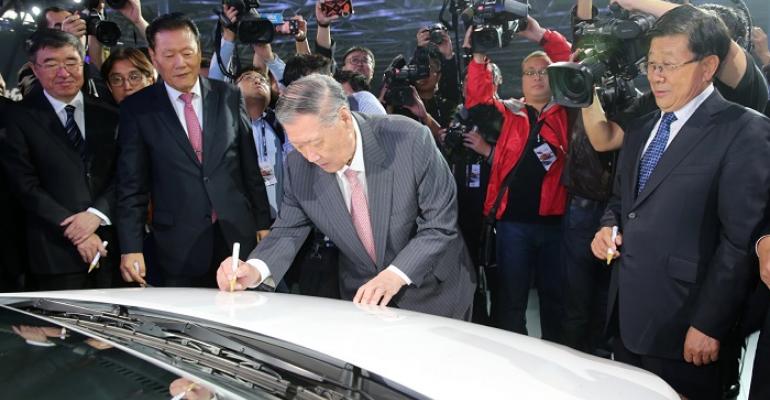 Capacity at the Hyundai brand&rsquo;s five plants in China will boost its output in the country to 1.65 million, approaching the current 1.87 million combined capacity of all Hyundai plants in Korea.

Hyundai officially launches production today at its fourth plant in China, adding some 6,000 jobs to the city of Cangzhou in Hebei province, and an additional 300,000 units of annual capacity when the plant hits full stride in 2017.

Hyundai’s four plants in China have annual capacity of 1.35 million vehicles, and a fifth under construction in Chongqing will boost planned output to 1.65 million, approaching the current 1.87 million combined capacity of all Hyundai plants in Korea.

The fourth new plant of Beijing Hyundai Motor, Hyundai’s JV with Beijing Automotive Industry Group, launches production on what is the 14th anniversary of when the partnership began selling vehicles in China.

When the fifth Beijing Hyundai plant goes into operation in Chongqing in 2017 and reaches its targeted capacity of 300,000, it will bring Hyundai’s annual output to 2.7 million vehicles.

Hyundai’s plants can produce more vehicles than their planned capacity by optimizing processes, which they have been doing regularly in China as the market expands.

Known as the Accent in other countries, the Verna Yueda launching at the Cangzhou plant had its concept debut at the 2016 Beijing auto show in April.

The Cangzhou plant occupies 2.6 million sq.-ft. (250,000 sq.-m) of floor space and is Hyundai’s most automated plant in the world. The body line is fully automated, equipped with 299 robots. Press, body, paint and assembly are integrated and fully flexible to permit simultaneous production of a variety of vehicles.

In addition to the Verna Yueda, Hyundai spokesmen say the new plant also will produce lower-cost China specific SUVs to compete against China’s homegrown products taking the lion’s share of that lucrative segment.

Now accounting for 34% of the China market, the SUV segment is expected by some analysts to reach 40% in the next five to six years.

At present, Hyundai has few offerings in China’s green segments.

The deal, which gives workers an average monthly wage boost of 72,000 won ($63), was ratified Friday by 63% of the 46,000 union members who voted at all eight Hyundai assembly plants located in Asan, Jeonju and Ulsan.

Workers get the same bonus package and gratuities in an offer rejected in late August: A signing bonus of 3.5 months’ pay, incentive bonuses of 3.3 million won ($2,900), 10 shares each of Hyundai common stock and gift certificates with a face value of 500,000 won ($440).

The new agreement puts to rest 12 weeks of partial strikes, overtime refusal and one full-day strike. The strike action cost Hyundai 142,000 units of production valued at some 3.1 trillion won ($2.7 billion).

Often overlooked in news reports in Korea, or in company or union statements, is the union’s overtime refusal. Hyundai workers had refused to work any overtime hours, including weekend shifts, throughout the 12-week period of partial strikes.

Overtime and weekend work resumed Oct. 16, with workers showing up on makeup overtime shifts as scheduled.

However, the settlement may have come too late to brighten Hyundai’s clouded 2016 sales and earnings outlook.

At the beginning of the year Hyundai and Kia issued a joint statement saying they expected combined 2016 sales to increase 1.5% over the zero-growth sales level of 2015, when 8 million vehicles were sold globally.

However, several analysts now believe it will not be possible for Hyundai and Kia to reach that 2016 sales target of 8.13 million vehicles, and they may not reach the 8 million mark achieved in 2015.

Through the first nine months of 2016 both companies had combined global sales of 5,621,910 vehicles, down roughly 2% on year.

If there is a drop in global sales for 2016 on a yearly comparative basis, it will be the first combined annual decline for the two companies since Hyundai acquired Kia in 1998.