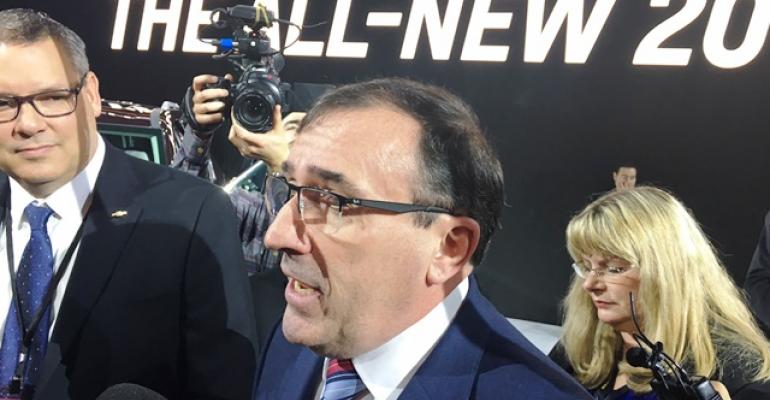 Last year, GM&rsquo;s product push focused on its car lineup. This year, the automaker turns its attention to red-hot CUVs.

DETROIT – General Motors North American President Alan Batey expects another banner year for the industry in 2017 and says his company enters the New Year looking to gain new customers at the expense of rivals but in a disciplined manner.

“It’s going to be another good year,” Batey tells WardsAuto after introducing the redesigned ’18 Chevy Traverse large CUV at the North American International Auto Show. “We remain optimistic and think we’re really well positioned. We head into 2017 hungry and humble.”

The U.S. industry set another annual sales record last year, with light-vehicle deliveries rising 0.4% to 17.46 million units from 17.39 million in 2015, according to WardsAuto data. However, analysts believe 2016 represented the high-water mark for the industry after a string of annual sales gains dating back to the end of the Great Recession. The outlook calls for still-strong but moderating demand this year.

GM saw its sales tick down slightly on volume of 3.04 million units compared with 3.08 million in like-2015. But the automaker slashed nearly 74,000 sales to rental fleets as part of a plan meant to boost profitability and shore up residual values. Retail sales grew 2%, GM says, although Batey admits the automaker took advantage of traditional year-end discounts to close 2016 with a bang.

“America was on sale in November and December, and we capitalized on it,” he says.

December also saw GM deviate from its retail focus with sales to rental companies up sharply, although Batey calls that move a “timing factor” related to orders from those firms.

“We finished bang-on where we said we would, and the good thing is all those (rental) sales were new-model-year-vehicles,” he says.

Batey says GM, which will cut production at five U.S. assembly plants this month to draw down vehicle stocks, will not turn up the spiff spigot in the first quarter to help balance supply and demand.

“We will remain disciplined,” he pledges.

Last year, GM’s product push focused on its car lineup with launches of key models such as the Chevrolet Malibu midsize sedan and Chevy Cruze 4-door compact. This year, the automaker turns its attention to red-hot CUVs with launches of the redesigned Chevy Traverse people mover, the slightly smaller Equinox and GMC Terrain and others still fresh to the market, such as the Cadillac XT5 and GMC Acadia.

Another key CUV in GM’s mix this year is the Chevy Bolt battery-electric vehicle. Deliveries of the hotly anticipated, although low-volume, EV began in December in California and Oregon, where the car will be sold exclusively until demand in those states is satisfied. But Batey thinks other markets could open for the Bolt soon.

“I would expect by the end of the year there will be availability nationwide,” he says.

Batey also reports U.S. sales of the Australian-built Chevy SS will stop by the end of the year. The V-8-powered sports sedan has been a niche model since its launch, evidenced by 3,013 sales last year. But it also served as GM’s entry in the NASCAR racing series. GM has given no word about an SS replacement in the race circuit.

“It’ll be gone by the end of the year,” Batey says of a sales halt that coincides with the end of vehicle production at GM’s Holden operations in Australia. Holden will shift exclusively to a sales and marketing unit this year.