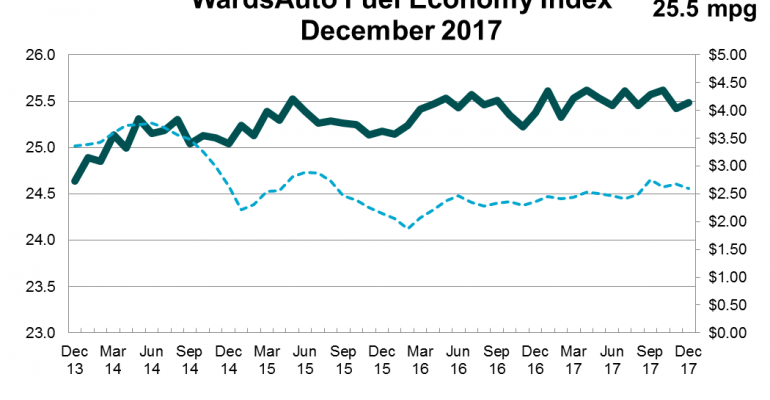 Preliminary results from the WardsAuto Fuel Economy Index show the average window-sticker MPG rating of light vehicles sold in the U.S. in 2017 was 25.5 mpg (9.2 L/100 km). A 0.5% improvement from 2016 falls in line with the small upticks recorded in the prior two years.

Low gas prices continue to be a primary factor in some consumers not opting for high-efficiency vehicles. The national average price of gasoline was $2.25 for the year, up 12% from 2016, but extends the sub-$3 rate to three consecutive years.

Light trucks hit a record-high 64.5% of indexed sales. The average rating was 22.6 mpg (10.4 L/100 km), a 2.4% improvement on prior-year. The primary body style was CUVs, accounting for 35.0% of LV registrations. CUVs also were the most improved light-truck segment on the index, up 3.4% to 25.2 mpg (9.3 L/100 km). Higher penetration of smaller engines and electrified powertrains is expected to continue large jumps in fuel economy.

Some automakers were able to achieve significant gains despite the overall subpar outcome. For example, Kia’s sales averaged 6.3% higher than prior-year, as the Niro hybrid accounted for 4.6% of the automaker’s sales in its first full year of availability. Share of all its electrified vehicles jumped from 1.2% in 2016 to 6.0% in 2017.

Mazda saw the sharpest downturn, slipping 4.7%. Share of its CUVs jumped, pulling away from small and midsize cars, which have higher fuel-economy ratings. Unlike most other automakers, Mazda lacks electrified powertrains that could counterbalance that effect.

The index results show a dampening of consumer interest in high-efficiency vehicles, but this does not necessarily mean automakers need to work harder to meet NHTSA and EPA fuel-economy regulations. CAFE mandates vary by automaker and are based on the size mix of vehicles sold each model year, so targets decline if there is a sway toward larger, generally less efficient body styles.