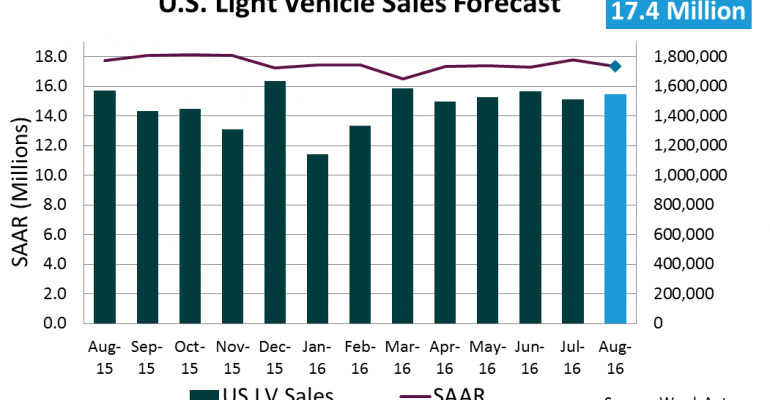 The industry will be pulled down by the Detroit Three, which are expected to undersell year-ago by a combined 5.0%.

A WardsAuto forecast calls for August U.S. light-vehicle sales to reach a 17.4 million-unit seasonally adjusted annual rate, less than like-2015’s 17.7 million and July’s 17.8 million, but ahead of the 17.2 million recorded over the first seven months of this year.

The report is calling for 1.55 million light vehicles to be delivered over 26 selling days. The resulting daily rate of 59,454 units represents 1.5% decline over same-month year-ago (also 26 days), but a 2.1% month-to-month improvement from July (26 days).

The total includes just over 599,000 cars, down 10.7% like-2015. Light-truck sales remain strong, growing 5.3% from year-ago on volume of nearly 947,000 units. August tends to be a good month on a seasonal basis for small and midsize cars, small/middle CUVs and fullsize pickups. Each group has ample inventory, with the small- and midsize-car sectors slightly high for two segments slipping in demand.

LV inventory ended July at 3.53 million units, resulting in a higher-than-average 61 days’ supply. Stock at the end of August is expected to grow to 3.59 million units, but the increased daily sales rate will bring the days’ supply to 55.

The industry’s August sales performance will be pulled down by the Detroit Three, which will undersell year-ago by a combined 5.0%.

Ford is expected to deliver near 208,000 LVs in the month, resulting in a 9.4% drop in daily sales. Its estimated 13.5% market share is significantly less than the 14.6% take recorded year-ago. Ford’s fleet sales were strong in the first half of the year, causing a pull-ahead effect that has reduced sales potential in the second-half. The August number would bring Ford’s year-to-date total 2.0% below like-2015 to 1,735,000.

Honda should see the greatest year-over-year gain in daily sales for the month, with forecast volume of 159,220 vehicles equating to 2.2% growth from year-ago’s DSR.

Hyundai Group’s year-over-year improvement is just slightly behind Honda’s at 2.1% on 134,000 deliveries.

Nissan is having the best year so far, with year-to-date sales forecast up 6.4% including August sales of more than 134,000 units.

Although August volume is expected to come in below year-ago, the industry remains on track for another record year. At forecast levels, year-to-date LV sales through August would total 11.65 million units, up 0.7% over same-period 2015.