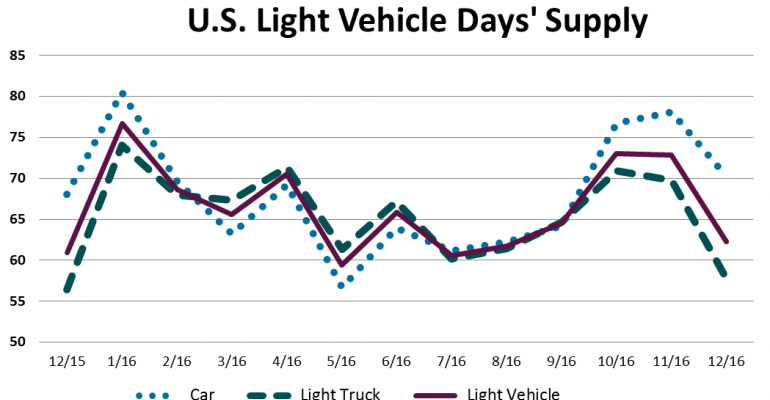 Despite announcements of temporary plant shutdowns and shift reductions, North American production still is expected to rise in Q1-2017.

Record December U.S. sales failed to put much of a dent in the bloated inventory on dealer lots, setting up the potential for a continuation of heavy price discounting in January, on top of planned production slowdowns.

U.S. dealer light-vehicle inventory ended December at 3.874 million units, which was a 3.1% decline from the prior month’s all-time November high of 4.0 million. However, with December one of the strongest months of the year in sales volume, but a weak month for production due to holiday-related plant shutdowns, it’s normal for inventory to decline from November.

More telling is that December stocks were 9.2% above same-month 2015, the biggest year-over-year gap since the summer of 2014. At that time, the industry was still in a cyclical growth mode, and the industry was able to quickly erase the excess with additional retail spiffs.

Current conditions are different. Unless manufacturers continue to push growth through more artificial means, the market likely is headed for a cyclical downturn this year. Dealer stocks began running a little higher than necessary in second-quarter 2016, but the excess became more acute toward the end of the year, even with sales pumped in Q4 by a ratcheting-up of incentives.

An initial look at typical month-to-month movements in sales and inventory-related indicators points to January LV sales notching a robust 17.8 million-unit seasonally adjusted annual rate. If January’s results finished that high, it likely would be rooted in a continuation of Q4-2016’s heavy price discounting.

Manufacturers are using production cuts to keep some vehicles in line with demand. Most of the cuts are in cars, though some truck plants are undergoing inventory-control measures too. But the truck cuts mostly are related to adjusting for the end of seven years of growth in the overall market, whereas car reductions are tied more to their long-time slide in demand.

Inventory of just domestically made cars was in slightly worse shape, up 2.6% year-over-year, with sales down 4.0% in December and 9.4% the entire year. Thus, car output is forecast for a year-over-year decline in Q1.

Despite lower car output, and that some truck plants also are slated for inventory control measures, North American manufacturers are forecast to build more vehicles in Q1 than in the same period last year.

Part of the increase is due to new capacity for vehicles formerly sourced from overseas. Filtering out the new capacity, the Q1 production outlook still is on a par with year-ago mostly due demand for CUVs, which are eating up market share. Several manufactures are offsetting cuts in car output with increases in CUVs, and capacity has even been increased for some particularly hot sellers.

Although inventory is a robust 20.0% above year-ago, CUV stocks are well-balanced with demand. Dec. 31 days’ supply for CUVs is 52, nearly flat with like-2015’s 51, and typical for the segment group in December. Even though sales of imports have risen faster than domestically produced versions, domestic days’ supply also is 52, compared with 53 in December 2015.

Overall, truck inventory ended December at 2.312 million units, 15.2% above year-ago. Days’ supply of 58 was spot-on with a normal level for the month. Dec. 31 inventory of domestically produced trucks was up 12.4% to 1.90 million, good for a healthy 60 days’ supply.

Besides some CUVs, truck dealers still could use some more volume in the Small Pickup segment. Conversely, Small Van, which has recorded five straight year-over-year monthly sales declines, is running somewhat bloated with higher-than-normal days’ supply totals at FCA US, Ford, General Motors and Toyota.

In cars, although inventory is still too high, December took care of a good chunk of the excess in luxury makes. Small Car is relatively in good balance with demand. Middle Car, mainly the bread-and-butter sedans in the Lower Middle segment, likely will suffer the most in reductions to production and import shipments.

Lower Middle inventory ended December up 1.3% from the same year-ago period. Models with hefty year-over-year inventory increases include Chevrolet Malibu, Honda Accord, Subaru Legacy, Toyota Camry and Volkswagen Passat. Additionally, stocks for the Ford Fusion and Nissan Altima could use some more paring, although both are down from a year ago.