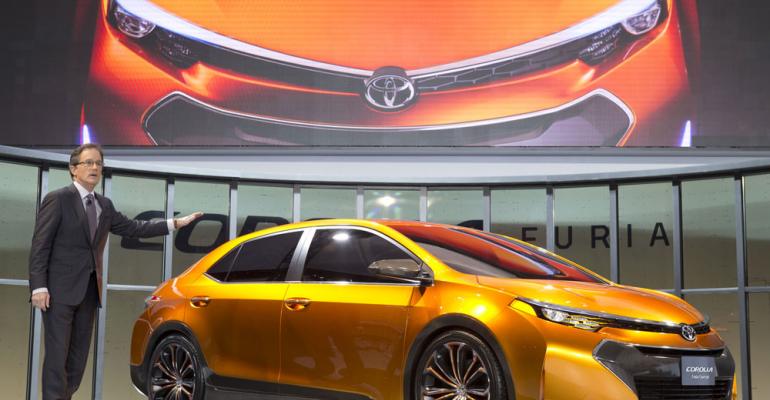 Toyota&rsquo;s brisk-selling compact one day may look like the concept car unveiled at the Detroit auto show, but it will be a while.

Due out later this year, the production version of the refreshed compact will borrow some design cues from the unveiled concept car, says Bill Fay, group vice president and general manager- Toyota Div.

The Furia is far from a finished product, however. Fay invites journalists on stage for a closer look, “But please don’t open the doors,” he says. That’s because behind the blackened windows is only a shell of an interior.

The burnished exterior is eye-catching, though, with angular features intended to grab the attention of younger buyers who, post-recession, “are returning to the market at a faster rate than any other generation,” Fay says.

The concept car essentially is a styling exercise for Toyota designers assigned to create more dramatic-looking cars than the staid models of the past.

“The Furia concept is an early indicator of where our compact-car design may lead in the future,” Fay says.

Carbon-fiber accents adorn the wheel wells, rocker panels and rear valance. But it may be a while before an entry-level Corolla wears carbon fiber, an expensive material currently limited to luxury cars.

Fay acknowledges an auto maker cannot get too extravagant in developing a compact car with a relatively low price point.

“We must maintain affordability,” he says on the sidelines after the debut of the Furia. “But consumers, especially young ones, want styling as well.”

On the other hand, the Corolla’s wide buyer base demands broad design appeal, Fay says. “It’s a balancing act.”

“The Corolla brings a lot of first-time and pre-owned buyers to the brand,” Fay says.

Toyota has built the Corolla in the U.S. since 1984. By the end of the year, all Corollas sold in the U.S. will be built at North American plants in Mississippi and Ontario, Canada, he says.

Toyota Back From Brink With New Models, Brighter Outlook
Nov 28, 2012