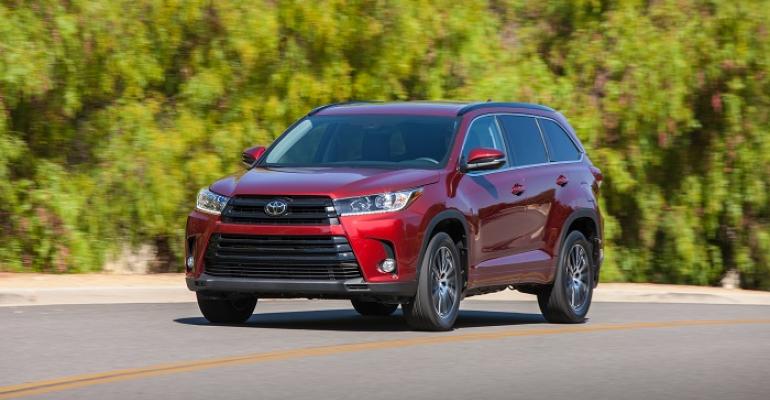 <p><strong>Highlander CUV one of many Toyotas being redesigned over next four years.</strong></p>
Industry News

A higher-than-average number of new models are due in the next four years, but with slowing new-vehicle sales and record numbers of leased vehicles due to return, danger lies ahead.&nbsp;

That’s one of the conclusions of the 27th annual Car Wars study by Bank of America Merrill Lynch, presented here at an Automotive Press Assn. luncheon.

“They really are doing a great job of refreshing their product portfolio,” John Murphy, automotive analyst for Bank of America Merrill Lynch tells the gathered media of the No.1 Japanese automaker.

The “slew” of new product launches by Toyota in the next four years includes most of its best-selling models, including the next-generation Camry midsize sedan due this summer, plus redesigns of the Corolla, Highlander, 4Runner, Prius and Tundra. Murphy sees Toyota’s mix as well weighted between cars and light trucks and says given the high replacement rate it could pick up market share.

GM and Ford, meanwhile, are prepping new versions of some of their most venerable models, such as GM’s fullsize pickups and Ford’s Escape, while also bringing new models into the hot light-truck sector including the revived Ford Bronco.

“(GM is) doing fairly well and they should be in a position, presuming the market holds together, to actually gain a little bit of market share and maintain price,” Murphy says.

While Ford is weak on new product in ’18, with just the Ford Expedition and Lincoln Navigator large SUVs due, the product pipeline strengthens in ’19 with next generations of the Focus compact car and Explorer midsize SUV, and in ’20 with the next-gen F-150 fullsize pickup, Fusion midsize sedan and Escape midsize CUV, as well as the launch of the Bronco, which will face off against the Jeep Wrangler.

While he notes the FCA product portfolio’s “extreme overexposure” on utilities and pickups, Murphy believes the Italian-American company’s bet that consumers will continue to prefer light trucks to cars (FCA exited the compact and midsize sedan segments this year) is a good one. Next generations of the Jeep Grand Cherokee and Ram pickup are notable FCA debuts, both set for ’19, says Murphy.

After launching a slew of products this year and last, Honda slows down for the ’18-’21 period, although its replacement rate of 82% is just under the industry average. New versions of the Odyssey minivan and Accord midsize car launch in ’18, while ’19 and ’20 are weak (although the automaker has said it is planning a dedicated hybrid in that timeframe).

Bank of America Merrill Lynch combines Korean and European automakers into groups, with the former having an 81% replacement rate and the latter 79%. He notes Volkswagen in particular should be strong, with an 82% replacement rate, and also forecasts new CUVs from BMW in ’19 and ’20. He says ’21 will be a “huge year” for Mercedes with a new S-Class due.

Nissan has the lowest replacement rate of the automakers presented at 77%.

“Nissan still seems like it’s a boat adrift,” Murphy says, noting it continues to be hard to forecast the automaker’s product cadence. However, Car Wars shows a new Juke small CUV and Infiniti Q70 sedan due in ’19, Rogue and Pathfinder CUVs and Sentra compact car in ’20 and Murano and Infiniti QX70 CUVs in ’21.

WardsAuto data shows many Nissan models aren’t due until ’22, including the new-to-the-U.S. Kicks subcompact CUV as well as redesigns of the Maxima large sedan, NV commercial vans, Versa subcompact car and Leaf electric car. The latter, however, is seeing a major refresh in ’18.

In total, the Car Wars study calls for 57 model launches in the ’18-’21 timeframe, up from the historical average of 39.

While new product is usually an encouraging sign of a strong industry, Murphy cautions trouble may lie ahead.

“The problem is, if we’re in a market that is actually starting to decline, and there has been investment in new product that’s being launched. The market is going to get a lot more crowded. It creates some real pricing risk if the cycle is actually turning as we expect it to.”

Bank of America Merrill Lynch reiterates its forecast for a seasonally adjusted annual rate of 17.9 million this year, but notes the SAAR could dip down into the low 17-million range. That’s where many industry prognosticators, including WardsAuto, predict it will end up.

Murphy fears the industry is getting too comfortable with a SAAR in the low 17-million range, given the record amount of vehicle leasing taking place. Lease penetration in the U.S. is 10% higher than normal at 30%.

In 2017, a record 3.5 million vehicles are set to come off lease in the U.S. and by 2019 the firm’s analysis predicts as many as 5 million leased vehicles will be returned, which could harm residual values and depress used-vehicle prices – currently at all-time highs according to Manheim data. Rising interest rates also could spike monthly lease payments, making a new leased vehicle unreachable for many consumers.

“A market that is sized to absorb those numbers of vehicles coming off lease in an orderly fashion would be 17.5M or potentially higher,” Murphy says. “We’re staring down the barrel of a leasing tsunami.”

In 2002-2003, when 3.2 million leased vehicles were returned in the U.S., he notes GM cut its prices but not its output to keep up, depressing profitability and a factor that led to its bankruptcy filing in June 2009. Murphy says the same situation could happen again if automakers don’t stay disciplined on inventory and incentives.

He says automakers and their captive finance arms, which underwrite most automaker leases, could sell more off-lease vehicles to lessees if residual values could be written below what is on the lease agreement.

Toyota Hopes to Strengthen Relationships With New Supplier Center
May 24, 2017