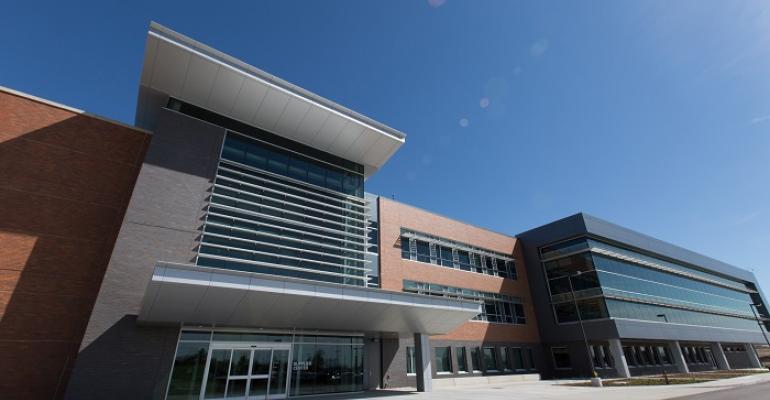 Toyota hopes its new Supplier Center will cultivate even stronger, more fruitful relationships between the automaker and its suppliers, as well as lead to quality improvements and cost savings on vehicle programs.

YORK TOWNSHIP, MI – While it once again is rated No.1 on the annual Planning Perspectives study of OEM and supplier relations, Toyota is not resting on its laurels.

The automaker in January opened new purchasing and prototype-development centers on its Toyota Technical Center campus here, part of a $154 million investment announced in 2014 by Toyota North American R&D for the Ann Arbor area.

Per the name on the building, the purchasing center is known to guests as the “Supplier Center” and it is Toyota’s hope it will cultivate even stronger, more fruitful relationships between the automaker and its suppliers.

“This really was developed with kind of supplier interaction in mind,” Jeff Makarewicz, group vice president-safety and vehicle performance for TTC, tells WardsAuto. “So this whole first floor is to enable suppliers to come in here and work here and spend time here, vs. waiting in a lobby and having to wait 30 minutes for their meeting.”

Says Ryan Grimm, general manager-purchasing for TTC: “When a supplier comes they check in, then they have free rein to go where they want on the first floor.”

Features of the new 3-story building include collaboration and individual areas.

“Purchasing and supplier engineering (departments) obviously work closely with our suppliers, so our concept was for the second and third floors (to be) individual-space areas – and we’ve built in collaboration space on those floors for our internal collaboration, (but) this whole first floor is designed for collaboration with suppliers,” Grimm says.

Suppliers waiting for a meeting, or having multiple meetings at TTC, may need a semi-private place to work, so the first floor has a cubicle farm.

“They can just camp out here (at these stations) and work,” Grimm says, pointing to nearby meeting rooms with doors if more privacy is desired.

In crisis situations, such as earthquakes or tsunamis that may halt vehicle or parts production anywhere in the world, Grimm envisions the cubicle area being “full of suppliers, getting information from their plants, (and) sharing information with us.”

A parts-evaluation room has tall, butcher-block tables with barstools to allow closer looks at drawings or parts. It’s a space for “getting your hands dirty with the parts, being able to disassemble parts and connect the CAD and make improvements on the spot,” Grimm says.

The room is an example of how Toyota wants to begin collaborating sooner with its suppliers from the advanced vehicle-development phase, rather than after the prototyping and concept stage. The automaker sees earlier collaboration improving new-vehicle launch readiness and the value of parts and processes, focusing on innovating via earlier and deeper teamwork.

“As a part is designed, how do you consider downstream what are the manufacturing implications?” Grimm says. “If you include those in the design concept in the beginning, there are huge opportunities for value improvement and quality improvement. And we also link in the supply chain as well. How do you design a part that has the most efficient supply chain as well? In other words, don’t bring the materials all the way from Japan or Europe, make them locally. So if you link all of these, that’s obviously the concept.”

Grimm says successes already have been realized. For example, a 1-piece bracket on a curtain-shield airbag was redesigned into two brackets to save money. Also, by working directly with designers, tape adhesion for the airbag was improved, which he cites as both a quality win and a manufacturing-efficiency win for the supplier.

“This is really the essence of what we’re doing: Working more closely and earlier with related groups to maximize efficiency…increase our speed-to-market, improve our quality, also hopefully reduce cost as well. Not just on the supplier side (but also) on the Toyota side,” he says, adding taking the total cost out of a vehicle system is a benefit that can be passed on to consumers.

Other spaces on the Supplier Center’s first floor include a 500-person hall that can hold meetings, such as Original Equipment Supplier Assn. town halls, or be subdivided into as many as 10 smaller rooms; an on-site pharmacy run by Wal-Mart; and training rooms for both internal and external training.

Teardowns and first-level benchmarking is outsourced to a third-party company in nearby Ypsilanti, which keeps both a library of physical parts as well as a website where parts can be viewed in very high-resolution images.

“We can’t just say, ‘Hey, we want to get all the driver doors and bring them in here and line them all up. Logistically it’s very difficult,” says Frank DiMaggio, analyst-TTC. “So (the website) is kind of our vetting of the parts process,” he says while pinching and pulling, zooming in and out, a detail of an unadorned truck door on a giant touchscreen.

Robertson says the goal of the TCBC is to break down vehicle performance to a system level, then a parts level, to understand, “What’s important, why (a part is) good and how do (competitors) achieve that?

Toyota rotates parts on the TCBC’s shelves quarterly and right now is evaluating truck parts as it develops its next generation of Tundra and Tacoma pickups.

Of Toyota’s first-place finish on the Planning Perspectives’ Supplier Index, Grimm says the automaker is happy to be on top once again, but notes the hiring of new purchasing employees caused a leveling-off in Toyota’s score for 2017, which was 328 vs. 332 in 2016.

“We did have a slight dip,” he says. “The survey was done in 2016, when we were in the process of bringing on many new team members, starting this new facility and the types of processes we’re trying to implement…We think we can continue to improve.”

Grimm says 250 purchasing employees from the automaker’s former Erlanger, KY, R&D center were offered jobs in York Township and 200 made the move. Locally 50 employees have been hired to fill open positions, with Grimm lauding the talent pool, including recent graduates from nearby universities such as The University of Michigan and Michigan State, as very good.