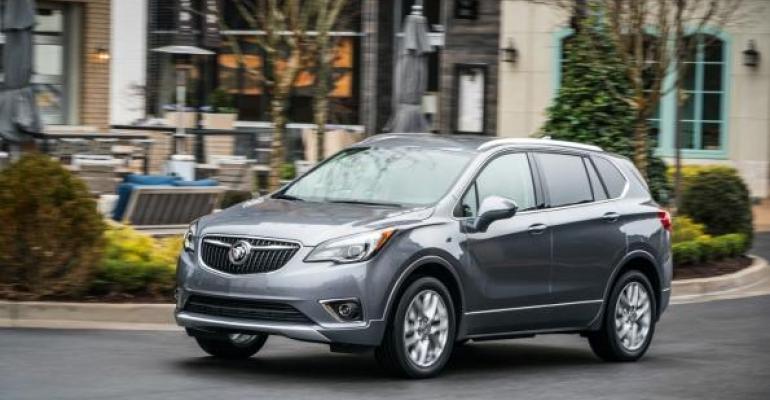 <p><strong>Made in China, the Envision ranks as Buick&rsquo;s No. 3 volume seller. The top two also are CUVs. </strong></p>
Industry News

Buick Hopes Encore Owners Will Buy Up to Envision

Buick is doing a 1-2 step with its Envision and Encore CUVs.

The tango goes like this: First get buyers into the compact Encore (starting at $23,915) and on the next go-around of their buying cycle put them in the larger (and pricier at $32,990) Envision.

Of course, such a transition depends entirely on customer buying decisions. But Buick’s strategy is to move them up the lineup.

The thinking goes like this: Nearly 60% of Encore buyers are switching from a non-General Motors brand. Buick says these newcomers increasingly become return buyers, with nearly half of them likely to trade in their vehicle to buy another CUV. Enter the Envision from stage right.

“It’s for people moving on up,” says Rick Spina, executive chief engineer for the ’19 Envision, which comes with new front, rear and grille designs, added features and a lower price than its ’18 predecessor.

In addition to attracting new customers to the Buick brand all by itself, the midsize Envision is designed with the evolving needs of current Encore owners in mind, Buick says. (For the big-vehicle crowd with heftier budgets, there’s the Enclave, Buick’s third and largest CUV starting at $40,970.)

At a press preview of the new Envision, Spina is asked if a drawback to the Encore-to-Envision customer journey is that Buick loses an Encore customer in the process.

“You keep them in the family” and at an increased transaction price, he replies. “The trick also is to feed the bottom so that people are consistently coming in.”

Adds Sam Russell, Buick’s marketing director: “You need to allow people to migrate with their changing life stages.” Changes include having kids (or more of them) and consequently needing a roomier vehicle.

Made in China, the Envision first went on sale in the U.S. nearly two years ago.

“It filled a huge gap between the Encore and Enclave,” Russell says. Before Envision made the scene, there was “a big step from an Encore to an Enclave,” he adds.

Seventy percent of Envision sales growth has occurred in the second half of its run. Buick sold 41,040 Envisions in the U.S. in 2017, according to Wards Intelligence. That compares with 14,193 in 2016 after it went on sale in the summer of that year. It delivered double-digit-percentage sales gains last month.

The Envision is Buick’s No.3 volume contributor. The Encore is No.1 with sales of 88,035 last year.

“The Encore is huge for bringing new customers to the brand,” Russell says. The Enclave holds the No.2 spot with sales of 48,564 units.

In contrast to those relatively high numbers, the top-selling Buick car, the LaCrosse, had sales of 20,161 last year, and that was 26.9% fewer than the year before. If ever a brand shows CUVs are hot and cars are not in today’s market, it’s Buick.

As part of making the Envision more alluring to step-up CUV buyers, Buick has knocked about $2,000 off its sticker. The outgoing model started at $34,990. But the new one comes with more options that are expected to help goose transaction prices.

“The new pricing strategy not only puts the Envision in the heart of the industry’s largest segment, but also better positions it in relation to the Encore,” Russell says.

New features on the ’19 Envision include the option to deactivate the stop/start system. “Some customers are uncomfortable with having the engine stop,” says Spina.

He’s quick to note that drivers who opt to activate the stop/start system will find it works smoothly. Gone are the jolting effects of early stop/start setups.

Product developers spent much time garnering input from current Envision owners. “Some of the Envision’s most notable changes are the results of listening to our customers,” says Elizabeth Pilibosian, the vehicle’s chief engineer.

Asked if more was done to “Americanize” the ’19 made-in-China Envision, Spina says, “Almost nothing, because it was essentially designed for the American market.”

I Drove a Chinese Car; American Auto Workers Have Reason to Worry
Feb 15, 2017