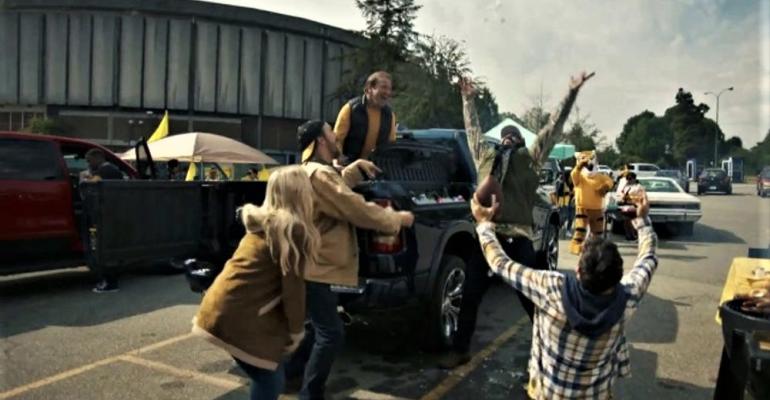 Carmakers chose between spending big on NFL placements or spending less on other programming, according to iSpot.tv.

Ram Trucks’ “Moments” takes the No.1 position on iSpot.tv’s latest list of carmaker TV commercials with the most impressions, yet does so with the distinction of having the lowest estimated national ad spend of the top five.

The estimated $1 million national budget for the ad represents just under 7.5% of the combined $13.5 million spent on the five ads on this week’s list. The highest spender, Chevrolet, dropped an estimated $5.6 million on placing its “EVs for Everyone” commercial, landing third on the list.

The difference between them? Airings. Ram bought over 1,400 nationwide airings with its $1 million, focused on the President’s Cup and college football. Chevy, meanwhile, spent the bulk of its budget on NFL games (over $3.7 million) and bought just over 400 national airings.

That proved to be a trend on the list this week, as every other carmaker with significant NFL placements all featured fewer than 1,000 airings for the week. This includes GMC’s “Outside In” and Acura’s “Drop The Mic.” Only Nissan’s “60 Years in 30 Seconds” followed Ram’s lead and eschewed the NFL, leading to over 1,000 airings.

According to iSpot’s Ace Metrix survey, viewers found GMC’s “Outside In” the most persuasive ad in our top five, with an overall Persuasion score 6.3% above industry norms. It also received the best Brand Match rating – 91%, referring to the percentage of surveyed viewers who remembered it was a GMC ad after watching it.

GMC: Outside and In

Chevrolet: EVs for Everyone