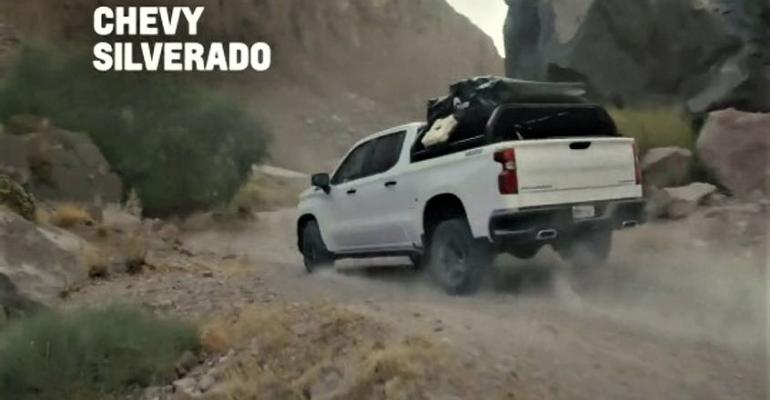 But Chevrolet claims the single most-seen auto ad for the second week in a row, according to iSpot.tv.

With over 297.5 million TV ad impressions per iSpot.tv, an ad for Chevrolet’s Silverado models takes first place as the most-seen automaker spot for the week of Jan. 9-15. That’s about a 50% week-over-week increase in impressions for the spot, while estimated national TV ad spend increased 226% compared to the previous week.

About half of those impressions came from NFL games, while college football delivered about 25.6 million TV ad impressions. According to iSpot’s Creative Assessment, 35% of survey respondents said the visual scenes were the best thing about the commercial.

Lexus dominates the rest of the chart. Overall, the brand aired eight ads (including four ads that didn’t make our top five) over 4,000 times during the week – about twice as many as Toyota, which was the automaker with the second-most ad airings. The eight Lexus ads racked up over 688 million TV ad impressions, with NFL games, college basketball and SportsCenter as the top impressions-driving programs overall.

The leading Lexus spot, “Electrified,” highlighting its electric vehicles, generated more than 200.6 million TV ad impressions, around a quarter of which came from NFL games. iSpot’s Creative Assessment survey data shows the ad had 91% brand recognition (the percentage of survey respondents who remembered it was a Lexus ad after watching it), above the automaker industry norm of 81%.

“Characters,” the No.3 ad, invites viewers to “discover a new world of possibilities” with the Lexus RX. iSpot’s Creative Assessment shows the commercial garnered 10% more attention than the norm for automakers.