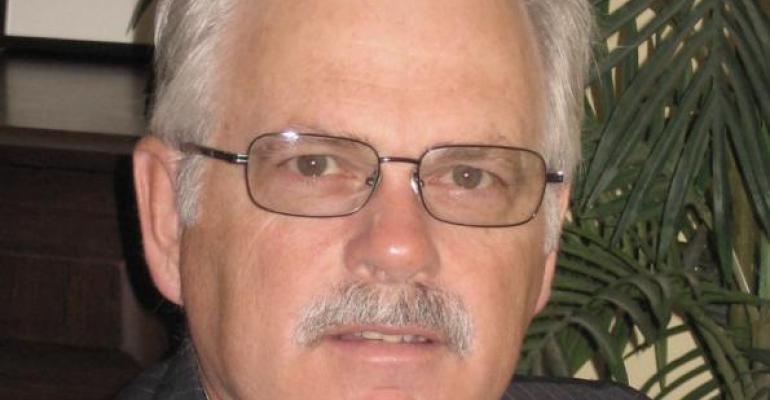 Do major program updates and all-new models provide the return targeted by automakers? Here&rsquo;s a look at how GM, Ford and Fiat Chrysler have fared.&nbsp;

Lights, camera, action! The North American International Auto Show is just around the corner, and the process of picking the best-in-class vehicles already is under way.

The Detroit Three will exhibit 17 vehicles that will have major improvements or be new introductions. Quite impressive.

While we at W.P Browne Consulting don’t get an official vote, my favorites for winning the 2017 awards are:

Same as every year, proclamations will be flowing about how wonderful the new vehicles are. Sales, marketing and public-relations executives will be giddy with excitement about this year’s new stuff. Some may even offer bold sales projections despite the market’s current moderation.

To us, it always is worth comparing show business carnival-barking with sales reality: Have improved models generated increased sales for the company? Did all the investment in tooling, metal, plastic, leather and marketing glitter generate more market share?

Auto-show speeches typically don’t provide such a level of reflection. That’s a market analyst’s job. So, 42 vehicle programs introduced by the Detroit Three over the 2013-2016 timeframe were evaluated to determine their effectiveness in generating new business. This period served as an excellent evaluation window, as the light-vehicle market had sustained sales increases every year; there were no peaks and valleys that could favor certain vehicles launched in upmarket years.

Return on investment, vehicle profitability or cash flow was not part of the evaluation. That requires insider information we do not have access to. It’s about measuring sales and share performance of the new stuff. Consequently, our study hypotheses are focused on examining the following assumptions:

To be included in the study a mainstream vehicle had to sell more than 60,000 units a year; a luxury vehicle had to sell more than 25,000 units per year. We were looking for vehicles that could make a difference in a division’s sales and share performance. Alfa’s 4C, Cadillac ELR and Chevrolet SS all are interesting niche vehicles. They just don’t move the sales needle.

From the period 2013 to 2016 we looked at 12 programs that received minors – a low-investment freshening of the product that could include technology upgrades to the powertrain and suspension, special editions, new colors and trim packages.

If a vehicle had a significant minor in 2013, we started there. If not, then we looked at the 2014-2016 window where there were other minor improvements over time. The average results provided a baseline for measuring the incremental effectiveness of all-new and major programs.

Program minors were evaluated on two metrics that were added together to determine a maximum potential percentage:

Thus, a vehicle could earn more than 100% of potential if it increased sales in the first year and had positive sales and share performance over the sustainability window.

Overall, the 12 vehicles with minor improvements averaged 54% of their maximum potential, with no real difference between car and truck program averages. Additionally, there was a very wide bandwidth in the individual vehicle results.

Strong performers: Ford’s Explorer (93% of maximum potential) and Jeep’s Patriot (81%) had the best overall performance. These two entries leveraged trim changes, new colors and minor powertrain changes into superior sales and share performance. The Explorer also is worth highlighting, because it always has been in relatively short supply, as has been the Grand Caravan, Wrangler and Chevrolet Equinox. These entries benefited from marketing creativity and produced sales results without spending serious upgrade money.

Five vehicles in Group 2 achieved an excellent rating. The sporty entries, Mustang and Challenger, topped the chart. These pony cars turned increased horsepower and trim upgrades into sales success. Chrysler’s 200 midsize sedan had excellent performance as well. Each model had eye-popping sales increases at launch. Likewise, Mustang and Challenger demonstrated excellent sales and share sustainability. Additionally, Ford Fusion and Ram Pickup achieved excellence. The all-new 2013 Fusion delivered interior and exterior enhancements in a larger package. Ford heaped on new powertrains and hybrids into the mix as well. Ram’s 3.0L diesel engine and pricing provided value that sustained sales performance. Not shabby, given that Fusion competes against the likes of Camry and Accord, while the Ram pickup always is butting heads with Silverado and F-150.

Silverado deserves a mention given it achieved a superior score. Superior performance also was achieved by Dodge Charger and Jeep Grand Cherokee. This is the level of sales and share performance you expect from major program improvements, although they could have performed better at launch. 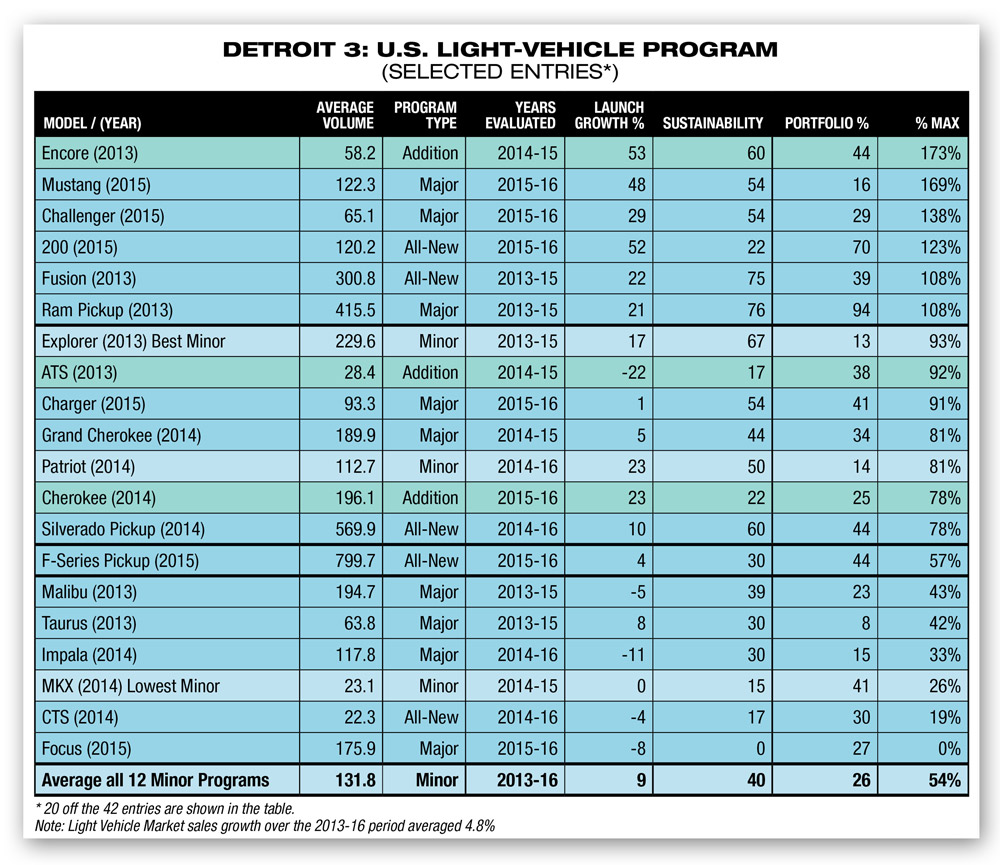 Ford’s Focus never got out of the starting blocks: no share or sales growth over the window. Chevrolet Malibu and Impala and Ford Taurus majors led in the poor-performance category. Sales in the launch year declined. To be fair, Impala was in short supply over the evaluation window, and the vehicle’s marketing strategy was changed. Let’s hope Chevrolet planned on the lower volume when they made their tooling decisions.

Cadillac’s CTS was a luxury-vehicle miss: So much money spent, so little volume.

Portfolio additions were evaluated a little differently. Sales and share sustainability were measured in the same way as the other groups. (First year = year after introduction). For new portfolio additions, we looked at how important the new entry was to the division’s sales mix. (Note: Chevrolet and Ford additions are at a disadvantage due to the large proportion of fullsize pickups in their portfolios).

The maximum potential for the portfolio additions received the highest average score: 117%. It is clear all entries made a difference. Jeep Cherokee certainly is worthy of a mention. The CUV established itself as a significant volume player in a division stuffed full of competitors.

This was not intended to be a definitive study; it’s a market-reality snapshot and reflects the competitive pressure of trying to gain more customers with new stuff. Competitors always are happy to hand out a “thanks for showing up” trophy to opponents who have launch failures. Nobody sleeps, not everybody wins.

Amazingly, only two of Detroit Three’s divisions have increased their light-vehicle market share over the evaluation window (vs. 2012): Ram and Jeep. Mission accomplished; all their product and portfolio improvements were rated superior or better in this study.

Yet, the bright lights and music at the auto show make it seem like every product is a winner. You never hear a sales and marketing executive proclaim, “We anticipate a few volume failures next year.” They save all the “marketing adjustment” spin when sales don’t rise to meet the forecast. Yet, this is reality, even in a boom market. So, we need to return to our original hypotheses and summarize what happened in the real world.

Major and all-new programs performed better than minor improvements on average, but individual results were very mixed. A paltry 40% of the group had higher sales growth at launch than the baseline group. Five entries had negative sales growth. Whoa! Bet the bean counters didn’t see that coming. Those entries get a “thanks for showing up” trophy. On the sustainability measure, only eight of the 22 scored better than the baseline. Competitive counter-measures to the new stuff did not show any mercy.

New-vehicle additions established themselves as significant entries in their division’s portfolio. Each company appears to have worked on real winners and spent less time working on “image” vehicles for their dealers. Well done.

Surprisingly, many vehicles with minor program improvements rocked in this study. Funny, the vehicle business is sometimes like a card game: you play what you are dealt to the best of your ability. Ford, Jeep, Dodge and Chevrolet played their “minor” cards very well.

The ultimate conclusion of this initial study: The additional work required to produce all-new vehicles or major improvements does not always yield great launches or sustainable results. Evaluating why will become increasingly important as we move into an era when vehicles will just drive themselves.

Toyota, Nissan and Honda will be evaluated in an upcoming column.

*If a vehicle had sales and share growth during their sustainability window, then: 1-year programs could earn 30 points; 2-year programs, 60 points; and, 3-year programs, 90 points. Complete data tables are available. Free copies can be requested at [email protected]

Warren Browne is an adjunct professor of economics and trade at Lawrence Technological University, and has his own consulting firm. He led the vehicle forecasting team at General Motors in the 1980s.

Improve or Get Left Behind: A New Mantra for Working-Class Van
Apr 08, 2016