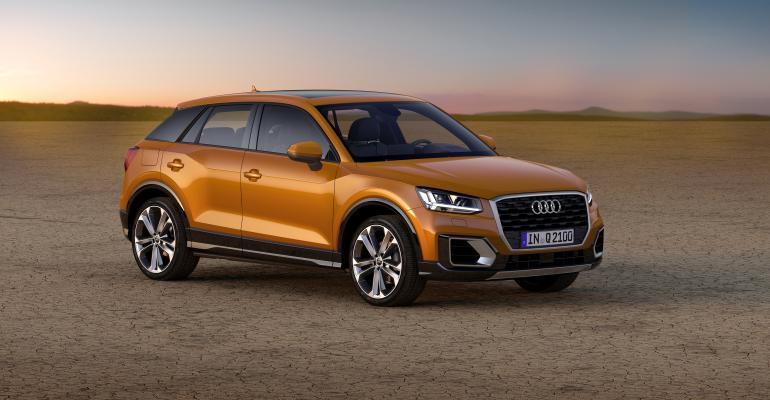 Previewed as the Crosslane Coupe concept car at the 2012 Paris auto show, the Q2 has endured a convoluted 4-year development process that Audi insiders reveal included a comprehensive 2014 redesign in response to criticism at customer clinics.

GENEVA – This compact CUV is set to be one of the biggest debuts at the 2016 Geneva auto show: the new Audi Q2.

Conceived to take on the enormously popular Mini Countryman and Mercedes-Benz GLA, the new 5-seater slots in the Audi lineup beneath the existing Q3, bringing the German automaker’s number of dedicated CUV models to four.

Initially previewed by the Crosslane Coupe concept at the 2012 Paris auto show, the Q2 has endured a convoluted 4-year development process that Audi insiders reveal included a comprehensive redesign of the new high-riding 5-door hatchback in 2014 following criticism of its original design during customer clinics.

The final production model, styled under current Audi design boss Marc Lichte, introduces a new exterior design lineage that is expected to be featured on a number of upcoming Audi SUV models, including the smaller Q1 planned for launch toward the end of the decade.

Inside, the cabin shares its look with that of the soon-to-be-facelifted third-generation A3, offering a high-definition digital instrumentation and head-up display among a wide range of options. Audi claims class-leading accommodation along with 14.3 cu.-ft. (405 L) of cargo space, extending to 37.1 cu.-ft. (1,050 L) when the split-fold rear seats are folded down.

The Q2 is the third Audi model to use parent company Volkswagen’s versatile MQB platform, the same architecture underpinning the 3-door A3 hatchback.

The new Audi model also receives a wheelbase that is a mere 0.2 ins. (5 mm) longer than its well-established Mini rival at 102.4 ins. (2,601 mm), providing it with suitably short front and rear overhangs.

A total of five transversely mounted engines offering six differing outputs ranging from 114 hp to 187 hp will be made available from the start of Q2 sales in Europe.

Buyers will get the choice of either a standard 6-speed manual or optional 7-speed dual-clutch S-Tronic gearbox; in the case of the most powerful 2.0L gasoline and diesel engines a newly developed unit features what Audi calls “a new type of oil supply and reduced frictional properties”.

Reflecting its role as more urban runabout than hardcore off-roader, all engines come with standard front-wheel drive and a torsion-beam rear suspension. The 1.4L and 2.0L gasoline and 2.0L diesel engines can be had with an optional Haldex multiplate-clutch all-wheel-drive system combined with a more contemporary multilink rear suspension. With an optional off-road package, the Q2 offers up to 7.9 ins. (201 mm) of ground clearance.

The Q2 originally was planned to be called the Q1, but in September 2015 Audi managed to secure the rights to the Q2 and Q4 names from Fiat Chrysler Automobiles, which previously used them on various Alfa Romeo models. Speaking at the time, Audi’s former R&D boss Ulrich Hackenberg said: “The production version of the Crosslane Coupe will be called Q2, and the Q1 will come later.”

This hints at an even smaller model based on a smaller MQB platform to be shared with the production version of the Volkswagen T-Cross Breeze concept, which also made its debut at this year’s Geneva show.

European deliveries of the Q2 begin in October. U.S. sales are yet to be confirmed.