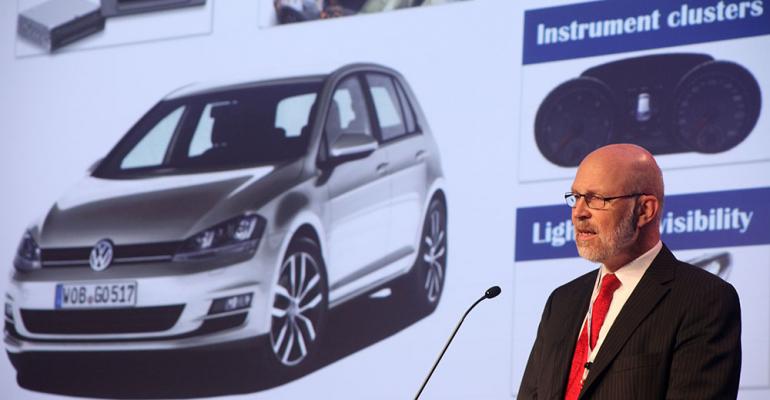 TRAVERSE CITY, MI – Despite reported difficulties in launching and expanding application of its new modular vehicle platform, Volkswagen officials say the German automaker still plans to use the architecture across a spectrum of vehicle segments, from subcompacts to midsize SUVs.

Volkswagen foresees building up to 60 different front-wheel-drive models with the so-called Modular Transverse Matrix. Its German acronym is MQB.

“Making adjustments to the wheelbase, track and length will allow us that variability,” Hubertus Lemke, head of technical project management in VW’s R&D division, says at the Center for Automotive Research’s Management Briefing Seminars here.

“It offers enormous flexibility,” he says. “By exchanging a few components, we can use the modular transverse toolkit to build cars in the A and B segments as well as the CUV segment.”

The architecture blends standardization with individuality, cuts engineering and manufacturing costs and allows the automaker to produce high-volume models, yet also satisfy a growing consumer interest in niche vehicles, he says.

In the U.S., MQB debuts this year for the Volkswagen brand with the new Golf and Golf GTI. The platform also underpins the new Audi A3 already on sale in the U.S.

In the future, it will be employed for other models with transverse-mounted engines, such as the Jetta, Passat and the upcoming CrossBlue CUV that VW’s plant in Chattanooga, TN, will produce.

VW theoretically could produce all of those vehicles on the same assembly line, Lemke says. “The MQB strategy represents a milestone in the design and production of future automobiles with transverse-mounted engines.”

The MQB architecture is touted as allowing VW to build vehicles to the requirements of diverse markets such as Europe, China, the U.S. and India.

“Everything is in one common platform, but every factory can change and react to customer demands quickly,” Lemke tells conference attendees.

VW runs 106 production facilities worldwide. The most, 28, are in the automaker’s home country.

A main characteristic of the MQB is the uniform mounting position of engines, including VW’s new modular diesel engines.

MQB also can accommodate alternative-fuel powertrains, including compressed natural gas, hybrids and battery-electrics. The e-Golf that goes on sale later this year in the U.S. uses the MQB architecture.

After an initial collision, it helps reduce the intensity of secondary collisions by automatically applying the brakes. It is standard equipment on the new Golf and Golf GTI.

However, reports surfaced last week that Volkswagen was having trouble increasing output of MQB-based vehicles in Germany because of production snags and has had to add shifts and increase overtime in order to meet demand.

Production chief Michael Macht, who was responsible for the MQB launch in Germany, left the automaker last week in a move Volkswagen says was “by mutual agreement.”