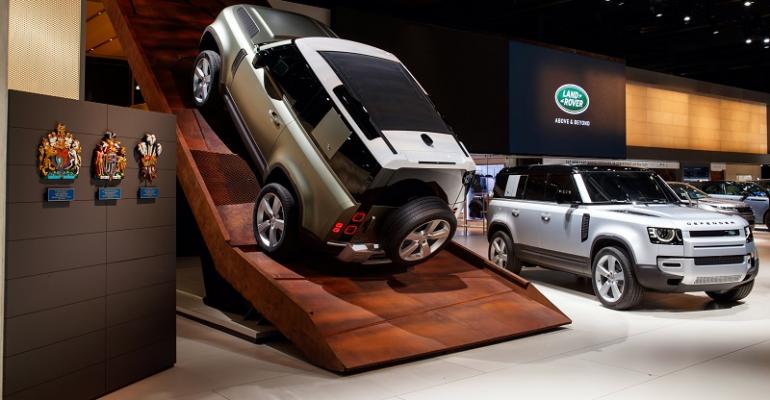 Land Rover’s legendary off-road model switches to a unibody platform for its long-awaited next generation, going on sale next year in the U.S. priced around $50,000 to start.

At its 2019 Frankfurt auto show stand Land Rover pulls the covers off the all-new Defender CUV, alongside the new Chevy Corvette one of the most anticipated vehicle debuts of the year.

The Defender will be available in 3- and 5-door body styles, in keeping with prior generations’ 90 and 110 naming conventions. The long-wheelbase 110, with seating for up to seven people, will go on sale next spring in the U.S., with the short-wheelbase 90, seating up to six, coming later in 2020, says Jaguar Land Rover North America, adding pricing will range from $49,900 to $80,900, excluding an $1,025 destination and handling charge. A center jump seat is available on both variants; an 8-seat Defender 130 reportedly will be a late arrival, although it is unclear if it is U.S.-bound. 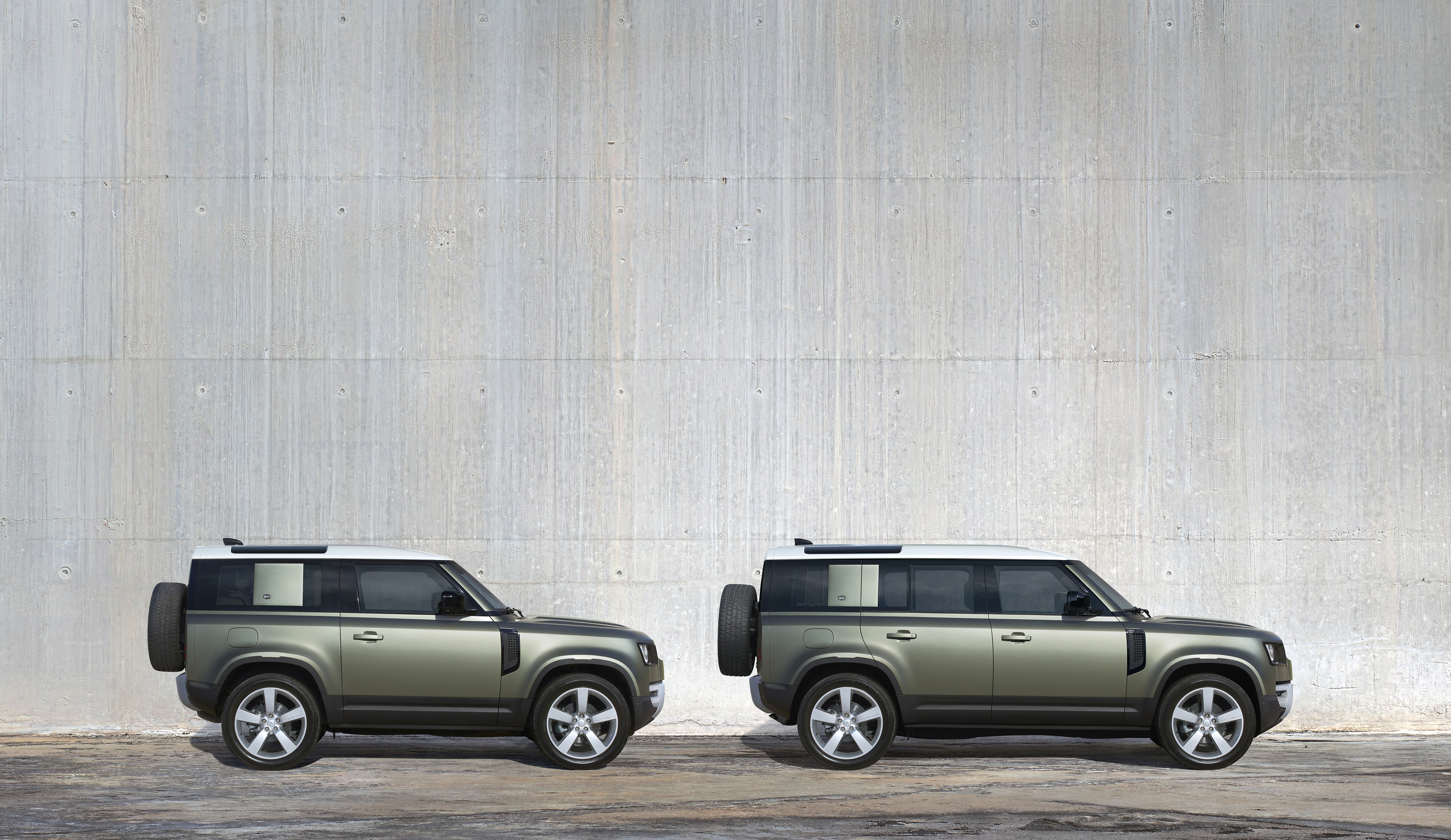 “The Land Rover Defender has always been a symbol of strength and the new model is the toughest and most capable Land Rover vehicle yet, combining a new body structure with all-new technologies and proven hardware to create a Defender that is fit for the 21st century,” JLR NA says in a statement released to media ahead of the Frankfurt show.

The Defender technically is a CUV, not a SUV, as its switches to a unibody platform from body-on-frame construction in the prior generation. Wards Intelligence classifies the ’21 Defender as a Luxury Middle CUV.

JLR says the vehicle has a purpose-engineered D7x architecture, based on a lightweight aluminum monocoque construction.

This gives the Defender what Land Rover says is its stiffest body structure ever made, “three times stiffer than traditional body-on-frame designs, providing ideal foundations for the fully independent suspension.”

Two gasoline engines will be available in U.S. Defenders, including a 296-hp turbocharged 4-cyl. and a 395-hp I-6 with a twin-scroll turbocharger and 48V electric supercharger.

Land Rover says with the mild-hybrid powertrain, a belt-integrated starter motor replaces an alternator for engine assist under acceleration, and the 48V’s lithium-ion battery captures energy as the vehicle slows.

A ZF 8-speed automatic transmission with a twin-speed transfer box, the latter providing the low-range ratios needed for towing and off-roading, is standard with both engines.

European Defender buyers also will get a choice of two 2.0L 4-cyl. turbodiesels, one making 197 hp and the other 237 hp. A plug-in hybrid variant also is expected for the region.

The Defender’s most obvious competitor in the U.S. is the Jeep Wrangler, and the ’19 Wrangler Rubicon, the priciest of all Wrangler grades (besides limited editions the Sahara Altitude and Moab), has a larger approach angle (44 degrees) than the Defender, roughly the same break-over angle (27.8 degrees in Rubicon’s 2-door body style) and a smaller departure angle (37 degrees). Ground clearance also is lower (10.8 ins. [274 mm]), as is its fording depth (30 ins. [760 mm]).

Land Rover says the Defender is its first model to have next-gen braking technology, using an actuator-controlled piston operated by the foot pedal to apply effort and deliver better control.

“The system comes into its own during low-speed off-road maneuvers and, when the traction control and emergency braking systems are triggered,” locking a wheel as quickly as 150 milliseconds vs. 300 milliseconds with a conventional setup, the automaker says.

The next-gen braking also is helpful to prevent rollback (Hill Launch Assist w/ Enhanced Hill Hold), “with a smoother transition from the brakes to power in adverse environments.”

A next-generation electronic architecture, dubbed EVA 2.0, is introduced on the Defender's interior.

The new architecture supports over-the-air software updates, allowing for them to “cascade down to the vehicle immediately” and be downloaded in the background via the Defender’s on-board data plan. Owners will be made aware when an update is available and can schedule the most convenient time. There are 14 individual modules able to receive remote updates, JLR says.

The new infotainment system has an always-on design for instant response, even at startup, JLR says, also promising fewer inputs are needed to perform “frequently used” tasks on the 10-in. (25-cm) touchscreen thanks to an “easy-to-follow” menu structure. JLR claims the infotainment redo results in an average 50% fewer steps than in previous Land Rover infotainment systems.

The Defender’s infotainment also has a backup battery to initialize the navigation system in “just seconds,” plus standard Apple CarPlay, Android Auto and wireless device charging, as well as the ability to connect two phones simultaneously via Bluetooth.

For navigation, self-learning algorithms and dynamic guidance are said to optimize routing, and Smart Voice Guidance can kill audio instructions when in familiar surroundings.

Maps on both the main screen and 12.3-in. (31-cm) digital cluster display (screens pictured below) are high-definition 3D, with the ability for the latter to display maps to keep the central touchscreen freed for other functions. 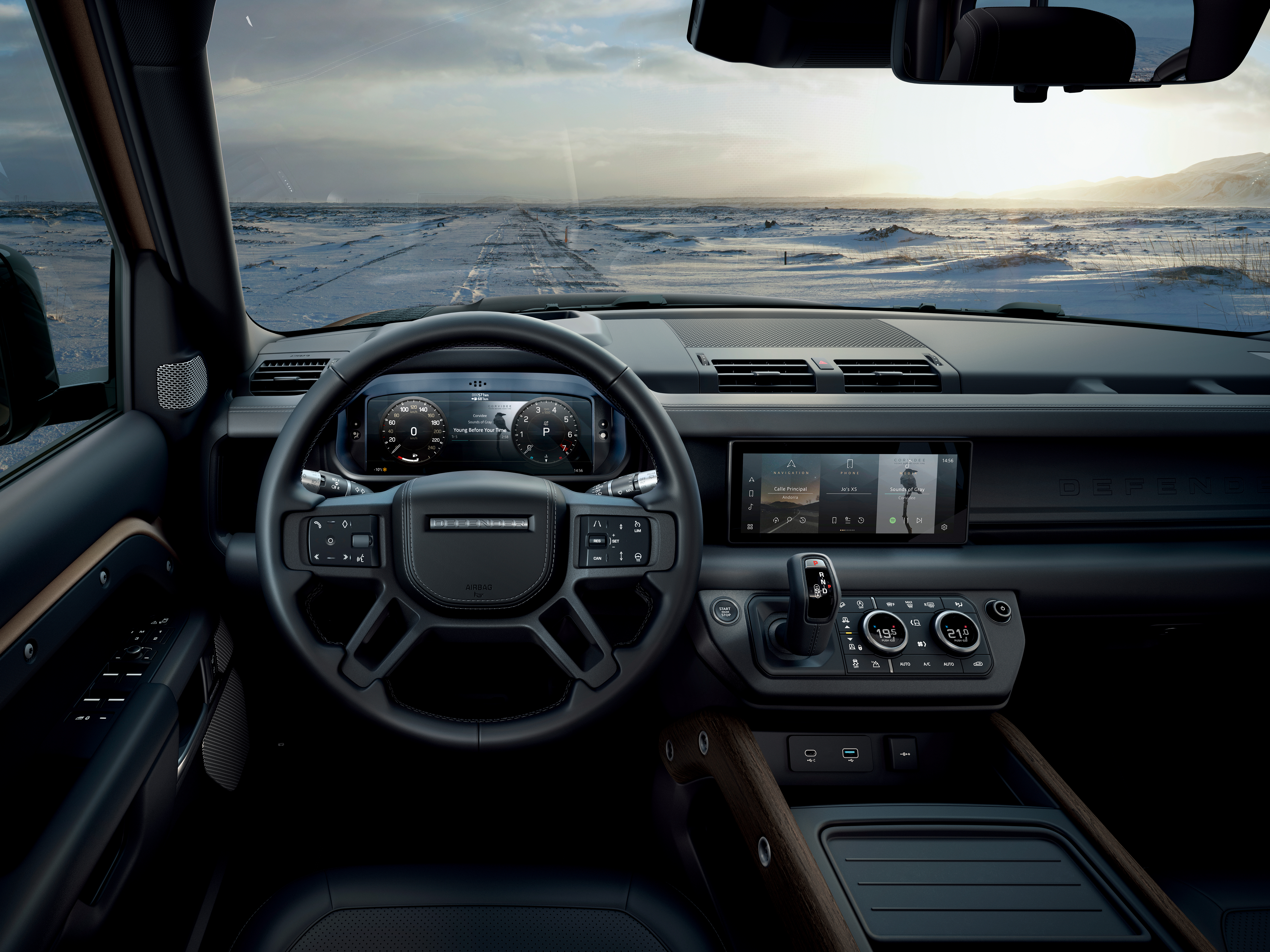 The configurable digital cluster can show full-screen 3D navigation, conventional dials or a mix of both.

A second-generation, full-color head-up display is said to limit driver distraction and has video capability to “replicate displays from the central touchscreen, including articulation graphics to assist the driver in off-road environments.”

Also enabled by EVA 2.0 are the vehicle’s advanced safety technologies, using a forward-facing digital camera, ultrasonic sensors and a 3Gbit/s onboard network. The cameras and sensors have one integrated processor (domain controller), JLR says.

A 3D surround camera provides 360-degree, and new 3D exterior, views of the area surrounding the vehicle. There is “enhanced augmented on-screen visualization” when certain applications are used, including Wade Sensing for fording deep water.

Standard within the Terrain Response 2 system, Wade Sensing automatically softens throttle response, sets the HVAC system to recirculate, locks the driveline and adjusts the ride height to the off-road setting, as well as automatically activates the Wade Sensing infotainment screen. When leaving water, the Defender automatically drags its brakes to clean and dry discs. Wade Sensing also assists with braking performance when the vehicle returns to dry ground, JLR says.

Front-jump-seat models get blindspot-eliminating ClearSight Rear View as standard, a digital rearview mirror showing a feed from a 1.7-megapixel rear-facing camera at the back of the vehicle. JLR says the camera has a “hydrophobic coating to maintain performance in wet and muddy conditions.”

JLR says Defender prototypes traversed the globe for testing in a variety of extreme environments. Engineers completed trails in Moab, UT, for the first time, including Hell’s Revenge, Poison Spider and Steel Bender.

The Defender is the first Land Rover to undergo enhanced validation testing for its electrical systems under a $45 million facilities and infrastructure investment by Land Rover.

Although the previous-generation Defender ended its 68-year production run in 2016, the SUV officially had been absent from the U.S. market for nearly 20 years at that point. It famously left the U.S. in 1997 after Land Rover opted not to modify the low-volume vehicle with front- and side-impact airbags, required U.S. safety equipment starting in 1998.

Prior to being asked to meet the airbag rule, Land Rover already had modified the decades-old 110 in the 1990s with a full external roll cage to help it meet roof-crush standards.

All this served to increase the exclusivity of Defenders and a black importation market for the vehicle developed in the U.S., including among some celebrities.

The new Defender is being assembled on a dedicated line at Land Rover’s new Nitra, Slovakia, plant, also home to the Discovery. The Defender previously was assembled in the U.K. at its historic Solihull, England, plant.