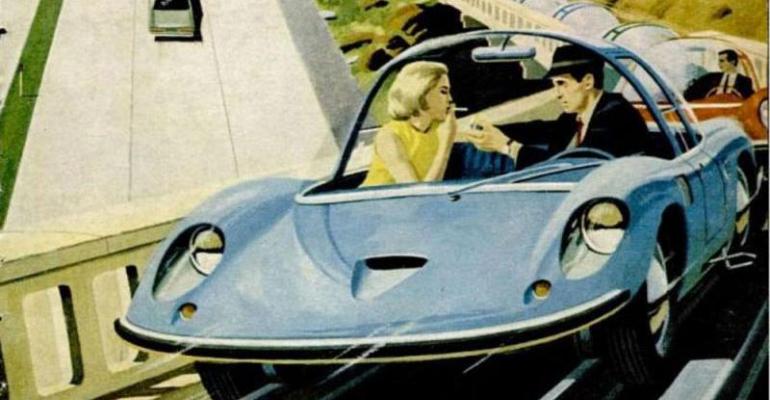 Aftereffects of the lengthy coal-industry strike in March and April continue to plague automakers in June. Shortages of sheet metal and iron force General Motors to close its Michigan foundry and assembly plants for the week of June 14, with output in the rest of the month hobbled as well. Chrysler, too, would have been forced to enact severe output cuts, according to Ward’s Automotive Reports, had it not endured a 17-day contract strike by the UAW-CIO in May. Ford has been least affected by the steel shortages thanks to a significant stockpile created in advance of its 6-week shutdown for changeover to the all-new ’49 models. Still, U.S. car and truck output in June is expected to end at between 425,000 and 450,000 units, bringing output in the first half of the year to an estimated 4,625,000 vehicles compared with prior-year’s 2,477,000. Barring any further strikes, U.S. production in the second half of 1948 is forecast above 500,000 units monthly. Other than strikes, the only thing that may prevent automakers from attaining their robust second-half goals is a labor shortage such as the one cited by Chrysler as the reason for initiating 6-day production rather than adding shifts. Chrysler says it has had problems recruiting enough workers to maintain even single-shift operations.

Speaking at a New York press preview for its new line of Ford cars, the company’s president tells reporters the automaker has a current backlog of 1.3 million orders that may take as long as two years to complete. He also says the backlog is expected to increase by 100,000 cars in the next 30 days as the all-new models begin to appear in dealer showrooms. Prices for the ’49s are increasing 8.7%, or $85-$125 on average, depending on trim levels and equipment. WAR also notes the 239-lb. (108-kg) weight reduction on ’49 models “makes for a still-higher ratio of horsepower to gross vehicle weight and accordingly snappier acceleration, all-around speedier performance and economy of operation.”

Introduction of Kaiser and Frazer convertibles has apparently been delayed from spring to late summer, at the earliest, the newsletter speculates. It says “hand-made jobs have been built, but no production models have as yet come off the lines.” At the same time, K-F is reported to be among the first automakers joining United Airlines’ new “fly to the factory and drive your car home” program. The savings in freight and handling charges are said to more than offset airfare to Detroit.

The Tucker cars recently demonstrated to the press indicates the automaker has abandoned, at least temporarily, many of the radical design features it initially proposed for the new model. Although it is powered by an aluminum 166-hp horizontally opposed rear engine, other features such as disc brakes, high-frequency ignition system and a unique automatic transmission featuring dual fluid couplings interposed with planetary gears will be offered at an unspecified future date. “If the long-term road performance demonstrates the engine is durable and the low center of gravity is such that not only normal curves, but those coated with rain and ice, can be safely negotiated, the conventional Tucker stands a greater chance for success than the previous empirical design,” the WAR says.

Introduced in certain ’58 GM, Ford and AMC cars, optional air-suspension systems are experiencing low take rates. Installations for the industry overall is just 2.5%, according to a Ward’s survey. Chrysler and Studebaker-Packard do not offer it. Installations by brand on ’58 models built through May range from just 0.3% at Ford to 14.7% at Cadillac. Overall, GM has equipped 91,000 ’58 cars with air suspension, a 4.7% rate, that includes 25,000 Chevrolets. In comparison, 2,500 Fords have been built with the system that is not yet offered on Edsel, Lincoln or Mercury models. AMC turned out 1,450 such cars, or 0.8% of its output.

GM is experimenting with a series of aluminum V-8s it hopes will improve performance and economy and, ultimately, reduce costs through less time-consuming machining of the blocks. The development engines reportedly weigh 30% less than conventional V-8s of the same displacement and horsepower. The test engines also are using so-far unspecified higher compression ratios than the 9.5:1 average of existing powerplants, but not as high as the 25:1 ratio GM has experimented with on some iron-block V-8s. In those tests the automaker says an engine begins to lose thermal efficiency above 17:1. The biggest drawback for aluminum engines is bore wear. Of various methods tried by engineers, the most effective was installation of cylinder liners made of high-silicon-content aluminum alloy. WAR notes that aluminum I-6 engines were built and tested by Alcoa as far back as 1917.

A moderate reduction in new-car prices is one possible result of the Monroney-​Thurmond price-sticker bill working its way through Congress. The House is expected to take quick action on the bill that already has passed the Senate. Requiring all new cars to carry a label showing the official manufacturer’s suggested retail price of the base car and any accessories will “in effect launch universal price advertising at the level of the suggested factory retail price, putting new emphasis on an automaker’s lowest base prices.” Any price cuts that occur likely will be accounted for by reducing the dealer discount, WAR says, due to rising costs of labor and material in the production process.

GMC has been given the green light to begin producing its V-6 and V-12 truck engines, according to word from tooling suppliers. The V-6 will be available in 304-cid (5.0L) and 351-cid (5.8L) variants, while the V-12 will be 608 cid (10L). The angle of the cylinder banks has not yet been revealed. While the V-6s will be offered in light- and medium-duty trucks, the V-12 is aimed at heavy-duty models, where its torque characteristics will be “welcomed by fatigued drivers suffering from the ordeal of constant gear shifting.”

GM, Ford and Chrysler are mobilizing against a Senate bill that would authorize them to give bonuses to car dealers that confine sales to their own territories. The automakers say they would rather see legislation such as that proposed by GM to “specifically legalize, as an exception to the anti-trust laws, territory-security plans and provisions as incorporated in dealer agreements of the past. Chrysler said it is in favor of giving dealers exclusive territories if a legal way can be found that doesn’t abridge the consumer’s freedom of choice. Prior to 1949, most dealer agreements granted specific sales territories, but that was abandoned after the Justice Dept. threatened anti-trust action.

Introduced in March, Chevrolet’s new Torque-Drive semi-automatic transmission, a $68.95 option of 6-cyl. Camaros as well as 4- and 6-cyl. Chevy IIs, could be installed on 40,000 cars annually, Ward’s says. The forecast is based on plans to install 15,000 units in April-June. The unit is fundamentally the same as Chevy’s 2-speed Powerglide automatic gearbox, but without the self-shifting mechanism. The driver can leave Torque-Drive in Hi or, for quicker acceleration, start off in “1st” and manually shift to Hi.

Automaker Toyota says it has begun developing, in conjunction with other members of the Toyota Group, a hybrid-electric vehicle. It will use both an electric motor and a gasoline engine as power sources. A prototype already is taking shape with Toyota’s Central R&D Laboratories supplying the battery pack, Nippon Denso the electric motor and controller and TMC the car body, engine and conventional running gear.

GM has completed a development study of future urban transportation needs for the Dept. of Housing and Urban Development. The transportation concepts envisioned in the study include: 1) Network Cab, small automatically controlled vehicles interconnecting major transportation hubs within a city; 2) Metro-Mode, a bus operating on a restricted route connecting the inner city with outlying suburbs; 3) Rail Pallet, in which individual vehicles are transported on railcars for longer trips within a metropolitan area; 4) An Automated Highway that increases safety, efficiency and capacity through the combination of electronic controls on vehicles and roadways; 5) Multi-Modal Capsule, a system in which a small passenger capsule is transported on two or more carries to its destination eliminating need for individuals to independently transfer from one system to another; 6) Bi-Model Bus that operates on electricity when navigating special guideways, but switches to battery power on ordinary streets, and 7) On-Demand Bus system that utilizes improved communication and scheduling to alter bus routes in response to high-demand situations. Meanwhile, the Cornell Aeronautical Laboratory is recommending what it calls the Urbmobile. It is a small electrically powered 4-passenger car the size of a VW “Beetle” capable of operating on existing streets or on high-speed automated guideways.

Spurred by seemingly “insatiable” demand for Chevy Camaro, Ford Mustang and Pontiac Firebird high-performance models, the V-8 share of engine installations in ’94 domestic-make cars has risen to 13.4% from 11.6% in ’93. The ’94 data is derived from Ward’s latest survey of optional equipment installations in domestic-make cars produced in the model run through March. Although ’94’s share is less than the 15.1% garnered in ’92, it is on par with the 13.7% rate

Saturn is seeking ways to pump up demand, says President Richard “Skip” LeFauve. Sales in 1994 will top 34,000 units, making the operation profitable, the executive says, adding that volume is forecast at 500,000 annually by the end of the decade. Increasing the North American dealer count and exporting to overseas markets are being researched as possible ways of increasing sales. But, he cautions not expect a new Saturn assembly plant any time soon even if demand increases significantly. First, output would be bolstered by enlarging the existing Spring Hill, TN, facility and/or utilizing part of a shuttered GM plant.

Ford says sales of the upcoming ’95 Ford Contour compact will be 35,000-40,000 for the remainder of 1994, following the car’s fall introduction. Deliveries in 1995 are expected to total 180,000 units. Sales of its Mercury Mystique companion are pegged at a minimum of 15,000 this year and 80,000 in 1995. Mondeo, the version of the car sold in Europe, has been on sale for 15 months with dealer orders totaling 500,000. Total sales of the two models are forecast at 70% with the base 2L I-4 and 30% with the optional 2.5L V-6. The Dearborn automaker says it expects some Contour/Mystique sales will come at the expense of the larger Taurus/Sable models, but buyers will see a big price difference between similarly equipped Contour/Mystique and Taurus/Sable cars.