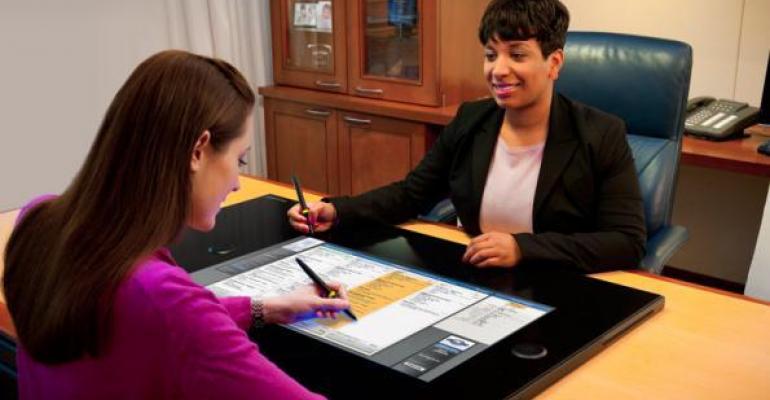 More dealership F&I offices are relying on computer tablets and similar devices in an effort to enhance aftermarket-product presentations and engage more with customers.

“They are visual and interactive,” Anthony Patterson, vice president-operations for the 13-franchise Patterson Auto Group in Wichita Falls, TX, says of the technology offerings that are changing traditional F&I practices.

“Regardless of how good an F&I manager may be as a salesperson, it is hard to overcome a customer’s in-a-corner feeling when they are in the F&I office,” says Patterson, who worked in F&I about a decade ago and is a two-time judge for the “F&I Innovator of the Year Award,” an annual event put on by EFG Companies and Northwood University.

To alleviate customers’ boxed-in perceptions, his stores use a Reynolds & Reynolds software-driven product called docuPAD. It resembles a supersized touchscreen computer tablet that allows the F&I manager and customer to go through menu offerings together.

“The customer drives it with the F&I person helping,” Reynolds President Ron Lamb said in a previous interview. “That is what changes the game.”

Another advantage to the new technology is that it prevents human error, Patterson says. “In the past, you could accidently put in wrong information. But today, the system won’t allow you to do that.”

Such technology is intended to shift the role of F&I managers from single-minded salespeople to helpful consultants, although salesmanship, however subtle, remains an important part of the F&I process.

“It is a 100% tablet organization, with the exception of the accounting office,” says Sharon Kitzman, Dealertrack’s DMS vice president and general manager.

Dealertrack offers a product called the Digital Retailing Showroom App that enables dealership personnel to use iPads and collaborate with a customer on a deal from start to finish.

“The tablet allows you to get side by side with customers rather than across a desk from them,” Kitzman says. “It makes for better interaction.”

Infiniti is encouraging its dealers to use ICAR-X, a mobile app the automaker developed. It is used in conjunction with computer tablets and other mobile devices. The goal is to expedite car deals, including the financing.

Once shoppers decide on a specific vehicle, ICAR-X allows them to submit credit applications and review financing and leasing options.

Proponents of such expanding technology say it’s not being offered just because it is available. Nor is it being forced on customers, they say. “The consumer is driving the change,” Kitzman says.

Marv Eleazer, finance director at Langdale Ford in Valdosta, GA, cites instances of technology improving F&I operations in need of help. But he adds, “Too much negative chatter about the traditional F&I model drives me nuts. The last time I checked, it wasn’t broken.”

He recalls a tablet software sales representative telling him her product helped stores in her territory increase their F&I profit-per-vehicle by a few hundred dollars.

“I asked her what the numbers were before the push, and quickly determined those stores were below average before they added the devices,” Eleazer says. “Technology helped make up the difference because it forced F&I managers to follow the process they should have been following all along.”

Some F&I managers do better using a device because it makes them do their job properly, he says. “So in these instances it makes sense.”

But no device can effectively replace training and expertise, he says. “My position is the general manager or dealer principal should be aware of the issues in their F&I department, hire and train the right people and then constantly monitor them for the desired results.”