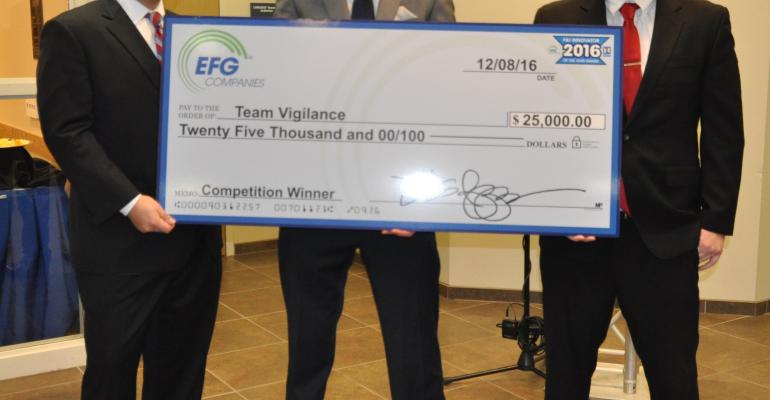 EFG Companies has awarded $25,000 to each three-student winning team in its F&amp;I Innovator of the Year competition.

A company that offers F&I products and services to car dealerships developed a new app-based product that combines ideas from both the 2015 and 2016 Northwood University Innovator of the Year Award winning proposals.

EFG Companies has awarded $25,000 to each of the two three-student winning teams.

•A loyalty-point tracker (if a dealership runs a loyalty-points program), where points can be redeemed for discounts on services provided or used as a down payment toward their next vehicle purchase with the participating dealership.

•A theft tracker that alerts consumers when their vehicle moves while they are not in it.

•A locator of service stations and their fuel prices.

“We did quite a bit of research with dealers and consumers and found this would be a powerful communications tool,” says Jenny Rappaport, EFG’s chief marketing officer.

It’s challenging for F&I providers to come up with fresh products and services, says John Stephens, EFG’s executive vice president. That’s why the company created the Innovator of the Year contest at Northwood, a Midland, MI-based university with a dealership management and marketing program.

“Young minds often are not as boxed in as older minds,” says Stephens, 55. While he believes some members of his generation will use the new app, “it speaks volumes” to tech-savvy Millennials.

The students impressed him. “They were awesome and engaging,” he says. “They’d ask rapid-fire, insightful questions during our conversations. I love the story that something like this coming to market originated with a student ‘think tank.’”

His dealership will begin offering the app to consumers between mid-December and early January. Although it’s possible to offer Driver’s Advocate on a paid-subscription basis (with the first 6 or 12 months gratis) Rohrich plans to offer it free to customers as a way to enhance the chances of regularly using the dealership group’s service departments.

Many of the services the app focuses on “is work we’re already doing through our ‘Rohrich Advantage’ program, but this will streamline much of our efforts” to attract and retain service customers by engendering their trust, keeping in touch with them and making their dealership experience memorable.

“There’s the old saying, ‘Dating is easy, marriage is hard work,’ Grimes says. “Buying a car is like the dating part. We want to show customers that the equivalent of getting married to us will be worthwhile.”

He cites an example: “We can be busy but we still make customers individually feel they are the most important person on the planet.” He sees the app’s service-work scheduler as helping the back shop’s work flow.

“This marks the first competition product rolled out to the market,” Northwood University President Keith Pretty says. “We expect great things from this product roll-out as it serves as a reflection of our philosophy of hands-on learning. This will give our current students the unique opportunity to see the impact their entrepreneurism and leadership can have on the industry.”

Northwood gets a percentage of potential revenues generated from Driver’s Advocate.

Grimes says he would love to say the team he mentored won the 2016 contest, but it didn’t. “Knowing how great my team did and the great idea they came up with, I thought the winning team must really be special.”

The Big Story: Behind the Scenes of the F&I Innovator of Year Contest
Feb 06, 2017