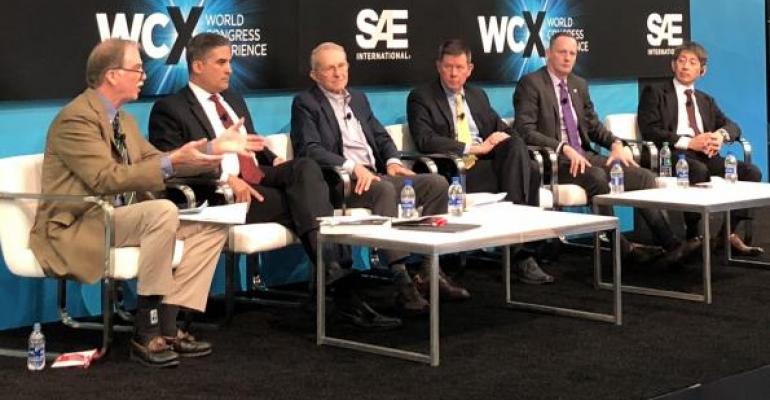 GM&rsquo;s head of powertrain heads to Capitol Hill to present the auto industry&rsquo;s case for creating a single, higher-octane fuel standard for the U.S. as a path toward more fuel-efficient and powerful internal-combustion engines.

“We’re optimistic – there’s never been a better time for it,” Nicholson tells WardsAuto following a panel discussion on the future of internal-combustion engines here at the SAE World Congress Experience.

Nicholson, vice president-GM Propulsion Systems, delivers the automakers’ plea to boost the regular-fuel octane level to 95 RON on behalf of the U.S. Council for Automotive Research, a consortium that seeks to strengthen the U.S. auto industry through cooperative research and development.

Nicholson is among at least eight speakers addressing Congress on the issue, including representatives from the fuel industry who are working with automakers in the push for a single octane rating. In the past, oil refiners have been resistant to octane increases because of added costs. Representatives of fuel distributors and the fuel station industries also are presenting to Congress.

Nicholson says the estimated 3% higher cost of what essentially would be premium fuel will be directly offset by a 3% gain in fuel efficiency. He notes octane ratings of 95 and above have been common in Europe for decades.

“America deserves at least as good a fuel as Europe has,” Nicholson says. “It will have customer value if it’s done correctly. We’ve studied it and we know that it’s cost-effective.”

Fellow SAE panelist David Filipe, Ford vice president-Powertrain Engineering, agrees the time has come to introduce higher-octane fuel as the U.S. standard. He says the increase in cost for higher-octane fuel is estimated at 5 cents per gallon over current 87 RON unleaded regular.

“If the market fuel octane becomes higher, with a stable supply, we can provide a much higher compression engine with more efficiency,” Niizato promises.

Panelist John Heywood, MIT engineering professor, suggests automakers might want to consider ways to use multiple-octane fuels in a vehicle, so that the right mix fuels the engine depending on use and power demand.

While Niizato says on-demand, on-board octane could be accomplished, Nicholson warns consumers expect instantaneous engine response, which may be hard to achieve when varying the fuel supply.

ICE Not Dead Yet

The SAE panel discussion, titled “Not Dead Yet – The Ever-Evolving ICE Powertrain,” also covered a wide range of topics from the growing potential for diesel engines in light-duty trucks and SUVs in the U.S. to the limits of transmission gear ratios.

Diesel offerings are increasing in light trucks, including in the Ford F-150 due this summer and GM’s newest Silverado and Sierra that arrive this fall to join the Ram 1500 EcoDiesel in the market.

Panelist Jeff Lux, FCA head of transmission powertrain, says while 11- and 12-speed automatic transmissions are possible, he believes the current crop of gearboxes in the 7.5- to 10-speed range are optimal, especially given increasing electrification.

“With the advances in ICEs, you likely can get by with fewer (gears) rather than more,” Lux says.

Nicholson and Filipe say they’re happy with the 9- and 10-speed transmissions the two automakers jointly developed. Nicholson says the next step for GM is offering “infinity” – a continuously variable transmission in the Malibu this year.

As for the rumored death of ICEs, all the panelists see traditional engines gaining efficiency and becoming electrified, but still existing under the hoods of American cars and trucks for decades to come.

“The ICE is not dead yet – we’re now in peaceful coexistence with electrification,” Nicholson says. “It’s a marathon, not a sprint.

“Higher octane is the cheapest way to get more efficiency and we should do that right away,” he concludes.

Niizato adds the ICE “will never die,” even as Honda projects building 1 million EVs by 2030.