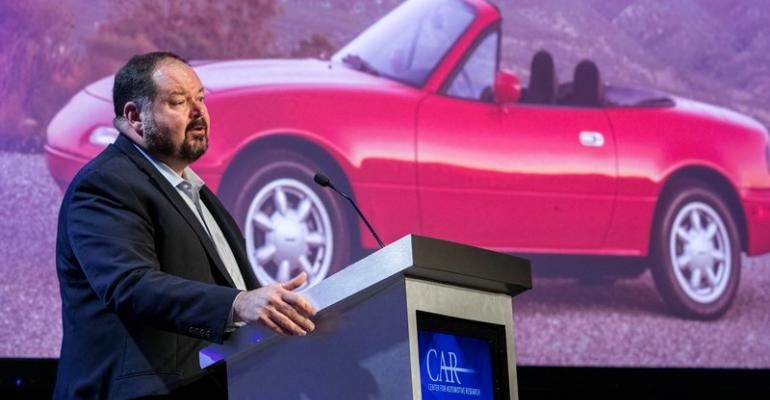 Whether gasoline, diesels or even rotary engines, Mazda believes automakers are in the best position to choose the right powertrain solutions that meet consumer needs and government clean-air mandates.

TRAVERSE CITY, MI – Governments should get out of the business of mandating or incentivizing particular types of powertrains and instead allow the automotive industry to find the best solution to meet a clean-air standard, a top Mazda official says.

“What we need as an industry is a target, and we need to be left to find the best, most customer-acceptable way to reach that,” says Robert Davis, senior vice president-special assignments-Mazda North American Operations, at a forum on advanced powertrains at the Center for Automotive Research’s Management Briefing Seminars here.
“Make it a (carbon-dioxide emissions) target, a grams-per-mile target, a fuel-economy number, whatever feels best. But don’t mandate that we have to sell a particular type of powertrain,” Davis says.

Mazda believes ICEs and related powertrain components have miles to go before they are supplanted by electrified propulsion.

So instead of using its limited R&D resources as a small automaker on developing niche alternative powertrains or downsizing its engines and employing turbocharging, Mazda’s SkyActiv powertrains focus on choosing the proper displacement for the size of the car and making those engines as efficient as possible, Davis explains.

As a result, Mazda SkyActiv engines have achieved a 30% fleet efficiency advantage compared with other automakers since 2001, and its 2.0L 4-cyl. is recognized as a benchmark in the industry, he notes. Adding electrification, including stop/start technology, will allow the automaker to see another 30% competitive edge, Davis says.

“We certainly considered the adoption of new technologies, like battery electric vehicles, plug-ins, hybrids and the like,” Davis says. “Before we go to the time, effort and expense of adding electrification, we are convinced that a solid, efficient internal-combustion engine base is critical.

“The foreseeable future will use the internal-combustion engine as its main motive source, so that’s where the bulk of our engineering focus has been placed,” Davis adds.

“Get the internal-combustion engine right, and it makes the whole system that much more efficient when you layer in electric systems, such as idle-stop, high-power charging systems with regenerative braking and ultimately series or parallel hybrids.”

“This is where the great thinkers in our industry need to speak up and be heard, to make sure that manufacturers can do what we do best: compete against each other for customers’ hearts and minds,” Davis says.

“We’re all better than this – we can do better than this. We need to consider that this is not zero emissions; this is remote emissions or displaced emissions. We need to work on the best solution for customers, and for the environment, with a common target and not an instruction manual on how to get there.”

Mazda has set a goal to achieve class-leading efficiency while staying true to the brand’s fun-to-drive mantra. The company is close to finalizing EPA and California Air Resources Board certification of its diesel 4-cyl. for the CX-5, Davis says, and even the rotary – the engine that made Mazda unique – remains a possibility.

“Mazda has always been committed to the rotary engine,” he says, “and that commitment remains as strong as ever.”