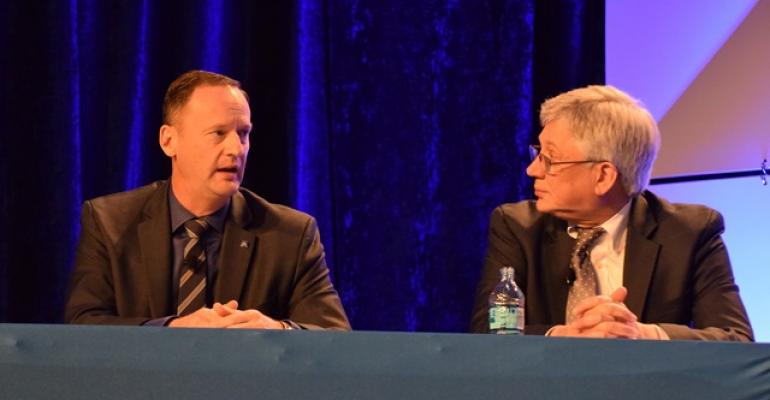 DETROIT – Automakers are turning up the volume in their campaign for higher-octane fuel, Honda is targeting thermal efficiency of future engines as high as 50%, V-8s will stick around and the outlook for automatic transmissions with more than 10 forward speeds appears bleak.

Those are some of the key points made by powertrain decision makers in a “Powering the Possibilities” panel session at SAE World Congress here last week, in addition to GM’s Dan Nicholson taking a swipe at the Tesla Model 3.

“I’ve been saying it for a year and it’s still true,” says Nicholson. “Higher octane, according to Dept. of Energy studies and other studies, shows a proven low-cost enabler to carbon-dioxide reduction.”

And while fuel rated at 98 RON or 100 RON is perceived to be more expensive, Nicholson contends it is a cheap, well-to-wheels solution that will result in improved real-world mileage.

Octane is an indicator of gasoline’s resistance to ignite when compressed in the cylinder. The higher the octane rating, the less likely an engine’s propensity to knock. Knocking puts extremely high pressures on engine components, and the damage can be severe. As a result, engine management systems today incorporate knock sensors to adjust ignition timing when necessary.

Fuel with higher octane greatly reduces many of these concerns, and there’s another important benefit: “You can raise compression ratio and everything else,” says Tony Ockelford, director-product and business strategy at Ford Powertrain.

“Raise the compression ratio and you are raising the efficiency of the engine,” he says. “One thing everyone on the panel would agree: 100 RON, if ever you could get there, is a nice place.”

But the topic may be revisited as automakers, the EPA and NHTSA begin a mid-term evaluation of CAFE standards this year.

“The only way we will get there is if we continue to push and find ways of working with authorities and other industries and do it in a collaborative way,” Ockelford says. “I think we have a responsibility to continue that push.”

Increased efficiency for all engines is reducing fuel consumption, which is hurting profit streams for oil companies, says Bob Lee, head of global powertrain coordination for FCA. But mid-grades and premium fuels are more profitable, so Lee is hopeful oil companies will see higher octane levels as an opportunity.

“I think the solution is there from a technology standpoint,” he says.

But if consumers understand the resulting fuel-economy gains, will they pay more for higher-octane fuel and if so, how much more? “We need to find balance, but I think it’s possible,” Lee says.

For all the efforts to improve engines over the years, most of them still achieve thermal efficiency of between 15% and 20%, which Schaeffler’s Hemphill calls “pretty horrible.”

But Toyota’s 1.8L Atkinson-cycle 4-cyl. in the fourth-generation ’16 Prius hybrid represents the first engine in the world to achieve maximum thermal efficiency of 40%. The propulsion system earned a Wards 10 Best Engines trophy in January.

Honda also is shooting for 40% thermal efficiency and beyond to further reduce CO2 emissions.

“Of course, we need smarter transmissions operating and improved fuel consumption. But we can reach 45% heat efficiency, which is our target for the near future,” says Ayumu Matsuo, who leads powertrain development as operating officer for Honda R&D.

Further down the road, the goal becomes even more aggressive.

“Honda aims to achieve more than 50% in peak thermal efficiency through innovating technology for the future gasoline engines,” Matsuo says, referring to accelerated research in mixed combustion and knock-free technologies.

Honda and General Motors are collaborating on a hydrogen-powered fuel-cell vehicle, but Nicholson declines to discuss a timeline for the project’s completion.

In this era of engine downsizing, an audience member asks if V-8s will be around long-term. The Detroit Three powertrain executives say their companies remain committed to V-8s well into the future because pickup buyers need them and muscle-car enthusiasts want them.

“How do we keep them relevant in a way that fits into the CO2 world?” asks Ford’s Ockelford. “That’s our task.”

FCA’s Lee promises his company “will have V-8s for a very long time. They may not be in some people’s minds economically priced because of the taxation that comes internally in our process. Something has to offset the V-8 in 2025.”

In other words, for every V-8 that FCA sells, CAFE standards will require the automaker to sell a certain number of EVs, HEVs or small fuel-sipping 3- or 4-cyl. engines to remain in compliance.

“Hopefully we get the customer to participate in that process a little bit to help us out,” Lee says.

As for multi-speed automatic transmissions, the executives agree 10 forward speeds represent the ceiling for powertrain efficiency. Beyond that, a CVT is the logical next step.

“If you were to consider 11 or 12 speeds, then control complexity gets significant quickly, and the fuel benefit gets very small very quickly,” Ockelford says. “CVTs may be good for some applications, but 8-, 9- and 10-speeds will be good for others.”

Lee actually sees the trend eventually reversing course. “As we get more electrification, we may see fewer speeds as we learn to use the electric motors more effectively and efficiently.”

The Chevrolet Bolt will beat the Model 3 to market, arriving by the end of this year as the industry’s first long-range BEV, projected to be more than 200 miles (322 km) per charge. Nicholson says the Bolt will be priced around $30,000 after federal tax credits.