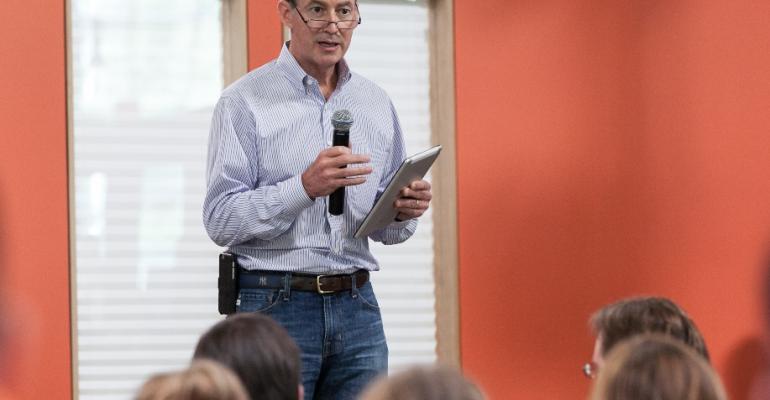 Mark O’Neil is a founding father of the auto-retail revolution.

He didn’t start out to dramatically change the dealership world by making it more customer-centric.

At first, he just wanted to buy a dealer’s struggling body shop. But the dealer had something else in mind, and ended up hiring O’Neil to run his stores.

From there, O’Neil, eager to put into play his developing ideas for a kinder, friendlier dealership experience, co-created Car Max, a chain of big-box used-car stores.

He later became CEO of Dealertrack, which started as an online car-loan aggregator but expanded into much more. In October, Dealertrack was bought by Cox Automotive, an amalgamation of digital-services brands that include Autotrader (buying and selling), Kelley Blue Book (pricing), Manheim (auctions) vAuto (inventory) and VinSolutions (dealership-management systems).

He sat down with WardsAuto for a Q&A. Here’s an edited version of that conversation.

WardsAuto: What are dealers telling you?

O’Neil: They like one-stop shopping for dealership software systems. The balance to that is they say we need to drive integration. Having it all is one thing, having it all work seamlessly is another.

WardsAuto: Is achieving that more a human or technology issue?

O’Neil: It’s much more involving systems; developing and writing code that will take information and push information seamlessly with systems talking to each other. It is building bridges between all the platforms we have. We are on a steady march towards that.

WardsAuto: Is it tough getting all the brands you oversee to collaborate better?

O’Neil: That clearly is a big challenge of how we come to market in a very integrated fashion. The COO role was created to think about a unified go-to-market, a unified product strategy, a unified operational strategy. We also created the positions of chief client-success officer and chief product officer. We’ve had some key organizational moves.

WardsAuto: You helped start Dealertrack. It began as an auto-finance aggregator but grew to include a lot of other things.

O’Neil: It was really narrow at first, basically connecting banks and dealers to originate a loan. Then it got into desking and e-contracting and DMS (dealer-management system) products.

WardsAuto: Was that the strategy?

O’Neil: I wish I could tell you it was. It was a derivative process of engaging our clients and getting their feedback. They’d say, “You do this and this for me, can you do that, too?” Typically, we’d figure out if we could do it and do it well. If we could, we’d add a new service.

Cox came along and said “We both share a transformation vision of how cars are bought and sold.” It was a natural fit for Dealertrack and Cox. We had complementary products, a shared vision and a common culture of being humble, team-oriented and just getting it done.

WardsAuto: You worked for a dealer group in the 1980s. What was that like?

O’Neil: It was a life opportunity. It just happened. I didn’t plan it out.

I was in the body-shop business with a partner. We started a regional chain in Wilkes-Barre, PA, near Philadelphia. We went to a dealer, Ron Ertley, and said “We’d like to buy your body shop. It’s not doing well, and it’s losing money.”

He said, “I don’t want to sell. How about doing something unique? You turn it around and you’ll get a percentage of revenues and earnings here.” We figured that was the next best thing. Within a year, it was very profitable.

Ron then said, “Can you help me with my dealerships?” He had 17 new-car stores and wanted to operate them more efficiently and profitably. Boom, all of a sudden I went from running a few body shops to running Ertley MotorWorld.

WardsAuto: Did you have any idea what was to come in your career?

O’Neil: I’m not that much of a visionary. I realized within six months of having the opportunity, I wanted to blow it up and completely redo it. I wanted to bring more technology in, take out the customer pain points, including some of the negotiating process. I realized it could be faster and more seamless.

This was 1989-1990, we’re going into a recession. Car sales were slowing down. Ron was worried about doing something so transformative at that time. And I’m a high-energy guy who’s been in the car business six months and wants to change the world.

I had the vision we could sell cars differently, but Ron wasn’t willing to take that risk. At about the same time, I got a call from the CEO of Circuit City who said, “I have this idea for a big-box store for retailing new and used cars. I’ve heard you want to transform the industry. We can create something new.”

I told Ron, “I can either do it here or do it there from scratch.” He gave me his blessings, saying he just didn’t want to risk it. So I became part of the team that created CarMax.

From CarMax, I kept seeing opportunities, and that led to Dealertrack. Ron is deceased now, but we remained long-time friends. I think he believed in the change, and that is why he encouraged me to do it (elsewhere). But it was his money at risk during a tough economic time. The financial leap of faith was too much for him.

WardsAuto: What did you want to redo exactly?

O’Neil: At the time, the customer engagement was not really friendly at dealerships. The negotiating process was not fun; most customers said they didn’t like it. So I said, “Well, we don’t have to negotiate; I can give a good price right up front.” They also worried about car quality; nobody back then really backed vehicles.

Why CarMax Went the Used-Car Route

WardsAuto: CarMax now has a few new-car dealerships, but it is mainly a used-car chain. Why did you go that route?

O’Neil: We wanted to launch Car Max as a new-car franchise, but at that time no public company held a franchise. No one wanted to give us a franchise, so we set up a used-car operation.

We wanted to build a trusted brand and make the process of buying something so expensive and big and material fun. That’s how it started out, changing a part of the industry. It was a team effort, and we did it very well. We were on to something.

One thing we expanded on was the financing process as to how to bring banks into a network and give the consumer the opportunity of financing choices and the ability to see those choices. It’s a great selling tool to say, “We sent your loan request to three banks and here are their offers.”

We also looked at sales volume by not taking advantage of one customer over another, but collectively giving every customer a good deal. It is very similar to what we talk about today with dealers about creating a great experience.

WardsAuto: Do most dealers “get” that?

O’Neil: They all get the importance of delivering a good experience. Many dealers still want to negotiate pricing, believing they can do it in a way that still delivers a good customer experience.

Many now are limiting negotiating to hundreds of dollars, not thousands, which means the asking price is competitive and transparent in the first place.

WardsAuto: So the band of negotiations has narrowed?

O’Neil: The band is very narrow. And dealers are using technology to speed up the car-buying process and experience. Let the computer do stuff that can be done by a computer. The human side is the relationship-building, selling and asking for the sale. Someone doing that and using all the available (digital) tools to make it as efficient as possible is our vision.

WardsAuto: Will the dealership of the future just be more of what we are seeing now, or will it undergo another transformation?

O’Neil: It will be an evolution of what we have now. When you walk into a future showroom, you will see more technology. You’ll see kiosks, touchscreen TV walls. You’ll see virtual-reality stations that simulate a test drive if, say, it’s a rainy or snowy day and someone doesn’t want to do an actual test drive.

It will be a very technology-centric and technology-enabled showroom.