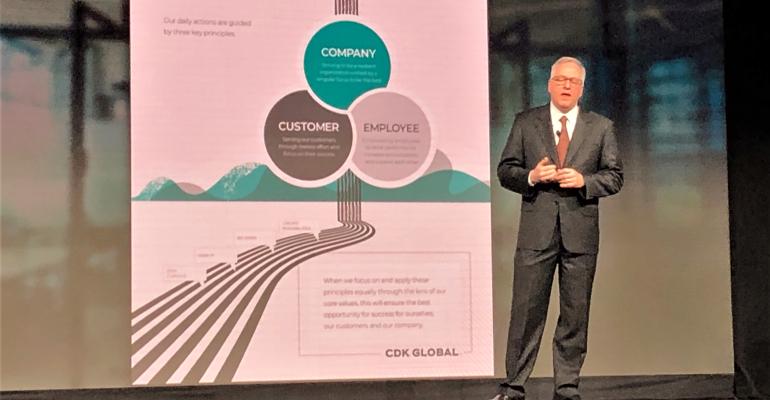 DETROIT – CDK Global will open the equivalent of a digital express lane for purchasing cars.

The automotive software provider previews CDK Sales Express, due out next year and touted as a streamlined process that can reduce a consumer’s in-store time from hours to 30 minutes.

The company also unveils plans to make it easier for other software vendors to plug into its central computer operating system at the behest of dealer clients.

Billed as an auto-retailing first, CDK Sales Express allows car shoppers and salespeople to more uniformly use digital tools to conduct much of the car-buying process, then wrap things up in minutes at the dealership.

With many online auto-retailing systems “there’s too much jumping around,” says CDK CEO Brian MacDonald. “What’s needed is a unique buying experience.”

Adds Mahesh Shah, the company’s chief product and technology officer: “Some dealers say they need 10 windows to sell one vehicle. CDK Sales Express cuts out a lot of wasted time.”

At a gathering of automaker representatives, car dealers and journalists here, the company also introduces an initiative dubbed “Data – Your Way.”

That lets dealers securely import and export data from CDK software and, moreover, allows dealers to connect directly with their choice of independent software vendors.

The latter is a big deal in auto-retailing technology. That’s because CDK and fellow automotive IT giant Reynolds & Reynolds in the past have been accused of impeding other software providers from integrating with their central computer systems at dealerships.

CDK has tried to shake that rap in recent times.

Data – Your Way “ushers in a new era by giving dealers the tools to access data securely and the choice of which software vendors to share it with,” says MacDonald, adding that dealers “can work directly with any data provider you use.”

He calls the new initiative “a paradigm shift in how we do business with our customers and a significant step forward for both dealers and automotive retail.”

CDK next March will eliminate license fees charged to other vendors who provide a variety of software services to CDK’s dealer clients.

CDK will transition away from its so-called Partner Program and begin giving dealers and vendors the option to work directly with one another or use CDK’s managed services programs.

In the changing world of auto retailing, CDK is betting on the traditional (but evolving) dealership model, as evidenced by MacDonald’s comments during the gathering at the historic Gem Theater in the Motor City’s downtown district.

“We believe dealers will be the dominant channel moving forward,” he says. “Some people believe (car buying) will be click-to-order. We at CDK don’t believe this.”

He adds: “We put our money where our mouth is by investing in dealerships.”

MacDonald cites company research that indicates most car consumers “want a connection with dealers.” That ranges from talking to a product specialist to taking a test drive.

“Ninety-four percent of people who bought a car in the last six months visited a dealership,” says MacDonald, adding that only 1% did virtually the entire transaction online and had the purchased vehicle delivered to them, despite the buzz about that remote purchase method.

Electric-vehicle shoppers in particular rely on dealerships to answer questions and discuss the products, he says. About three out of four EV shoppers say they want to interact with dealers, according to CDK data.