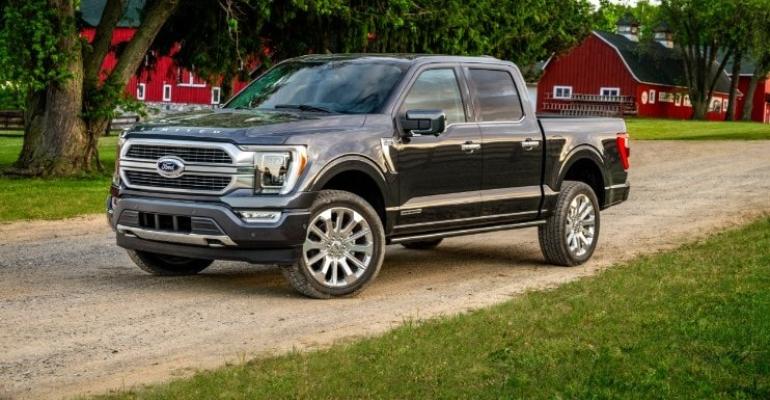 Dealers know that used vehicles are hot commodities now that new car inventory for most manufacturers is at record low levels.

The question is what vehicles are the most profitable for dealers to snap up?

Recently Karl Brauer, iSeeCars executive analyst, told Wards about some three-year-old used cars that were worth more than when they were new.

But dealers who can’t snag one of those popular and profitable models may want to concentrate on acquiring full-size pickup trucks.

A recent study of vehicle popularity by iSeeCars.cars found light-duty trucks took the first three spots on a top 10 popularity list of used vehicles sold in the U.S. last year. 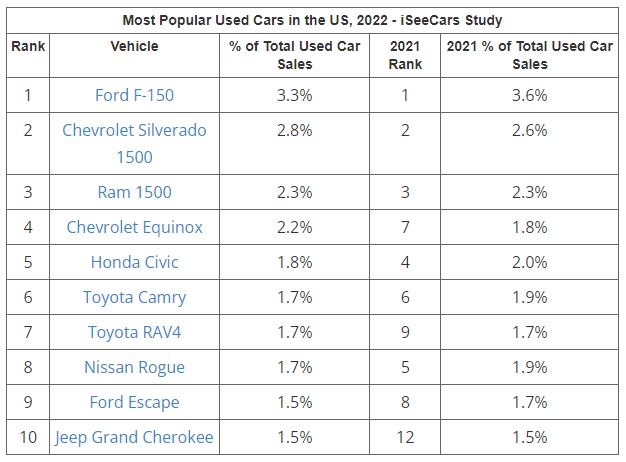 The F-150 pickup – a Ford best seller in the new-vehicle market – placed first in the 2022 used-car popularity. The Chevrolet Silverado 1500 and Ram 1500 placed second and third, respectively.

In compiling the list (left), the company analyzed about 10 million used-car sales from the previous five model years.

Only two cars made the top 10: the Honda Civic (No. 5) and Toyota Camry (No. 6), indicating continued overall waning car interest in the U.S., yet also showing the steadfast popularity of those two particular models.

Four cross-utility vehicles made the most-popular list. The midsize Chevrolet Equinox placed fourth, followed by three compact CUVs: the Toyota RAV4 (No. 7), Nissan Rogue (No. 8) and Ford Escape (No. 9)

Noting that the new- and used-vehicle markets are interlinked (every used vehicle starts out as a new one), he says pre-owned pickups’ popularity is largely because slews of them are on the market.

“Pickups have built so much momentum in the new market, it is hard to get away from them being best sellers in the used market,” Brauer tells Wards.

Referring to the three smallish CUVs on the top-10 list, he says their segment is “the sweet spot” for cross utilities, vehicles built on car platforms rather than traditional body-on-frame SUVs.

“Those compacts are hugely popular because of their price, styling, flexibility and fuel efficiency,” Brauer says. “Second only to full-size trucks, the compact crossovers have become the most sought-after vehicle in the U.S.”

Although pickup trucks and utility vehicles are more popular than sedans in the U.S., Brauer doesn’t consider cars as an endangered species. “Cars have an advantage over SUVs in weight and performance.”

"The draw of utility vehicles stems from American vehicle buyers becoming more practical,” he adds. “And consumers like the idea of being able to off-road in a utility vehicle even though the vast majority of people don’t.”

Although the new- and used-vehicle markets share similar dynamics, the big difference between the two is price.

“New-vehicle buyers are less price sensitive and a lot of them want something completely new; a vehicle that hasn’t been driven by a previous owner,” Brauer says. “Used buyers want to buy something less expensive. And they don’t have an issue with buying something someone else has driven.”