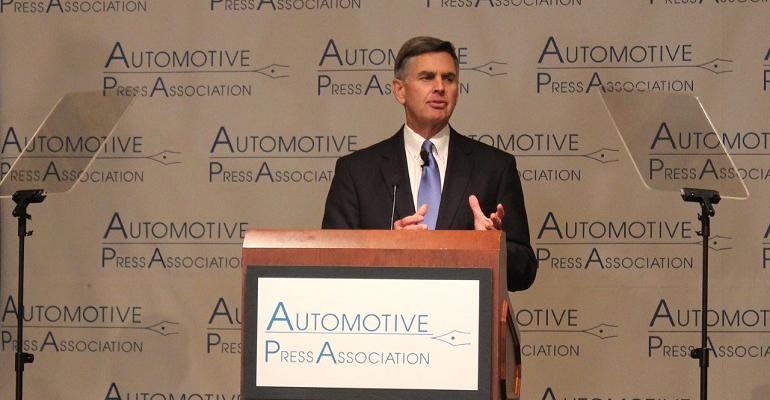 Charles Cyrill
“We cannot escape, nor should we try to undo, the reality that the U.S. auto industry is built on a favorable trading relationship with our two biggest trading partners – Canada and Mexico,” says 2019 NADA Chairman Charlie Gilchrist.
Dealers

DETROIT – A proposed U.S. trade agreement with neighboring Canada and Mexico gets the backing of the National Automobile Dealers Assn., says its chairman, Charlie Gilchrist.

The U.S.-Mexico-Canada Agreement – better known as USMAC – “will preserve the global competitiveness of the U.S. auto industry and enable dealers to continue providing affordable vehicle options for American consumers,” Gilchrist tells a gathering of the Automotive Press Assn. here in the country’s auto capital.

It would also reduce the threat of tariffs on vehicles and parts by exempting those produced in North America, he says. “That is a big deal.”

Gilchrist, a Texas dealer, credits President Donald Trump’s administration for the proposed agreement that Congress is expected to consider in November.

“We think it’s a good deal,” Gilchrist says. “It requires a higher content of U.S. parts. It will create stability and also create jobs in the U.S.”

USMAC would replace the North American Free Trade Agreement that Trump has rapped, alleging it is not as favorable to the U.S. as it should be.

During a Q&A after his prepared remarks, Gilchrist is asked what’s wrong with NAFTA that it needs replacing.

Without going into details, he replies, “NAFTA was 25 years old. This is modernizing.”

Of USMAC, he says, “We cannot escape, nor should we try to undo, the reality that the U.S. auto industry is built on a favorable trading relationship with our two biggest trading partners – Canada and Mexico.”

Detractors have criticized Trump for his use and threat of tariffs on the premise that they enhance the U.S. job market. Particularly condemned is a proposed 25% levy on overseas auto imports.

Gilchrist pans that, while diplomatically crediting the President for understanding the auto industry even though critics say he doesn’t get it.

But NADA is dead set against the proposed 25% import tariff. If that materializes, “it would be a huge issue for us,” Gilchrist tells journalists. He predicts it would result in fewer U.S. auto sales, higher vehicle prices and massive job losses, including an estimated 117,000 at dealerships.

“That’s untenable and unacceptable,” Gilchrist says. “I don’t think for a second President Trump wants that.”

Trade negotiations are a better way to go, he says. “The auto industry has been clear from the beginning: Broad-based auto tariffs, like the ones that are being threatened on a ‘national security’ basis, would wreak havoc on our industry.”