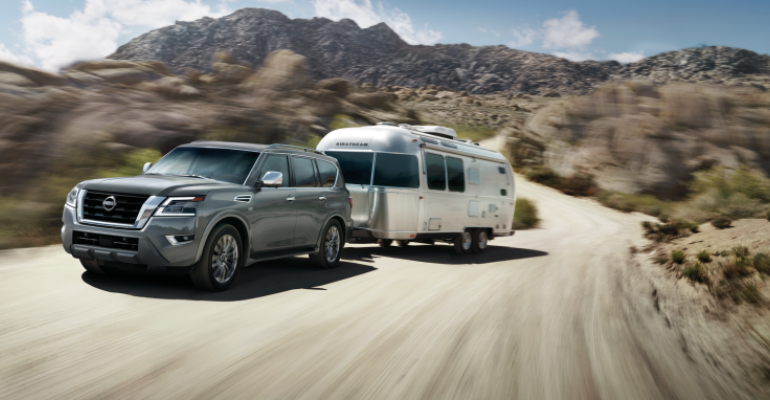 Nissan
The price of the Nissan Armada dipped 7.4% between July 2021 and 2022, according to ISeeCars' analysis.
Dealers

Dealers who want to keep customers coming through the doors and inventory flowing should focus on used-car models with prices that decreased or minimally increased during the past year.

An iSeeCars analysis of 1.8 million used-car sales found trucks and sports cars have the most negligible price differences between July 2021 and July 2022. Four of the vehicles are from Nissan (Armada, Titan, Titan XD) and its luxury brand Infiniti (QX60). 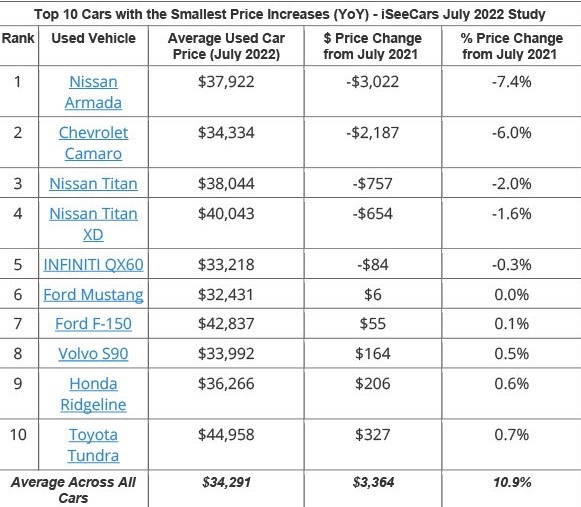 iSeeCars analyst Karl Brauer calls such decreases unprecedented in the last 18 months. "It looks like we are gaining some stabilization," he says. "I don't think demand is dropping, but there are economic concerns."

July 2022 marked an overall 10.9% increase in used-car prices, up from the 10.5% increase in average used-car prices in June 2022. The latest bump in prices marks the second month of slight increases fueled by alternative-fuel vehicles, primarily hybrid and electric cars. Most buyers of those models have high incomes and strong credit scores.

The Nissan LEAF has the highest price increase, up 43.8% compared with July 2021. That model was once the quickest-depreciating car on the market. Rising gas prices and the increased range of the 2018 model contributed to the increase, Brauer says.

Interest in the Tesla Model S waned in recent months as consumers gravitated to the Model 3 and Model X SUV. The long wait times for the newest version of the Model S, with a March 2023 estimated delivery date, brought shoppers to the used models, Brauer says. The average price increased 27.3% between July 2021 and July 2022.

Although dealers seek in-demand, higher-priced used-car models that boost their profits, Brauer suggests dealers that want to maintain shopper traffic and inventory turnover should seek value-priced models. Plus, it opens new revenue streams in service and parts for underserved shoppers, he adds.

"Those cars perhaps don't have quite the profit margin (of more in-demand models), but they would allow me to cater to lower-income people to maintain a high profit margin," Brauer says. "If you can get one of the lower-priced models for a good deal, you can probably still flip it because people say, 'I was not going to buy it, but that vehicle is so cheap compared to other models I've seen, I'll buy it.’"