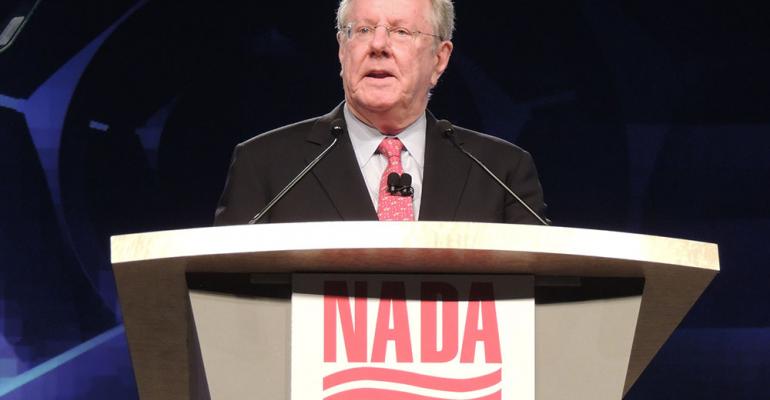 Steve Forbes Hits All the Right Notes in Talk to Dealers

The one-time presidential candidate predicts a rollback in CAFE ratings, slams the Consumer Financial Protection Bureau and calls for simpler income taxes and a free-market approach to health care as ways to boost the economy.

NEW ORLEANS – Multi-millionaire Steve Forbes didn’t succeed in his two presidential bids of more than a decade ago, but he appears to win over auto dealers here in a keynote speech that touches on many of the industry’s hot buttons.

In a presentation closing the NADA Convention and Exposition’s first day, the chairman, CEO and editor-in-chief of Forbes Media, predicts a rollback in CAFE ratings, slams the Consumer Financial Protection Bureau that is pressuring dealers over loan-origination fees and calls for simpler income taxes and a free-market approach to health care as ways to boost the economy.

Dealers have argued the law will crimp new-vehicle sales, and Forbes agrees.

“People want the cars they want, not what Washington thinks they want,” he says. “So that’s going to change.”

Forbes says regulations are needed, but too often government overplays its hand. He points to the CFPB, which is calling for dealers to stop varying loan-origination fees, a practice the bureau says often leads to higher charges for minorities.

NADA contends a flat fee would make dealers less competitive and deny consumers access to lower lending rates. If the CFPB has evidence of discrimination, the dealer group says, it needs to make it public.

As for rising health-care costs, Forbes says the trend would reverse itself if people were allowed to shop for insurance plans nationwide, a move he contends would force insurers and health-care providers to compete for customers with more attractive pricing.

For proof of concept he points to the now widespread availability of inexpensive flu shots.

“You can almost go to a gas station and get a flu shot,” Forbes says.

He also calls for a flat income tax, saying the current tax code is “beyond repair. Let’s put a stake in its heart and start over.

“And any talk of raising taxes is counterproductive and just plain stupid,” Forbes adds.

The U.S. economy is recovering, but  it could perform better if his roadmap is followed, he suggests.

“Do that and you’ll see the economy take off like a rocket,” Forbes says.