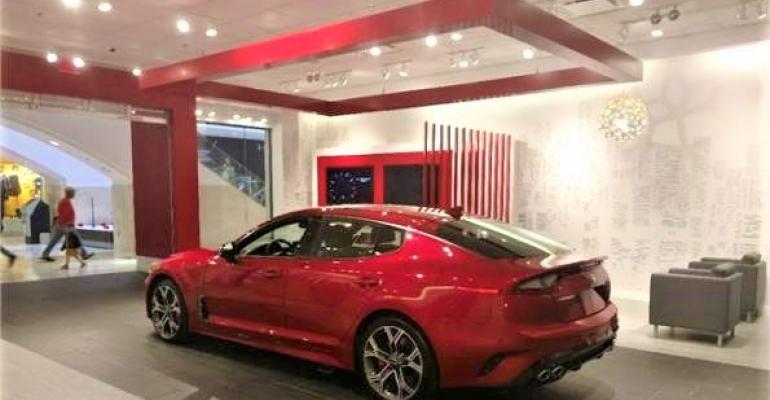 &ldquo;The idea was to create a unique, minimalistic, interactive place where the car was the star,&rdquo; says Wael Berrached of Eview 360, which designed the spots.&nbsp;

That’s special because not every car gets its own mall unit. (And not every mall gets what’s dubbed as a Kia Salon).

Kia Motors America opened the interactive mall spots to promote both its new sporty hatchback that has garnered much buzz since its 2017 debut and the brand itself, showing how far it has come.

“The idea was to create a unique, minimalistic, interactive place where the car was the star,” says Wael Berrached, chief creative officer and founder of Eview 360, the company that designed the salons.

“People come in, walk around and get an understanding of what the car is all about,” he tells WardsAuto.

They can don virtual-reality headgear to visualize the Stinger in a wind tunnel and other environments. VR also lets them delve into the inter-workings of the car.“They can lift out the engine and spin it around,” Berrached says.

He notes the salon design “is not over the top because that’s not Kia.”

In addition to highlighting the new Stinger, the salons are intended to show how far Kia has come since the South Korean brand began selling cars in the U.S. 26 years ago. That initiative started modestly (and locally) enough at four Portland, OR, dealerships with a single econobox, the Sephia. Today Kia U.S. dealers sell 17 models including CUVs, SUVs, sedans, compacts, hybrids and plug-ins. The Stinger starts at $31,900.

The mall spaces spotlighting the sleek Stinger range from 1,000 to 2,000 sq. ft. (90 to 180 sq. m). Product specialists employed by Kia are on hand to field questions and engage with visitors but not sell the car. Dealers do that.

“Any captured leads are forwarded to the dealers,” Berrached says. “They support the salon idea, because it is marketing in their region. It’s an opportunity to reach more people and get them into the local dealership.

“From Kia’s perspective, it’s educating consumers about the Stinger and where the brand is going.”

In the works are more salon openings, including at the Domain in Austin, TX; Mall of Georgia in Buford, GA; Valley Fair Mall in Santa Clara, CA; and Irvine Spectrum in Irvine, CA.

Kia tracks not just visitors but how they interact with the VR equipment and video games available onsite.

The Kia salons represent new-age marketing, Berrached says. “The mini-spots are there to tell a story. The future is experiential retail, where basically you are creating stories that are vibrant and fresh.”

That means they change. “The salons will be updated with different elements and stories to continue the conversation,” Berrached says.