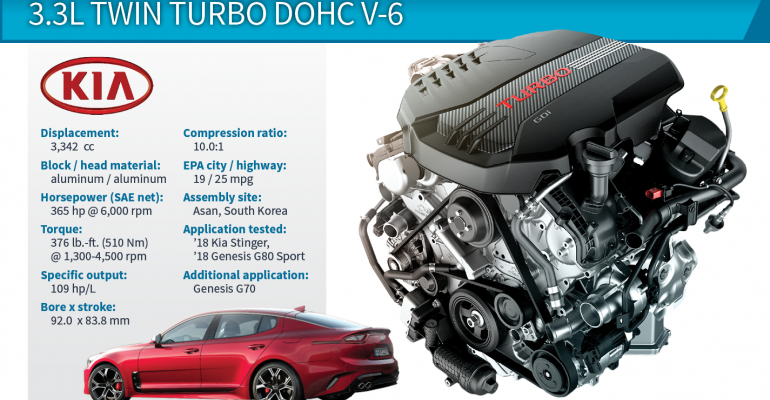 While sister-brand Hyundai is no stranger to our Wards 10 Best Engines list, 2018 marks the first time Kia is making an appearance with one of its engines.

And what an engine it is.

Hit the throttle and that thrust arrives as quickly as 1,300 rpm, making it easy to get up to pace with traffic, or exceed the speed limit when entering a freeway. Kia says 0-60 mph (97 kph) can arrive in 4.7 seconds, besting some Porsche Panameras.

What’s also great is that peak torque sticks around all the way up to 4,500 rpm. Passing slow-moving big rigs when cruising along at 70 mph (113 km/h)? Not a problem in the Stinger.

While it can sound like a V-8 under hard acceleration, the 3.3L also is remarkably sedate when it needs to be, such as puttering around town running errands. Noise, vibration and harshness is limited with a plastic dual recirculation valve within the turbocharger, among other things.

The 3.3L mill, developed by Hyundai-Kia’s joint engineering team, has several unique features, including a sodium-filled stem and head on each exhaust valve, which the automaker says is an industry first among V-6s.

Valve stems have been sodium-filled for decades, but extending that treatment down to the head reduces weight and enables the valve to dissipate heat and stay cooler, improving spark-advance performance, Hyundai/Kia engineers told WardsAuto last fall.

Another technical component of the new engine that Hyundai/Kia is claiming as a first for a V-6 is the cam-torque-actuated mid-lock continuously variable valve-timing system.

At startup, the intake cam phaser is locked in the middle position to deliver faster transient response. During casual driving, the system allows for delayed closing of the intake valves, which reduces pumping losses and fuel consumption.

Not an industry first but new for Hyundai/Kia V-6s is the integration of an exhaust manifold in each cylinder head. Without separate exhaust manifolds, each turbocharger attaches directly to the exhaust port of each head, improving packaging and allowing the catalytic converter to heat up faster, reducing cold-start emissions and making the 3.3L twin-turbo emissions compliant in all 50 U.S. states.

WardsAuto judges also tested the 3.3L in its other U.S. application, the Genesis G80 Sport mid-large sedan, but in the end preferred the engine’s go-go nature in the lighter Stinger, similar in size to the forthcoming Genesis G70 4-door not yet on sale in the U.S.

Kia’s had decent engines over the years, but the new 3.3L is truly remarkable. It sells not only the Stinger but the entire brand.