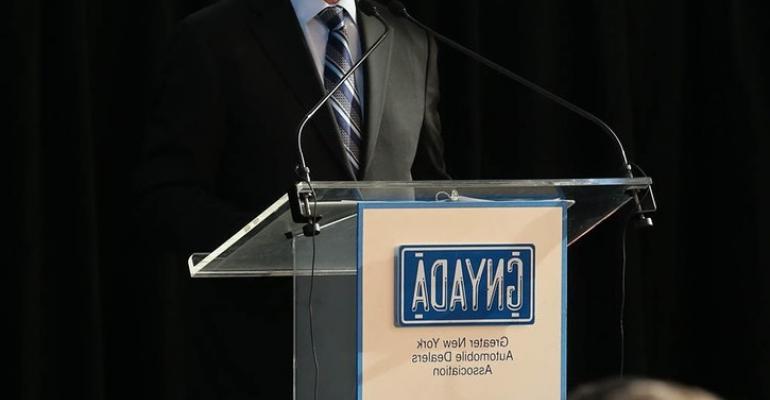 For a disconcerting moment when things turned ugly, Mark Schienberg thought he might lose his job at a meeting he had convened.

Instead, the meeting ultimately led to the Greater New York Automobile Dealers Assn. building and operating a training center for prospective dealership employees.

The idea for the center came from Schienberg, president of the trade group representing 400 dealers in the metro New York area. Last month, 250 people gathered for the 10th anniversary celebration of the Center for Automotive Education and Training, a $30 million 90,000-sq.-ft. (8,361-sq.-m) facility in Queens.

“This type of education and workforce development is just what we need,” says U.S. Sen. Charles Schumer (D-NY) at the center event. “Every industry should be doing what you are doing.”

In a WardsAuto Q&A, Schienberg talks about the facility, its mission and accomplishments. Here’s an edited version.

WardsAuto: How did the idea for the center come about?

Schienberg: From a lot of different things. What comes to mind the most is a meeting we held at the association headquarters with dealers, manufacturers and consumer agencies. One of the things we were talking about was how to make the dealership sales and service experience as good as can be.

The consumer agencies had us high on the list of complaints that they had. So we said, “OK, what can we do together to make it all happen?”

I thought this was going to be a brilliant meeting, by the way. I said a few words and opened it up for discussion, and nobody said diddly-squat. I remember thinking, “This could be my last meeting here.”

Then someone started to speak, and it got a bit nasty. Everyone was attacking each other. But at some point, it started to work itself out. One of the things you kept hearing was preparation and training and keeping up the pace. I started educational programs before that, but this really brought it home. There wasn’t any place the dealers could send their people to for training. There was some factory training, but not convenient or local. It got us thinking if we are going to do something, we’ve got to put our money where our mouth is.

WardsAuto: Nationally at the time, there was a shortage of qualified auto technicians. Was that shortage a factor in deciding to build the center?

The U.S. Department of Labor at that time was saying there was a 50,000 to 60,000 worker shortage of technicians. The average technician at that time was 47 years old. People were retiring. Some were having trouble embracing new automotive technology. Dealers basically stalked workers from other stores. You would grab workers from other dealerships. So that was a big thing, absolutely.

WardsAuto: Is it basically auto technicians or does the center train all sorts of dealership people?

Schienberg: It does. On the tech side, we went to Lincoln Tech. Fifty percent of the building’s operation is that. The other part is classrooms, conference rooms, mock showrooms for selling cars. We do training on every aspect of the business. You name it, we do it.

We put on 60 to 65 seminars a year there on different aspects of the business. And about 15 manufacturers use the facility for their specific training.

WardsAuto: Your dealer association put skin in the game, but needed some government financial help with a project like this. How did you approach public officials and convince them to aid the cause?

Schienberg: It was a $29 million venture, and we knew we’d need to go out financially to fund this thing. We also went to the state and showed them our studies about the workforce shortage and about the kind of careers that are out there, and the kind of money people can make in the auto industry. That surprised them to no end. It was people who could have families and buy homes and do things everyone else does.

WardsAuto: Including paying taxes. One would imagine that might interest government.

Schienberg: Yes, and these jobs would stay in the communities, they weren’t going to be shipped overseas. The investment made on this would be poured back into the community.

It is not so much dealer development but job and economic development. We showed them that local dealerships employed 29,000 directly and 30,000 more indirectly. We ultimately got roughly $3 million from the state to help support this.

I was just with the governor today about a Javits Center expansion (home of the annual New York International Auto Show put on by the local dealer association), talking about how the industry is doing and sales-tax revenue and jobs and how the center is going. He’s really happy with what’s gone on here.

WardsAuto: Were there any surprises along the way, good or bad?

Schienberg: I always say it is a work in progress, even today, 10 years later. I’m always saying, “How do we keep this going?” On the other hand, the only way a business survives, especially in the auto industry, is to have well-trained personnel.  I knew in the core of it, this was needed. What I didn’t expect was how much the manufacturers would start to embrace the center in such a significant way. In the beginning, they weren’t big players in education.

They did it as a necessity here and there. But now, with the need for trained people to work on advanced-technology cars and work on other things like sophisticated digital marketing, the manufacturers have become involved in a major way in education. It has helped everything we’re doing. It’s gratifying because the association board took a big risk on this project. There was no model to go by. It was the right decision.

WardsAuto: Was there any “Wow, I wasn’t expecting that to happen,” aside from the silence in the room at that meeting?

Schienberg: That I kept my job was a big surprise.

During some of our earlier anniversary ceremonies at the center, we talked about wishes and aspirations. This time around, we talked about accomplishments. One of the speakers was a young woman who started out as a receptionist at a dealership on Long Island and now she is the general manager.

She talked about how she knew she wanted a dealership career but didn’t know where to go until she came upon the center and started taking every seminar class she could.

Until she spoke at the event, I didn’t know the extent of the impact the center had had on her and others. I started tearing up. I thought, “This center was a good business move but, wow, we’ve really touched lives.” That’s the best part. We had a number of people speaking at the event about going through the center, going through Lincoln Tech, and describing where they are today.

WardsAuto: New York City does things on a big scale, but do you see something like the center operating on a smaller scale in a smaller market?

Schienberg: Each one is probably different. A lot of associations have put together good programs over the years. Barbara Miller in central Florida has one tied to a community college with a good technician-training program. John Hammond with the Puget Sound group in Washington state also did something like that. It’s a good model.

We didn’t go the community college route because first, we wanted to do more than train technicians, and, second, we didn’t want to get caught up in an institution that might be more involved in filling chairs to get funded, rather than changing with an industry that is changing rapidly.

We looked at a community college relationship, but thought we’d jump in with both feet and become our own institution.

What we did can be done elsewhere. But truthfully, it is a large commitment and not one you can step away from and hope it functions on its own.

A lot of dealer associations look at our operating. We’re getting our third visit from a group from China. As the auto market expands there, they are looking for the need for training. We’ve been working with them on how to put something together.