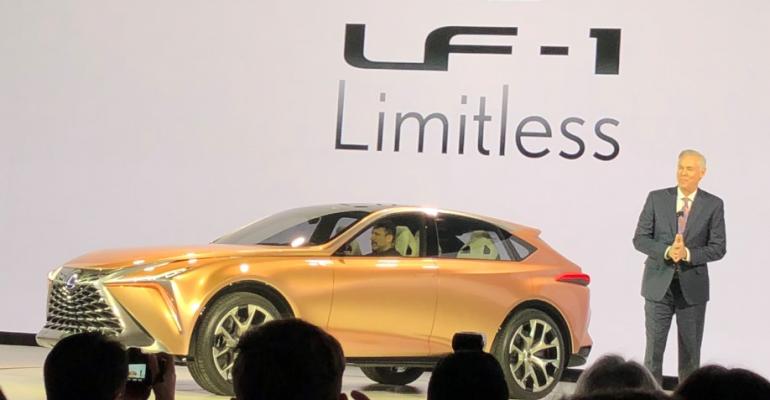 &ldquo;We have to build this vehicle,&rdquo; says an enthusiastic Jeff Bracken, group vice president and general manager of Lexus in the U.S.

“We have to build this vehicle,” Bracken, general manager of the Lexus in the U.S., tells Yoshihiro Sawa, head of Toyota’s luxury brand overall.

Bracken is quick to qualify. “I’m not saying that as an announcement,” he tells the audience as he stands next to the striking concept vehicle at center stage.

His enthusiasm remains unabated as he talks with a few journalists after the vehicle debut. “We couldn’t be happier if we turned this into a production vehicle. It clearly is one of the most gorgeous concepts we’ve revealed.”

Created at Toyota’s Calty Design Research in California, the F-1’s “design visualization fuses the organic shapes of liquid metal with the sharp edges of a traditional Japanese sword,” Lexus says in a press release.

But more than aesthetics fuels Bracken’s enthusiasm. He says on the sidelines the fullsize CUV would fill a missing spot in the lineup.

“We clearly have a gap at the high-end premium cross-utility segment,” he says.

“So we are motivated.  This would be a huge addition for us in the cross-utility segment. When you think of the volume we are missing, there’s a high-end gap for us.”

If the LF-1 makes it into production, the vehicle would weigh in above the midsize RX, currently the Japanese luxury brand’s biggest CUV to date.

Lexus also offers the LX and GX SUVs, but those are truck-based. A production LF-1 would rest on a car platform, likely that of the brand’s LS fullsize sedan.

In a hot CUV market, “we absolutely need this vehicle,” Bracken says of the LF-1.

“Utility vehicles were 65% of the U.S. market for the year and 72% in December, so they are going higher.”

The concept vehicle holds two rows and four seats. No decision has been made whether the automaker would fit a potential production version with three rows.

“We’d strongly evaluate those kinds of matters should we go down that path of production,” Bracken says.

Lexus would sell the vehicle globally, including Europe and China, the world’s biggest vehicle market. The U.S. represents nearly 50% of the brand’s sales.

But Bracken tells WardsAuto: “The RX is the No.1-selling luxury vehicle in the industry. We would never walk away from it.”