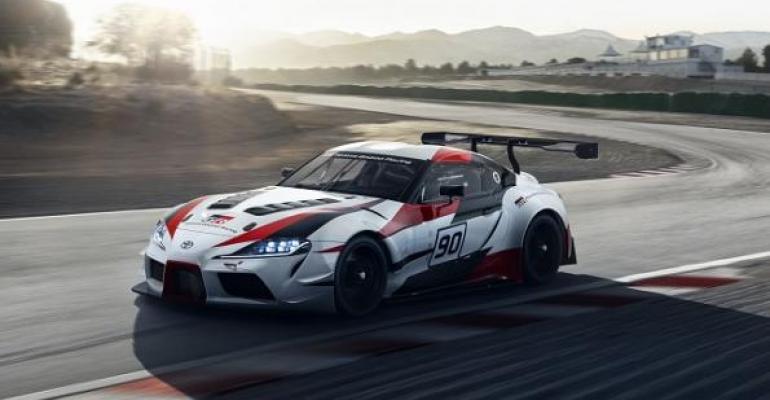 The long-awaited rework of Toyota’s iconic sports car debuts today at the 2018 Geneva auto show, albeit in concept form, not production form as some had expected.

The GR Supra Racing concept “revives the name and the spirit of the most celebrated model in Toyota’s (history and demonstrates) Toyota’s commitment to bringing the Supra back to the market,” the automaker says in a statement released to media ahead of the show.

The Supra concept is a co-development with BMW, which is expected to debut its new, production-ready Z4 sports car in Geneva today.

The Supra’s side windows and windshield are made of plastic, not glass, to further trim weight.

Toyota doesn’t specify an engine in the concept, nor give any indication what type of output a production version of the car would have.

It does note the car has BBS wheels and Michelin tires, both made for racing, as well as Brembo racing calipers and discs and a racing exhaust. The Supra concept’s front and rear suspension are lowered using original equipment, not aftermarket, components, Toyota says.

Calling the cabin “entirely competition focused,” the automaker says the space has an OMP-brand driver’s seat and safety harness, as well as an OMP quick-release steering wheel with paddle shifters.

There is a racing display on the dash and carbon fiber decorates the door panels.

Competition-standard safety elements are on the vehicle, including a full roll cage and fuel and brake lines.

The Supra concept was developed by Toyota’s Gazoo Racing subsidiary. The automaker describes Gazoo Racing as the “international umbrella organization” for its motorsports activities worldwide.

Rumors regarding the return of the Supra began in earnest when Toyota and BMW announced a multi-venture pact in summer 2012 that included jointly developed sports cars.

Since then, the Internet has been abuzz with speculation about a new Supra, which boiled over in January 2014 when Toyota showed a sports car concept, the FT-1, at the 2014 North American International Auto Show in Detroit. That vehicle also debuted without specifications in terms of horsepower and top speed.

Rumors about the car’s return have continued, but many auto shows of the past four years have come and gone without a Supra showing.