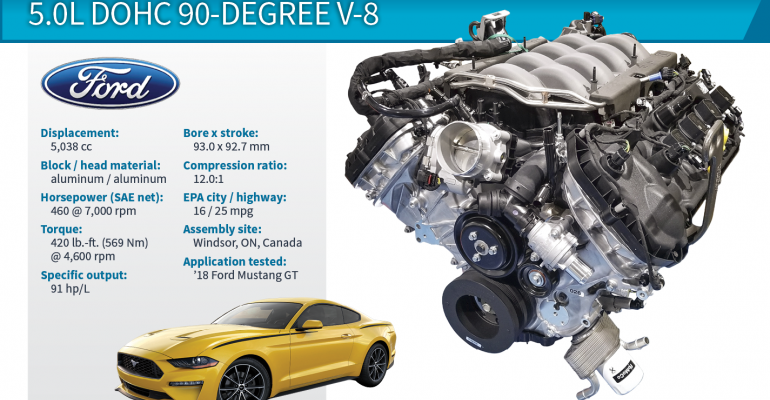 After a one-year hiatus, a V-8 is back on our list and deservedly so in the form of the Mustang GT 5.0.

As much as we loved the deep-throated roar of the ’16 Ford Shelby GT350 Mustang that won a Wards 10 Best Engines award two years ago, we’re happy Ford chose to bring some of that engine’s technology and intangibles to this year’s Mustang GT 5.0L V-8.

The redesigned 5.0L earned a trip to the winner’s circle in 2011, as well as the following year, when the 444-hp variant in the Mustang Boss 302 arrived. But today’s engine is light years ahead when it comes to using technology to push performance and efficiency.

As in the GT350 engine, the GT’s 5.0L incorporates spray-in cylinder liners that not only save weight but allow for a slight increase in displacement. Ford engineers add direct fuel injection to the carryover port system to maintain efficiency while providing a more precise level of fueling needed under wide-open throttle and at high speeds.

At the same time, despite running in efficiency-diminishing Track mode and spending considerable time with our right foot firmly planted, our real-world average fuel economy readings hovered around 24 mpg (9.8 L/100 km) and rarely dipped below 20 mpg (11.8 L/100 km). As much as we’d prefer the standard 6-speed manual, we must give credit to the all-new 10-speed automatic transmission on our test car for the surprising fuel efficiency.

Numbers aside, there’s nothing quite like the visceral feel of a properly tuned V-8 at the limit. “Apparently, there is no replacement for displacement,” observes judge Tom Murphy. “It’s so much fun making this beast howl.”

Our test car came with the optional active-valve performance exhaust allowing muffler adjustments at the touch of a button; it’s doubtful we spent much time exercising the “Quiet” option.

We welcome the return of a V-8 to the Wards 10 Best Engines list after a one-year hiatus, but already we can see the V-6, turbo-4 and electrified-propulsion system writing on the wall.

Says judge and resident poet James Amend: “One final note, or quote, should emissions regulations take engines like this away from us: ‘Never was there a story of more woe, than this of WardsAuto and the five-oh.’”