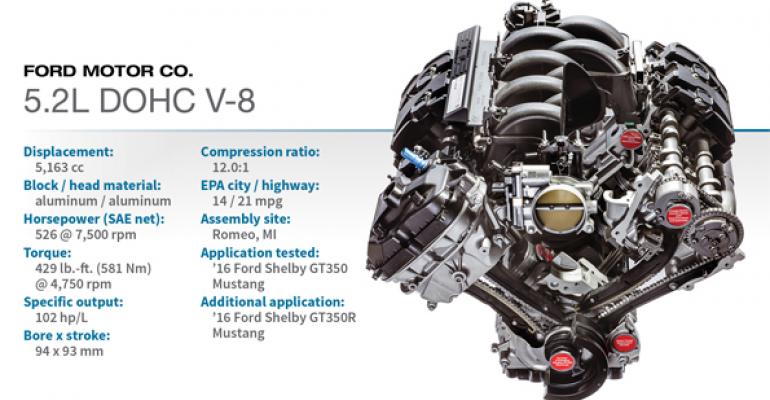 Ford dismantled a perfectly good 5.0L V-8 and put it back together with more displacement, less friction and weight, a volumetric efficiency of 110%, higher compression, 100 more horsepower and the ability to spin at a jaw-dropping 8,250 rpm without forced induction.

Worshipers at the altar of Detroit Muscle have found salvation many times over in Chrysler's Hemi, General Motors’ small block and a number of stout V-8s over the years from Ford.

The latest praiseworthy offering is Ford’s hand-built 5.2L DOHC V-8 in the Shelby GT350 Mustang, which quickly sold out a limited production run of 137 units for the ’15 model year. Several thousand more will rocket out of Ford showrooms in 2016.

Having spent nine glorious days with the GT350 in November, our panel of eight gobsmacked editors deems it worthy of a 2016 Wards 10 Best Engines trophy because it runs like American Pharoah on a trough full of steroids.

Equally important, however, is the process of dismantling a perfectly good 5.0L V-8 and putting it back together with more displacement, less friction, a volumetric efficiency of 110%, higher compression, 100 more horsepower and the ability to spin at a jaw-dropping 8,250 rpm without forced induction or direct fuel injection.

The donor engine, the 90-degree 5.0L “Coyote” that won Wards 10 Best Engines trophies in 2011 and 2012, remains a solid performer, selling in high volume in the Mustang GT.

But after the newly redesigned Mustang launched last year with an independent rear suspension, Ford wanted a truly track-capable version of the pony car that would pay homage to the famous Shelby GT350 of 1965.

Thus began the “Voodoo” engine program, which maintained the 100-mm bore centers of the aluminum block but touched literally every other surface to withstand sustained high engine speeds, allowing racers to hold gears from corner to corner, saving precious seconds on the circuit.

That mission guided the development of every technology incorporated within the engine, from the flat-plane crankshaft to the Plasma Transfer Wire Arc process used to spray in high-strength liners within the cylinders that save 5 lbs. (2.3 kg) and are about as thick as two human hairs.

'Our Ports Flow Better' Than Ferrari's

It’s all about the breathing in this naturally aspirated wonder. Ford engineers say the firing order of the flat-plane crank, combined with the tubular headers, results in pulse separation that helps improve exhaust gas scavenging.

The larger intake and exhaust valves lift an astounding 14 mm and stay open longer to let the engine gulp enormous amounts of air for combustion. Actually, 10% more air than is supposed to fit in the chamber gets crammed in, all without a compressor, thanks to camshaft phasing, acoustic tuning and minimal flow losses.

In designing the high-flow ports, Ford benchmarked the exotic (and much more expensive) Ferrari 458, which has a similar configuration and, like the Voodoo engine, makes more than 100 hp per liter, unusual for a V-8.

“Our ports flow better than theirs,” says Adam Christian, internal-combustion specialist who worked extensively on the program.

I have a gearhead nephew who idolizes Mustangs and has owned two. He toasted the engine in the first driving way too fast on a long stretch of deserted interstate. He jumped at the chance to ride shotgun in the new Shelby GT350 and hear the 5.2L roar to redline.

Each 5.2L V-8 is hand-built at Ford’s engine plant in Romeo, MI, by 2-man teams of senior UAW employees. The low-volume process yields a mere 2½ engines per day.

What makes the 5.2L so special is its ability to produce 526 hp and then deliver it so convincingly to the pavement. We’ve seen big V-8s with forced induction that are impressive, too, but primarily in straight-line acceleration. The 5.2L is a scalpel instead of a broadax.

This remarkable engine truly is a testament to the future of internal combustion.