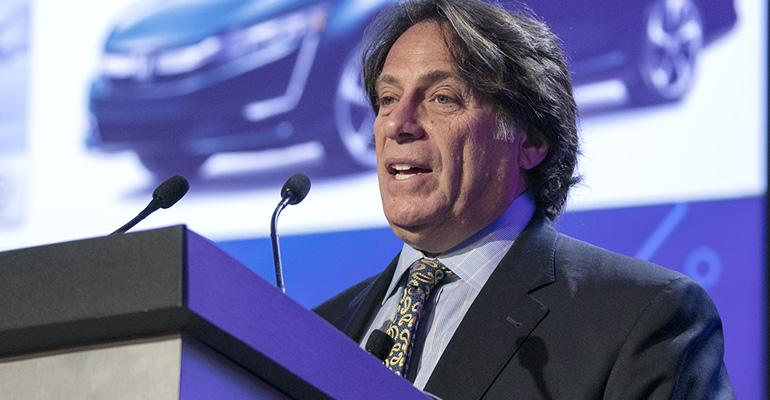 “It’s important for society to be conscientious about this, tolerate the early inconveniences and think long term,” Honda’s Steve Center says of vehicles powered by fuel cells.

TRAVERSE CITY, MI – Be patient, car consumers. It will be worth the wait when vehicles powered by hydrogen-fuel-cell technology become mainstream (whenever that is).

That’s the message from Steve Center, American Honda’s vice president-connected and environmental business development office, as he touts the zero-emissions and general environmental friendliness of vehicles such as the Honda Clarity with a fuel-cell propulsion system, a 2018 Wards 10 Best Engines winner.

“It’s important for society to be conscientious about this, tolerate the early inconveniences and think long term,” he says at the Center for Automotive Research’s Management Briefing Seminars here.

Honda also makes plug-in hybrid and battery-electric versions of the Clarity. It is part of the automaker’s alternative-energy plan for the future. The fuel-cell Clarity is sold in select regions, such as California.

Hydrogen-fuel-cell-powered vehicles often are misunderstood, Center says. “They are electric vehicles that make their own electricity” from a chemical reaction between oxygen and hydrogen. Water vapors are the byproduct of that conversion.

Stoically, Center doesn’t seem particularly concerned that most of today’s consumers shy away from buying EVs.

In a Q&A with him, CAR CEO Carla Bailo notes many first-time buyers of EVs end up getting a vehicle with an internal-combustion engine on their next purchase.

Honda has a loyal customer subsegment that is avid about alternative power systems, and many of them stick with those vehicles, Center says. “In our research, they had said they wanted their next (electrified) car to be bigger and offer more range. That’s what we are providing.”

Honda is working with Shell, known primarily as a traditional oil company, to build a network of hydrogen fueling stations, Center says.

The fuel-cell Clarity requires no user trade-offs, he says. “Charging (EVs) takes a while, but a fuel-cell vehicle refuels in a few minutes. There is no change in consumers’ lifestyles.”

Bailo notes many consumers are scared off by the higher price of EVs, but Center counters that owners ultimately will make that back in fuel savings.

Honda is preparing its dealers for “an electrified future” by enhanced training of salespeople and auto technicians, he says.

The automaker also is working with fire departments and first responders “on what to do and what not to do” if a vehicle propelled by a fuel-cell system is involved in a major accident, Center says.