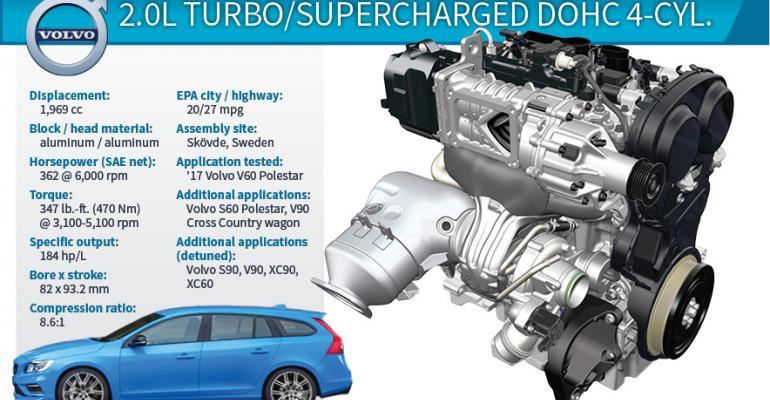 The Volvo powertrain team ratchets up the excitement with another stupendous version of the 2.0L turbo/supercharged I-4 that delivers the highest specific output this competition has ever seen: 184 hp per liter.

The seemingly awkward combination of Chinese ownership and Swedish engineering has yielded some truly spectacular Volvo powertrains in recent years.

Three years ago, this transcontinental automaker dazzled us with a 2.0L turbocharged “T5” 4-cyl. that was uncommonly good in the S60 sedan, and Volvo followed that up a year later with a variant of the 2.0L engine family known as the “T6” that employed both turbocharging and supercharging for more horsepower and torque to ably propel the 7-passenger XC90 CUV.

This year, socket wrenches in hand, the Volvo powertrain team ratchets up the excitement with another stupendous version of the 2.0L turbo/supercharged I-4 that delivers the highest specific output this competition has ever seen: 184 hp per liter.

For those counting, that’s three consecutive Wards 10 Best Engines trophies for an automaker that didn’t enter the winners’ circle until 2011 – 17 years after the competition began.

Anyone questioning whether Chinese ownership would be good for the Volvo brand has been duly silenced.

Volvo has a knack for defying odds and exceeding expectations in the powertrain realm.

When top management boldly proclaimed at the 2012 Chicago auto show that the brand would rely on nothing but 4-cyl. engines, many industry observers found the strategy laughable and assumed the automaker was giving up on its big 3-row CUV, the XC90, which had been using a Yamaha-sourced V-8 until 2011.

At that time, the XC90 lurked at the bottom of its segment. Today, it’s outselling rivals from Mercedes-Benz and Audi, and the excellent 2.0L 4-cyl. offerings (including a hybrid) surely deserve some of the credit.

The automaker took the T6 2.0L 4-cyl. and redesigned the catalyst to reduce backpressure; shortened the connecting rods for higher charge pressures; redesigned the intake camshaft to let in more air; and changed the exhaust cam lobes to allow more fuel into the combustion chamber.

Of course, a larger turbocharger was necessary, with an upsize impeller for more airflow and a maximum (absolute) charge pressure that has been boosted from 9.4 to 42.7 psi (65 kPa to 295 kPA).

On the road, the 2.0L is reasonably sedate until poked, at which point it howls in response.

“What a beast!” exudes editor James Amend on his scoresheet. “It darts off the line like an Olympic sprinter. It’s got tons of torque – early and often.”

Even with the lower compression ratio, this engine demonstrates commendable efficiency, mustering better than 22 mpg (10.7 L/100 km) during 631 miles (1,015 km) of frolicsome driving in November.

The V60 and S60 Polestar twins are the fastest cars Volvo has ever made, capable of reaching 60 mph (97 km/h) in 4.5 seconds and an electronically limited top speed of 155 mph (250 km/h). In Europe, the cars have an even higher specific output, thanks to a 367-hp DIN rating.

The Polestars promise to expand Volvo’s brand attributes from safe and efficient to also include seriously sporty, at least among the young males now lusting for this luscious engine that outguns some V-8s.