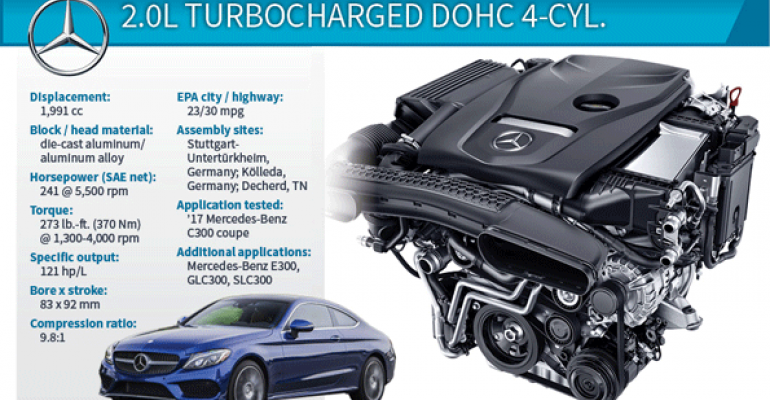 Versatile engine serves entire Mercedes portfolio, in both transverse and north-south applications, with and without all-wheel-drive, ranging from cars to CUVs to commercial vans. &nbsp;

WardsAuto editors concede it was a tough competition among a quartet of premium turbocharged GDI 2.0L 4-cyl. engines before Mercedes-Benz won out for a 2017 Wards 10 Best Engines trophy. It’s not as potent as Alfa Romeo’s Giulia entry, but it is more refined. Though not as fuel-thrifty as the I-4 in BMW’s 330i, it is more efficient than the competition offered in the Audi A4.

Editors chose this “unassuming but capable” Mercedes I-4 turbo as the one that “does it all: smooth and quiet at start-up and idle, rev-happy and ready to run and capable of 27 mpg (8.7 L/100 km) under an occasional heavy foot.”

They characterize it as “punching well above its designated weight” despite lagging the others with only 241 hp compared with BMW’s 248 hp, Audi’s 252 hp and Alfa’s 280-hp engine. They praise it as “the go-to workhorse in a wide array of Mercedes-Benz vehicles, from the high-volume C- and E-Class to the SLC roadster and GLC utility vehicle.”

Designated M274, this engine’s mission is to offer more power and more fuel-efficiency. It has strong family ties to Mercedes’ R4 gasoline engine family, which dates back to late 2011 and now is produced in Europe, China and the U.S. The family’s first member, designed to be transversely mounted in front-wheel-drive Mercedes vehicles, was the 154-hp, 1.6L M270. That was followed a year later by a 208-hp, 2.0L longitudinal M274 for rear-drive C- and E-class cars. Then a reduced-friction M274 provided improved fuel efficiency for a new C-class in 2014, and this more powerful 241-hp version was developed for use in a variety of Mercedes vehicles.

“This engine had to meet all the Toptype specs (such) as power, low-end torque, fuel consumption and emission standards while being modeled closely to the whole engine family. This enables economic production of a top-type M274 in all existing plants worldwide,” says Peter Lückert, director-Passenger-Car Gasoline Engine Development.

Paired with a 9-speed automatic transmission, it offers “a wide spread between sporty, comfortable and economical (modes) selectable by the driver,” he adds. “Therefore, fun-to-drive was also an important development objective.”

Because this engine family is designed to serve throughout the entire Mercedes portfolio, in both transverse and north-south applications, with and without all-wheel-drive, ranging from cars to CUVs to commercial vans, one other major objective was a high degree of commonality. That was achieved by establishing a modular production concept with shared parts and generic elements for the basic engine – particularly the cylinder head, crankcase and drive unit – across all variants.

One important feature added in 2012 to the 1.6L M270 4-cyl. was an efficiency enhancing system called Camtronic. The basic concept is valve stroke switching in conjunction with fast camshaft positioners, which makes it possible to drive a large share of the engine load with optimum fuel consumption with a small cam while almost completely de-throttled, Mercedes says.
This system’s key components are a multi-part camshaft with engagement elements and gearing to adjust two hollow-bored cam parts, each with two double cams for small and large valve strokes, over a central support shaft; a shift gate that actuates the stroke switching; a support-shaft-driven cam for the high-pressure pump; and a dual-pin actuator.

Thanks to a layout with few parts, it was possible for the first time to create a system that enables an operating mode with thermodynamically optimized fuel consumption using early inlet closure by the addition of just one extra actuator. One of the pins is responsible for switching from the large stroke to the small stroke while the other pin is responsible for switching from the small stroke to the large stroke.

Lückert says the engineering team’s most difficult challenge meeting the M274’s objectives was “to design a Toptype engine with additional performance requirements (that remained) close to the whole existing family.” Its modified induction and turbocharging systems enable higher top-end power and stronger low-end torque, and these higher levels of output required modifications to the pistons, piston pins and especially the oil- and water-cooling systems, Lückert says.

Among this engine’s significant technologies are the piezo fuel injectors introduced in the original 2011 M270 engines and the cooling channel pistons that debuted in the 241-hp M274 version, he says.

From their central position at the top of each combustion chamber, the piezo injectors can spray fuel up to five times per combustion cycle at up to 2,900 psi (200 bar) to create air-fuel mixture tumble for faster combustion speeds. And the rapid multi-spark ignition can fire as many as four sparks per millisecond for a more complete burn.

As in many modern engines, variable cam timing optimizes both intake and exhaust sides, and the M274’s slight overlap between them enables the cool incoming mixture to help scavenge hot exhaust gases into the exhaust manifold and from there to the turbocharger.

“That increased flow helps the turbocharger respond more quickly at low engine speeds, as evidenced by the lack of turbo lag during our test drives,” WardsAuto Editor Tom Murphy says.

The engine still can be found in the U.S. on cars such as the E300 sedan, hooked to a 9-speed transmission, but its successor was named last year: the M264.

“The new-generation M264 will feature higher low-end torque and maximum power above 200kW (268 hp) while further reducing fuel consumption,” Lückert says. “A 48V starter-alternator system will bring fuel-saving features such as “coasting with engine off and a nearly unnoticeable engine stop/start system,” he adds.

Other features will include a twin-scroll turbocharger and an electric 48V water pump.

A Mercedes spokesman says the new engine will debut in the E-Class Coupe and Cabriolet in Europe, but it will appear in the U.S. in another yet-to-be announced model before the end of the decade.