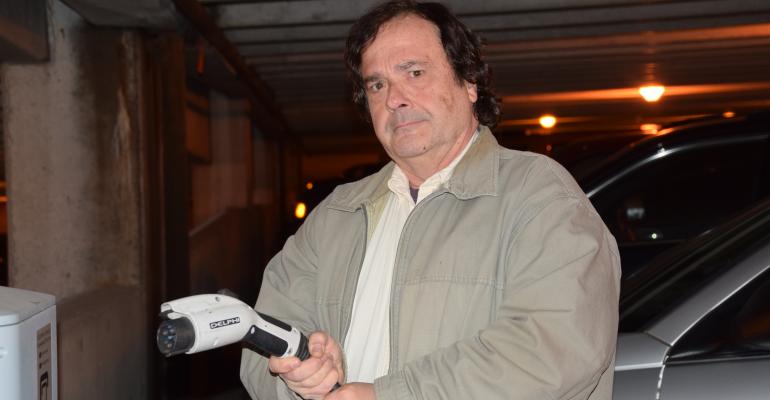 10BE Judge Passes on Judging BMW i3

With 55 miles of range available and facing a 45-mile round-trip commute, not being able to recharge the i3 at home would be cutting things too close for comfort.

Because the 2015 Ward’s 10 Best Engines awards are based on evaluations by eight WardsAuto staffers, the results may be skewed if any of the eight don’t have the opportunity to drive a given nominee.

In the case of one of this year’s winners, the ’14 BMW i3 electric vehicle, my input was missing. Blame Mother Nature and the range limitations of most EVs.

I was slotted to take the i3 home on Monday, Nov. 24. A windstorm that eventually caused 2,000 powerlines to fail and cut off electricity to 180,000 Detroit-area households was brewing when my wife called and informed me: ‟The fire department’s putting out a fire in the transformer at the end of the street. We don’t have any power.”

Having become a power-outage statistic, I started performing calculations which may be familiar to EV drivers.

The i3 typically has 81 miles (130 km) of range on a full charge. A co-worker who’d driven the EV earlier in the afternoon told me it had 55 miles (88 km) of range remaining when he plugged it in to the charger at Ward’s offices.

My round-trip commute covers 45 miles (72 km), so not being able to recharge the i3 at home would be cutting things close, range-wise. I could forgo battery-draining amenities such as the radio and cabin heat, but not necessities such as exterior lights. My neighbors didn’t have any more electricity than I did, so I couldn’t recharge the i3 next door or down the street.

Driving the i3 anywhere except work was out of the question. (We took my wife’s Chevrolet Equinox to a functioning restaurant, although it might have been oddly romantic to stay home and eat cheese sandwiches by candlelight.)

I could have hung around until the i3’s juice was topped off at the office. Instead I told Ward’s Auto World Executive Editor Tom Murphy, our press-car wrangler, that I wasn’t comfortable driving the i3 with less than a full charge. Turns out we were flush with 10 Best Engines contenders at the time, and a gasoline-powered Hyundai Sonata was available.

The i3 with an optional range-extending gasoline engine also is being honored by WardsAuto. That model could have gotten me home and back without the range anxiety, but we had tested and returned it before the windstorm hit.

My takeaway? I trust my colleagues’ endorsement of the i3, but if I were buying one, I’d invest in a gas-powered generator as a hedge against power outages. Or maybe move closer to work.