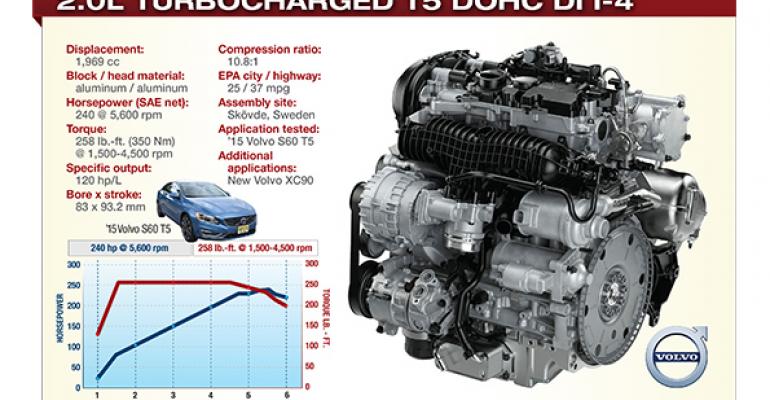 The engine family was designed from the outset to be teamed with electrification in hybrid-electric vehicles. &nbsp;

The Ward’s 10 Best Engines competition has recognized outstanding powertrain achievement for 21 years. In this installment of the 2015 Behind the 10 Best Engines series, WardsAuto looks at the development of Volvo’s all-new 4-cyl. family.

Volvo, a Chinese-owned but still very Swedish automaker, is in the process of transitioning virtually everything it builds to high-efficiency Volvo Engine Architecture (VEA) “Drive-E” engine power.

This all-new, all-aluminum, all-turbocharged engine family eventually will include 2.0L gas and diesel I-4s and an 1.5L I-3, all sharing the same 0.5L cylinder size and numerous common components.

Because the automaker is replacing Volvo’s venerable turbocharged I-5s and I-6s, the front-wheel-drive models they power will continue to be labeled T5s and T6s, based on output, not cylinder count. Keeping the nomenclature makes some marketing sense but likely will confuse potential buyers, especially when otherwise very similar all-wheel-drive models still are powered by the old I-5 Turbo.

A team of engineers began working on an all-new engine family way back in 2007, when the company still was owned by Ford and using derivations of Ford engines. Instead of continuing to invest time and money adapting Ford engines to its vehicles, Volvo executives determined it would be better to develop their own.

They built a solid case explaining how that would benefit both companies, but by the time it was ready for presentation to then-Ford CEO Alan Mulally, Ford was negotiating to sell Volvo to China’s Geely Automobile. Mulally agreed but suggested they present their strategy to Geely. And after they did, the VEA program became a key element of the 2010 sale and was soon a fully approved and funded project. Among its major objectives were exciting drivability along with best-in-class fuel economy and manufacturing flexibility.

The engine family also was designed from the outset to be teamed with electrification in hybrid-electric vehicles. The first Drive-E hybrid, a ’16 XC90 T8 “Twin-Engine” plug-in hybrid marries the twin-charged 2.0L 4-cyl. to electric power for 400-plus-horsepower V-8-like performance with surprising EV-only range and PHEV efficiency.

“The premium market is flooded with good 4-cyl. turbocharged engines,” one wrote, “but Volvo’s new T5 2.0L in the S60 sets a high bar for all.” Other comments from thoroughly impressed WardsAuto judges included: “Packs a good punch. Loads of torque, early and often,” and, “Smooth all the way through the gears.”

We asked Michael Fleiss, Volvo Car Group’s Powertrain vice president, about Drive-E engine design priorities. “Volvo wasn’t in a very good situation five or six years ago,” he says. “The company had been sold by Ford, so we had to develop a new powertrain family. But we took this as an opportunity to design everything new, and also to look into our manufacturing side and redo everything there.”

The team asked itself what it would take to create a new world-class engine family, and decided on downsizing with excellent breathing and reduced friction. Then they designed everything with those key elements in mind. They unashamedly looked toward their competition for state-of-the-art technology, then added “Volvo spice” to it.

“Out of that came a very good engine that was completely designed in-house,” Fleiss says, “which guarantees tailor-made technologies that are best fits for Volvo instead of ‘off the shelf’ solutions from engineering partners.”

Beyond the common industrywide challenge of finding the best balance among performance, fuel efficiency, refinement and cost, he says, the most difficult development challenge was presented by the twin-charged T6 engine, especially combining the supercharger with the turbocharger for satisfying performance. “Then the T5 was more or less a product of the development of the T6 engine.”

But the first major hurdle the team had to leap was creating a very durable downsized base engine from which the more-powerful variants would be derived, “especially the cylinder head,” Fleiss says.

“We made several prototype tools for it until we had the necessary strength, durability and cooling support for the [top-level engines’] performance.” And the toughest challenge from a business standpoint was doubling the size of Volvo’s powertrain team, from 500 to over 1,000 engineers, while in the process of developing this completely new powertrain family.

Fleiss adds that cost was not a major issue with the T5 version. “It’s a 2.0L with the latest technology and a single turbo, which puts it in a very good cost range.” And he asserts that Volvo’s small size becomes a benefit when changes are made. For example, the main bearings were slightly downsized to further reduce friction and the catalyst was replaced by one with lower back-pressure for 2016, both easy and inexpensive updates compared with what those changes might have cost a much larger automaker with multiple engine plants.

What differentiates Volvo’s Drive-E T5 I-4 from all the other turbocharged, direct-injected 2.0L fours on the market? “Having a common engine family for both gasoline and diesel makes us very competitive,” Fleiss says, adding that its compact size and its balance between part cost and investment are advantages.

“We have to be cautious with investments but are able to spend relatively more [on components] due to our small size. This creates a feature content for our powertrains that our competition can’t match.”

What improvements might we see in performance, efficiency, emissions or refinement from next-generation Drive-E engines?

“The next big challenges are lower emissions and CO2 levels,” Fleiss says. “We will further increase fuel-injection pressures and work with cylinder deactivation. Over the next five years we will make the same amount of investment as we did in the first generation, and with that level of investment, we will create some surprises.”