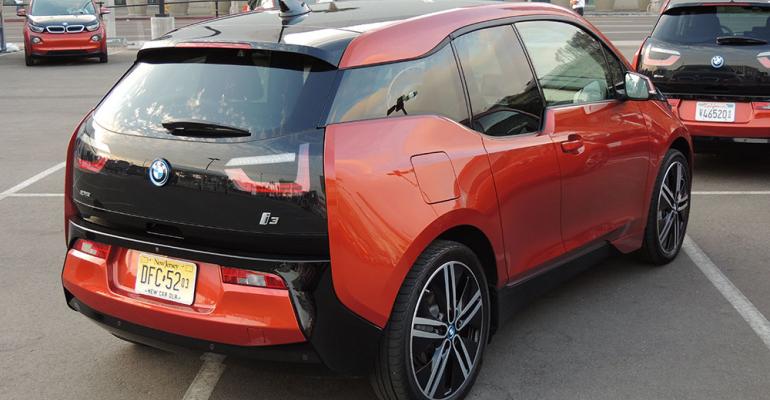 The i3 electric vehicle feels like a BMW, but the appearance &ndash; inside and out &ndash; will take some getting used to. BMW is banking that its customers agree that form follows function.

If you found that experience exhilarating, you’ll love the new BMW i3. Off the line, it’s faster than any vehicle in the Bavarian stable, including many that are twice the price.

Of course, drag-racing an M3 only makes sense for about the first 2 seconds, because the M3 will pull ahead by 40 mph (64 km/h) and then leave the i3 in its wake. Drive the i3 hard like a go-cart, and range anxiety eventually will temper the tomfoolery.

But it’s good to know an EV can deliver street cred, at least one with the BMW roundel. Today’s electric vehicles, such as the Nissan Leaf, Fiat 500e, Chevy Spark EV and Ford Focus Electric, are fuel-economy plays for customers who want zero emissions and freedom from the gas pump.

The 170-hp BMW i3 is the first affordable EV to come along that begs to be driven hard. The rear-mounted electric motor, tight turning circle, low center of gravity, 50-50 weight distribution and darty disposition give the i3 a considerable edge over those that have come before.

Curb weight is the great differentiator. Weighing in at less than 2,700 lbs. (1,224 kg), the i3 is significantly lighter than the four other EVs – even the smaller and less practical 500e.

The i3 also makes more horsepower than the others. The Leaf and Spark actually generate more torque, but it’s hard to tell because both are heavier, especially the Leaf.

Positioning the i3 as a sporty alternative makes perfect sense for a brand that caters to well-heeled buyers who can afford both an M3 and an i3, perhaps even an entire fleet of cars.

Have a lunch meeting a short way from the office? Take the i3, enjoy the ride and feel great about saving the planet. Going on a weekend ski trip? Take the all-wheel-drive X5 and don’t worry about the fuel consumed.

Perhaps the most shocking element of BMW’s new third-generation EV is its price: Starting at $41,350, before backing out any federal or state incentives, the i3 goes head-to-head with EVs from mainstream brands.

Is it possible Chevrolet, Ford, Nissan and Fiat intenders could cross-shop a BMW for the first time? We’re about to find out.

BMW arrived unexpectedly at this crossroads by committing to sustainable mobility as part of the automaker’s Megacity program to study transportation needs in the world’s most populated urban centers.

The i3 achieves its goals by deploying the industry’s first mass-produced carbon-fiber reinforced plastic occupant cell mounted on an aluminum chassis, then wrapping the exterior with dent-resistant thermoplastic panels.

So if the Bavarians didn’t skimp on the carbon fiber, the propulsion system, the LED headlamps or the 19-in. forged aluminum wheels, then where was cost taken out of the vehicle?

Look inside. Here, you will find a BMW like no other.

This interior tries really hard to recast every bit of space from the windshield to the backlight, like a science project intent on pushing boundaries.

The i3 interior is as offbeat as exposed concrete and could be perceived as cheap.

But BMW is counting on potential buyers to embrace the fact that the battleship-gray instrument panel is pressed from recycled hemp; that the military-grade canvas on the door panels actually is repurposed water bottles; that the natural-looking wood trim on the dashboard comes from abundant eucalyptus forests; and that the optional leather on the seats is tanned with olive-leaf extract.

The application of so many reusable materials is noble, to be sure (25% of i3’s interior plastics are recycled). But so much is going on aesthetically within the car’s five doors that most of the cabin looks disjointed and feels strangely unfinished.

The instrument panel ebbs and flows in completely unexpected directions; the gear shifter is big and awkward and would be right at home on a space shuttle; the door trim looks like it doesn’t even have a grab-handle.

Few things are familiar inside the i3, including the seats, steering wheel and, ironically, the iDrive controller. The interior seems to embody the term, “disruptive technologies,” all focused on eliminating mass.

Perhaps this is the completely new approach the EV sector needs because its growth has been painfully slow.

Besides, BMW customers buy into the form-follows-function mantra. Appearance is less important than performance, so it may not matter that the thermoplastic belt line dips into a deep ravine above the two rear-hinged back doors, or that the three side windows are wildly different from each other, or that the i3 is a little bit tall sedan and a little bit short CUV.

Make peace with the aesthetics, and there are lots of reasons to like the i3, and not just because it’s an absolute hoot to drive.

The cargo hold is ample; the space for two rear occupants is generous; the lack of a center console yields a flat floor between driver and passenger and creates wonderful airiness; the car incorporates both standard and quick-charging ports; the connectivity and display screens are first-rate.

As unfamiliar as the car is on the face, it feels spiritually like a BMW, able to negotiate hairpins and accelerate hard out of corners, while sounding eerily quiet.

The accelerator pedal was masterfully calibrated to feel conventional, as if it’s wired to a gasoline engine. The brake pedal touch is spot-on as well, being only slightly more grabby than the calipers of a 3-Series, tuned to capture braking energy to recharge the 22 kWh lithium-ion battery.

BMW learned a lot from the experimental first-generation Mini E, which had only one pedal: Press to go, lift off to stop. It worked well enough that the automaker, when working on the i3 program, factored in a lot of automatic regenerative braking when the driver takes a foot completely off the accelerator.

Lift off slightly while on the highway, and the i3 will coast for a good distance without consuming any electricity. If an idiot cuts you off on the highway, you’ll be grateful for that second pedal: It will be necessary for a panic stop.

If all-electric driving finds no haven in your anxious psyche, the i3 comes available with a 2-cyl. gasoline range-extending generator that adds $3,850 to the starting price, doubles the range and adds a few hundred pounds.

Three trim levels are available: Mega, Giga and Tera, which is the top-level trim WardsAuto evaluated. An engineer says those well-equipped test vehicles would sticker below $50,000.

BMW is pushing aggressively with the i3, making it available in 285 of the 338 U.S. showrooms when the car goes on sale in May.

Top management insists the i3 will be profitable. That’s assuming the market is ready for a BMW of a completely different stripe, one that forsakes internal combustion.