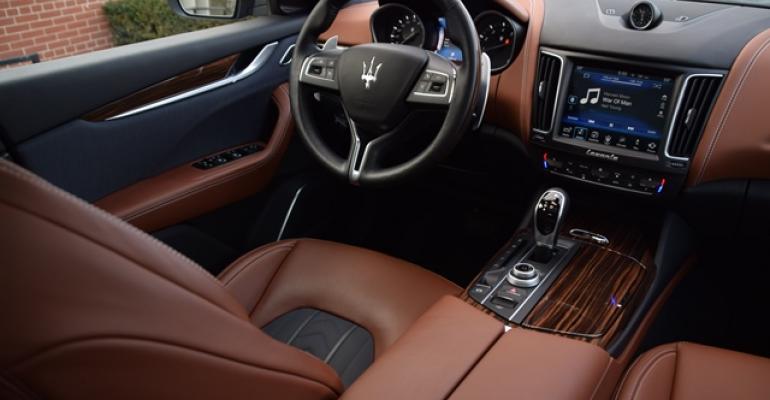 It looks and feels like a Maserati. Yet, it emits the character of an SUV.

The expressive folks at Maserati can get carried away talking about the wonder of the brand and its rich heritage.

Metaphors on the meaning of Maserati flew every which way last year at the New York auto show debut of the Levante, the 113-year-old Italian automaker’s first foray into SUV territory.

But the florid talk aside, Maserati, best known for fast cars, pulls it off in creating a stunning interior for the Levante (which looks pretty darn good on the outside, too).

Interior designers hit the luxury brand’s high points with rich materials and impeccable craftsmanship. But they also nailed it in delivering an interior that is distinctively SUV. It’s posh but functional, bold yet warm, ready to roll but easy to kick back in.

Using Maserati DNA to fashion a cabin with SUV traits is an automotive marvel worthy of a Wards 10 Best Interiors win for 2017.

The latter are on the seats, door panels, roof lining and sunshades. Ermenegildo Zegna, a leading fashion designer, partnered with Maserati on that extravagant touch that mixes and matches top-grade leather with natural-fiber Zegna Mulberry Silk embellished with a hand-stitched chevron pattern. Smooth as silk, you might say.

With their wrap-around shape, the front seats nearly envelop occupants of this high-end utility vehicle with a base price of $72,000, although available options can kick up the transaction price. The model we drove, that included the Zegna silk edition, stickered at $90,000

The Levante is built in Italy but shares an infotainment system with other vehicles from parent company Fiat Chrysler Automobiles. The Maserati uses UConnect and an 8.4-in. (21-cm) touchscreen also appearing in Chryslers, Jeeps, Dodges and Rams that cost less than $90,000. But Maserati isn’t slumming it with its adapted version of UConnect; it’s one of the best systems around.

The Maserati trident logo – based on a feature that’s part of a fountain statue of Neptune in Bologna, Italy – shows up throughout the Levante.

It’s stitched into the active head restraints. The trident looks particularly striking in the middle of the steering wheel. It lets you know, front and center, you’re in something special.

Five brothers started the namesake auto company. They were into racing. Maserati’s fast-track reputation carries on. But with the Levante now in the lineup, the brand stands to make a name for itself in the SUV world as well.