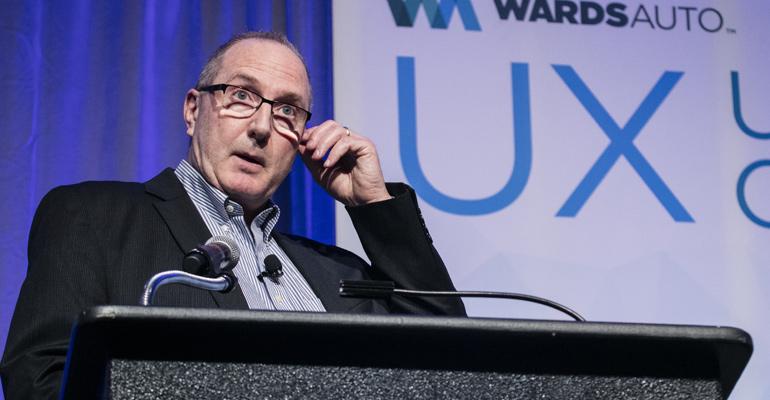 A new ecosystem is developing around user experience, according to Ford’s Chris Atkinson, who says engineers and designers are making decisions now about technology that will appear on cars in five years.

NOVI, MI – Even before the auto industry’s transition into autonomous and battery-electric vehicles is complete, the user experience likely will have become a key differentiator between vehicles of all kinds, experts at the WardsAuto User Experience Conference here say.

The user experience has become steadily more important to consumers, says Chris Atkinson, UX Global Project Manager for electric, autonomous, trucks and luxury vehicles for Ford. “It’s no wonder why we’re talking about UX and why it’s important,” he says.

In the 1970s, fuel shortages created an appetite for fuel-efficient cars. In the 1980s, quality became a major issue. SUVs blossomed in the 1990s and around 2010 Silicon Valley’s influence on automakers’ portfolios began to be felt, Atkinson says.

A new ecosystem is developing around user experience, adds Atkinson, who says engineers and designers are making decisions now about technology that will appear on cars in five years.

“We all know where we’re going with AVs and BEVs. We’re going to have smart vehicles,” he says, adding that those cars will have new architectures to accompany their technology. For example, he says, “BEV cockpits don’t need to worry about an engine.”

Cars of the future could even sense when the driver is hungry. They could measure breathing with a smart algorithm, and it can be merged with personalized information and demand-based services, he says. “The car knows what you want and can point you towards it.”

Mike Maddelein, vice president-engineering at Inteva Products, says the technology to produce a new generation of interiors is evolving, including cabins for autonomous vehicles that even allow passengers to sleep or work while being chauffeured.

Future developments could include use of virtual reality, personal-assistance technology and biometric monitors, Maddelein says.

But normal transport is going to turn into a social environment using something as relatively simple as swivel seats, he adds.