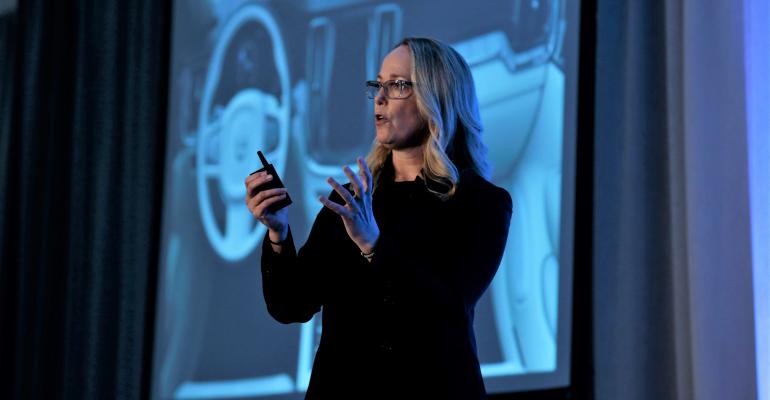 Tisha Johnson, vice president-interior design for Volvo Group, says at the Wards Auto Interiors Conference the company’s designs are rooted in Scandinavian traditions such as desire for light, forms that fit the human shape and respect for nature.

NOVI, MI – Volvo’s prize-winning interiors depend on a cohesive design philosophy built around the company’s Scandinavian heritage, respect for innovation and early engagement with suppliers, according to the Swedish automaker’s top interior designer.

Tisha Johnson, vice president-interior design for Volvo Group, says here during a presentation at the WardsAuto Interiors Conference the company’s designs are rooted in Scandinavian traditions such as desire for light, forms that fit the human shape and preservation of nature.

They also encompass a premium feel and Scandinavian preferences for authoritative architecture, outdoors activity and creativity manifesting in the details of Volvo’s concept and production vehicles such as the crystal shift lever, large screens and lighter tones, Johnson says. “Nature is all around you,” she says. “In Sweden, we say there is no such thing as bad weather – just bad clothing.”

The Scandinavian influence includes a desire for natural light. Consequently, Volvo vehicles are built with panoramic sunroofs that flood the interior with light. “If you look at a Scandinavian house, they have large windows,” she notes.

The Scandinavian philosophy prepares vehicles such as the 360 Concept for different autonomous-vehicle scenarios such as the morning commute, business or nightlife.

Meanwhile, production vehicles such as the Volvo XC90 benefit from an interior built around concepts of space and activity.

The matrix for interior design in a Volvo vehicle includes attention to architecture, technology, materials and the brightwork that dresses up the cabin.

Executing the designs requires close collaboration with various departments within the design studios, such as color and trim and user interface. “We’re in and out of each other’s offices all the time,” Johnson says, citing the example of a “ton” of discussion around the use of the bold orange carpet used in one Volvo’s recent XC40.

Efforts to shape an interior design that is “cohesive and seamless” extend to suppliers, who are brought into the process very early to collaborate on specific projects. Suppliers are held to exacting standards to make sure the pieces they furnish conform to the design intent.

Volvo also strives to simplify its designs by reducing the number of components used inside the vehicle. The introduction of large screens eliminated the need for 80 different buttons and knobs, Johnson notes.

Volvo Group, owned by Chinese holding company Xhejiang Geely, has design studios in Sweden, the U.S. and China. Its design department operates with a multicultural staff that bring different perspectives and insights to various projects.

The studio in China has offered perspectives on furnishing rear seats, while the studio in California has provided design and consumer insights that “give us an American perspective with a special positioning to Silicon Valley and the tech industry,” Johnson tells Wards following her presentation.