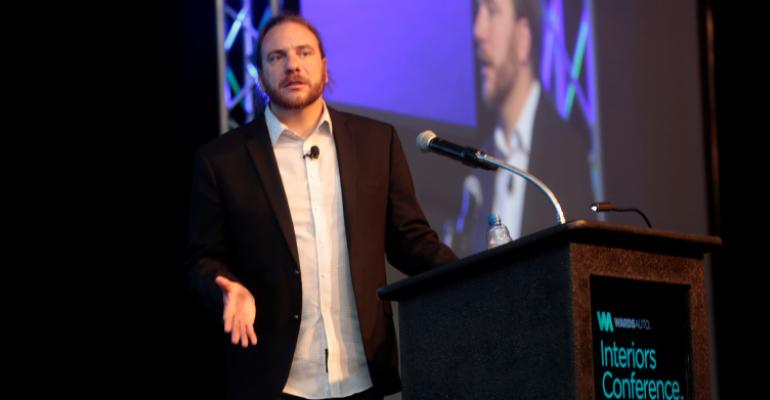 “We wanted to make sure we had something that was constantly evolving and completely intelligent,” says Andrew Hill, Director-UX, Data & Artificial Intelligence, Mercedes-Benz Research & Development North America.

NOVI, MI – If personal transportation is to remain relevant among a new breed of technology- savvy consumers, automakers must offer products capable of keeping up with the digital experience outside the car, namely the smartphone and smart home devices.

For Mercedes-Benz, the answer is MBUX, an intelligent and intuitive multimedia system to recently launch in the all-new A-Class compact luxury sedan line. The Mercedes-Benz A220 is a 2019 Wards 10 Best Interiors winner, due in part to the technology-rich MBUX.

“We wanted to make sure we had something that was constantly evolving and completely intelligent,” says Andrew Hill, who leads the UX, Data & AI Group at Mercedes-Benz Research and Development North America in Sunnyvale, CA.

“We had to make sure we had really great connectivity behind the system, so we’d be able to maintain updatability and keep up with the latest off-board services,” Hill says during a keynote address at the WardsAuto Interiors Conference here.

MBUX also required a deep commitment to artificial intelligence for the predictive features of the system and for a top-notch voice system, which also uses AI for natural language processing and conversational speech recognition.

“We see the voice systems as one of the main ways people will work with their vehicle moving forward, and so we wanted to make sure we supported a true natural language system,” says Hill, who joined MBRDNA in 2007 on its Connected Infotainment and Consumer Electronics team after graduating from the University of California-Santa Cruz.

Ask Mercedes is the name for the voice-recognition system. Users need not memorize keywords or exact phrases to activate a feature, they simply ask the Mercedes virtual assistant to perform the function, much the same as the Amazon Echo smart device uses Alexa.

If you’re cold inside the A220, for example, just say “Hey, Mercedes, I’m cold,” or “Mercedes make it cooler,” and MBUX will adjust the cabin temperature.

MBUX leverages an NVIDIA processor for its eye-popping graphics, which arguably are the richest and most detailed the industry has seen. It also emulates the graphic and image quality of a smartphone or tablet. An emphasis also was placed on ease-of-use, Hill says.

From a controls perspective, Hill’s group surprisingly chose not to update the central controller but to stick with a current-generation center console-mounted touchpad.

“It is simply a very relaxed way to operate the unit,” he says. “It is what people are used to and it’s very comfortable. But we also bring, for the first time, a touchscreen.” 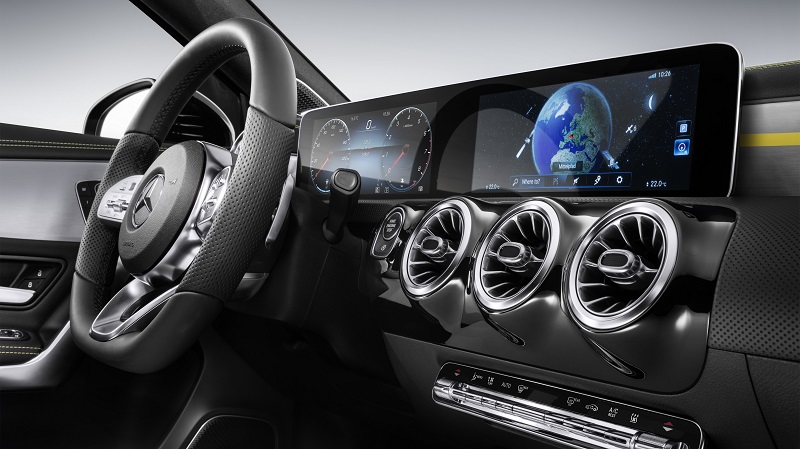 The touchscreen uses high-quality glass and capacitive sensors and boasts resolution up to 1920 x 720 pixels (200 dpi). The screen senses an approaching finger with the accuracy to anticipate which button the user seeks, and subtle UX cues, such as slight highlights to the button, cement the connection instead of using traditional haptic feedback.

Thumb-roller controls on the steering wheel encourage hands-on-the-wheel, eyes-on-the-road use of the MBUX system. One controls the head unit, the other the instrument cluster. A full-color head-up display supports eyes-on-the-road.

The MBUX content display is adjustable, with a classic Mercedes-Benz appearance, a sportier look with aggressive colors, and an understated look where only essential information is lit and the remainder dimmed out for a relaxing experience.

Personalized settings help reduce feature-creep in the digital environment. MBUX simplifies setup by placing a vehicle on the touchscreen. Users touch the portion of the car they would like to customize.

But the system’s AI also aids in decision-making by offering suggestion menus. For example, using the driver’s history, it can make suggestions for navigation destinations, while so-called “smart spellers” anticipate what the driver may want and curates lists based on time and location to reduce cognitive load.

“We’d like your car to set itself up for you,” Hill says. “At the end of the day, your goal is not to learn how to use the car, you just want to drive somewhere. So, we made a car that learns who you are.”

Hill admits this could lead to privacy concerns. Everyone has a different level of comfort when it comes to privacy, so MBUX includes the capability to turn off features they may find too nosy.

“At Mercedes-Benz, we take privacy very seriously,” says Hill, whose previous projects at the automaker included the MyCommand and F125! concept cars and the AMG Performance Media and Mercedes Digital DriveStyle products.

Looking ahead, Mercedes-Benz wants to install more intelligence into MBUX so it determines true voice commands from casual passenger conversations more accurately, as well as additional data sources to give users more available information. And while the A-Class with MBUX unabashedly targets a younger demographic than Mercedes-Benz has in the past, it does not suggest the automaker considers older buyers Luddites.

“They very much want to take advantage of these systems,” Hill says, noting the AI within MBUX reduces what an owner needs to know and flattens the learning curve. “And all of our systems can be shut off and still provide a satisfying user experience.” 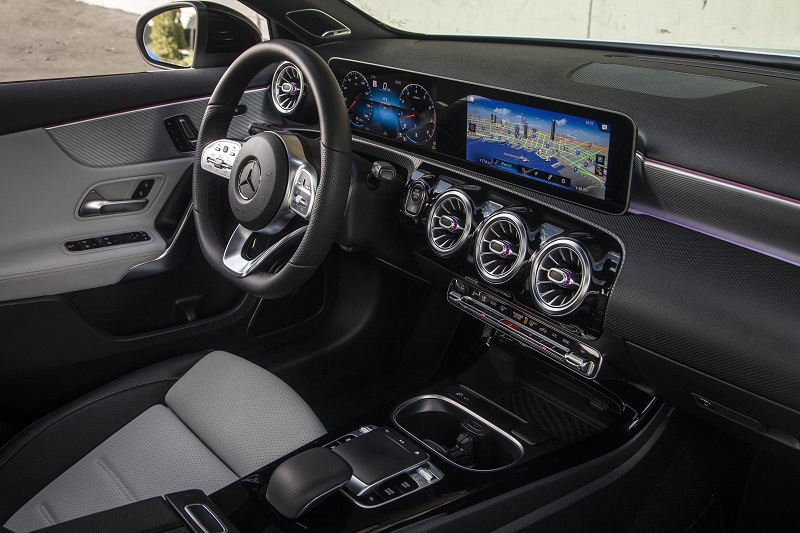