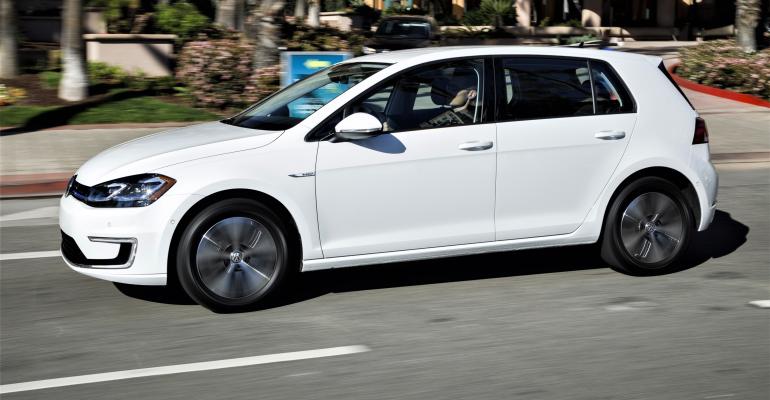 The ninth-generation hatchback will coexist alongside the ID.3, which replaced a battery-electric version of the seventh-generation Golf in 2020.

Volkswagen CEO Thomas Schäfer confirms the Golf will return to electric power when the next-generation model is launched toward the end of the decade, quashing rumors the long-running hatchback could be axed in favor of the automaker’s similarly conceived ID.3.

Speaking at the 2022 Los Angeles auto show, Schäfer says he sees a future electric version of the Golf coexisting with the ID.3, despite the two models being close on size, market positioning and pricing. “The ID.3 has never been a successor to the Golf. It is more of a Golf Plus,” he tells Wards.

When asked if he thinks there is room for both models in the VW model lineup, Schäfer (pictured, below left) says, “Yes.”

The CEO confirms VW is currently weighing options for its existing combustion-engine models, many of which have existed for decades and carry highly identifiable names, as the company sets its sights on going fully electric in selected markets, including Europe, by 2033.

“We have iconic names like Golf and GTI. It would be crazy to let them die. We will stick with the ID. logic, but iconic models will carry a name,” Schäfer says of VW’s plans.

The reference to the GTI name, used on performance versions of the Golf since 1976, suggests it could be applied to powered-up electric versions of future Golf models in place of the GTX name VW has used on the ID.4 and ID.5 models.

Schäfer cites the example of the ID. Buzz, which already carries a name rather than a numeral, saying, “We might have an ID. Golf, let’s see.”

Emphasizing VW’s commitment to retaining iconic model names, Schäfer says, “We would not let go of the Golf name, no way.”

Volkswagen kicked off production of an electric version of the seventh-generation Golf in 2014. However, it was discontinued in 2020 when the ID.3 was launched in Europe.

Although not confirmed, a future electric version of the ninth-generation Golf would likely be positioned between the ID.2 and ID.2X CUV and the ID.3 and upcoming ID.3X – a facelifted high-riding, possibly all-wheel-drive version of today’s model due out in 2025.