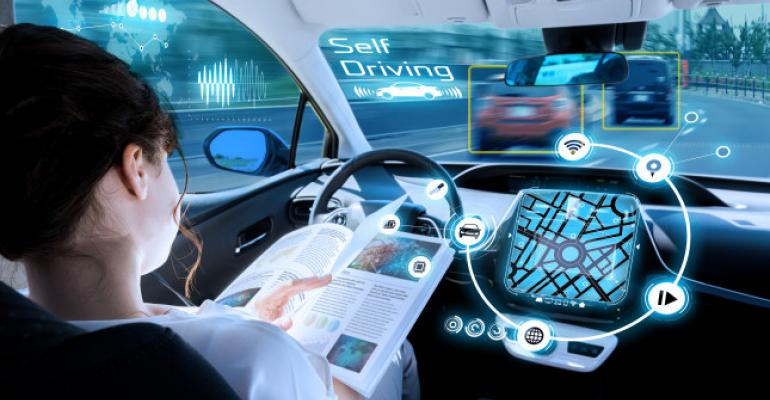 Shutterstock
Consumers have heard more about AVs than they understand, survey indicates.
Vehicles

The survey results show AV makers will need to overcome several hurdles to win over the general public. More than 20% of U.S., U.K. and German consumers are concerned AVs won’t know how to avoid unexpected obstacles in the road.

Almost half of consumers in the U.S., U.K. and Germany believe it will be more than three years before fully functioning autonomous vehicles are available, a survey shows.

The survey by Klas, a provider of edge intelligence solutions, also shows nearly 20% of respondents would be willing to pay an additional $10,000 to obtain AV technology.

Consumers across all three markets are interested in the convenience autonomous vehicles will deliver, with over 25% of respondents saying they’re excited about the potential for self-driving vehicles to run their errands and deliver groceries to their home. Another 22% say they think the adoption of AVs will increase human productivity and be more environmentally friendly.

Klas also found that almost 30% of U.K. and German respondents are looking forward to not having to park their own cars again with AV drop-off and pick-up, while Americans are hoping to see fewer accidents on the road with the adoption of self-driving vehicles.

The survey results, however, show AV makers will need to overcome several hurdles to win over the general public. More than 20% of consumers across all three markets are concerned AVs won’t know how to avoid unexpected obstacles in the road, and about 20% are worried about the vehicle’s system malfunctioning in traffic. Germans are particularly worried about software security, with 22% expressing concerns about AVs getting hacked.

Additionally, 20% of all respondents said they believe fully self-driving cars are already available for the general public to operate or travel in, with that number increasing to 31% among Americans only.

“This shows there is a clear gap between knowledge of autonomous vehicles and an understanding of the technology’s current capabilities, which is another area in which vehicle makers need to educate the public,” Klas says in a news release.

Industry stakeholders including Ford, Tesla, BMW and Volkswagen are all racing toward fully autonomous vehicles through partnerships with companies such as Dell, Intel Klas, and Nvidia, while vendors like Bosch, Continental, and Mobileye are working on introducing self-driving additions for consumers to purchase.

“Despite the innovation and high-profile work of these key players, the survey results indicate consumers are largely unaware of who they are, with only about 20% of consumers across all geographies saying they know brands such as Mobileye, Aptiv or Nvidia,” Klas says.

“The Klas-commissioned AV consumer sentiment survey shows there is a misalignment with consumer expectations and AV development timelines,” Klas CEO John Gallagher says. “While the respondents are eager to experience autonomous driving, consumers have major concerns about the technology.

“Nearly a quarter of respondents indicated concerns that vehicles wouldn’t know how to avoid unexpected obstacles in the road,” Gallagher continues. “The result is that AV developers need to continuously evolve and assess autonomous drive systems with real-world scenarios, with results being made transparent to the public. Transparency not only demonstrates the AV developer’s commitment to safety but aligns to the evidence-based regulations coming down the road.”