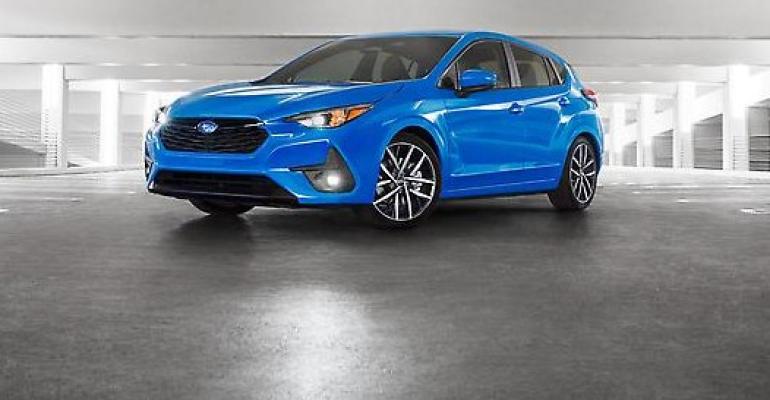 That well-attended (and, like the September Detroit show, heavily EV-focused) media day kicked off with announcements of 2023 North American Car, Truck and Utility Vehicle of the Year Finalists and concluded with the global launch of new Blink Charging home, fleet and multifamily EV charging stations.

In between was a full day of press conferences that included several production and concept vehicle debuts led by the global debut of Subaru’s sixth-generation ’24 compact Impreza. Available only as a 5-door hatchback (no more sedan), this all-new Impreza boasts a 10% stiffer chassis, standard EyeSight driver-assistance systems and available 11.6-in. (29.5-cm) Starlink central information display with wireless Apple CarPlay and Android Auto connectivity.

The first Impreza debuted 30 years ago at the 1992 Los Angeles auto show. It was the only vehicle in its segment at the time offering AWD and it later became the basis for the performance rally-championship-winning WRX.

This ’24 Impreza will come in Base, Sport and the new RS trim, all with Symmetrical All-Wheel Drive upgraded with standard Active Torque Vectoring for faster response and more agile handling.

When they arrive in U.S. dealerships next spring, the Base and Sport trims will be powered by a 152-hp 2.0L direct-injection flat 4-cyl., while RS models will get an upgrade to a 182-hp 2.5L boxer four. Both deliver their torque through Subaru’s Lineartronic CVT with a  paddle-shifted 8-speed manual mode on Sport and RS trims.

The ’24 Impreza will also benefit from a version of the WRX’s dual-pinion electronic power steering rack for more direct feel and greater responsiveness, and Sport and RS trims will feature an SI-Drive performance management system, 18-in. alloy wheels and a sport-tuned suspension.

Inside the quieter and more comfortable cabin, the interior will offer ample head and legroom and storage space and a prominent center information display with highly visual controls. The standard dual-zone climate system has been updated to focus only on occupied seats, and a more supportive front seat will increase comfort and minimize fatigue. 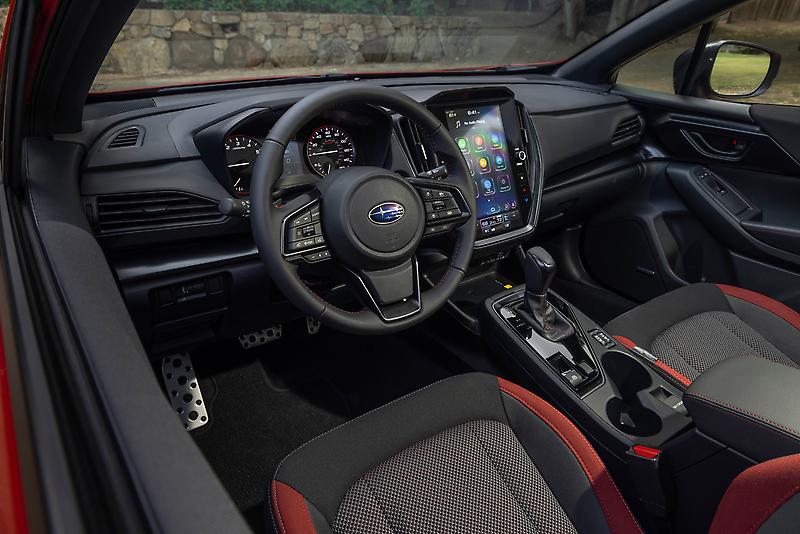 The enhanced standard EyeSight Driver Assist system will operate more quickly under a greater range of conditions, Subaru says, thanks to a wider field of view, updated control software and the addition of an electric brake booster. It will identify bicycles and pedestrians sooner and alert the driver and apply braking, when necessary, to avoid collisions.

On models with Blind-Spot Detection, Lane Keep Assist and Rear Cross-Traffic Alert, Automatic Emergency Steering will help avoid collisions, and a standard Rear Seat Reminder can help prevent child and/or pet entrapment by alerting the driver to check the rear seat before exiting.

The available Subaru Starlink system provides a plethora of safety and security features and driver assistance and information tools.

The enthusiast-focused RS – which debuted in 1998 and was the U.S. precursor to the WRX – will offer unique exterior trim, dark gray 18-in. wheels, blacked-out grille, side spoilers and side mirrors and upgraded LED head- and fog lamps.

Other notable debuts at the L.A. show: