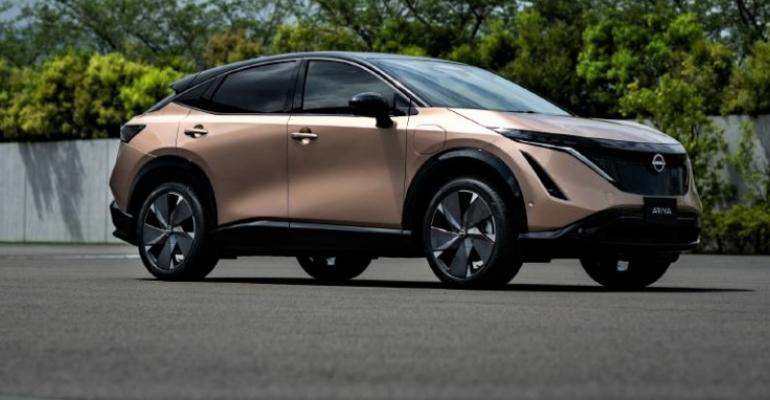 Nissan’s Ariya Picks Up Where Leaf Leaves Off

Nissan says the C-segment exterior hides a D-segment interior. That’s because the Ariya is built up from the Renault-Nissan-Mitsubishi Alliance’s new CMF-EV platform designed specifically for fully electric vehicles.

Nissan blazed a path to our electric transportation future with the all-electric Leaf hatchback back in 2010. A decade later, the company has learned a lot about what people want from their EVs and has put those lessons into practice with the upcoming Ariya CUV.

Some of those changes will be obvious when the Ariya goes on sale in the U.S. in second-half 2021, and some will make more sense if you are already familiar with the EV landscape. The CUV will go on sale first in Japan starting in mid-2021.

The most obvious change sits right in the middle of the Ariya’s grille, which Nissan now calls a “shield,” as we’ll explain below. While revealing the production-intent Ariya, the automaker announces a new corporate logo that will be illuminated by 20 LEDs on Nissan’s all-electric models. The Ariya is the first to carry it.

Moving the tiniest bit aft from the new logo we find the shield. As Teslas have proved to a mainstream audience, EVs do not need traditional cooling mechanisms from old-fashioned grilles.

And so, while the original Leaf had a front fascia that blended in with the car’s swoopy shape, the Ariya’s front end looks at first glance like a standard grille but it is in fact smooth and hides a 3D traditional Japanese kumiko pattern for looks as well as sensors for safety and convenience (left). 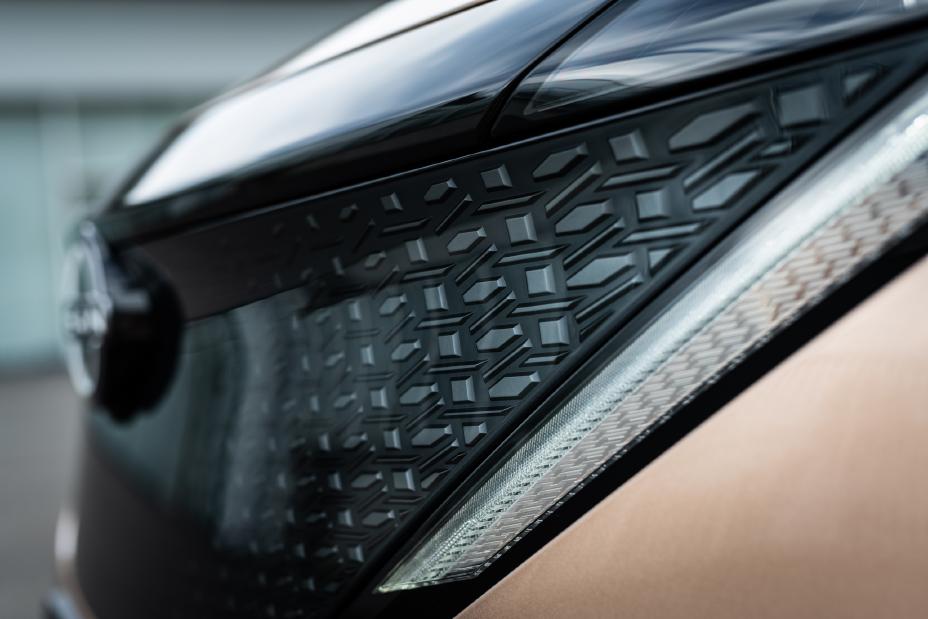 The rest of the Ariya’s exterior is relatively standard for a 2021 CUV, adding just a bit of a forward-looking electric design to the mix. The Ariya will ride on 19- or 20-in. wheels and will be available in six two-tone exterior paint combinations that have a black roof or three full-body colors.

But Nissan says – without providing specs just yet – the C-segment exterior hides a D-segment interior. That’s because the Ariya is built up from the Renault-Nissan-Mitsubishi Alliance’s new CMF-EV platform.

As the name implies, this platform was designed specifically for fully electric vehicles, and using it here allowed Ariya engineers and designers to push the front of the interior forward because there was no need to house a transmission.

They also could make the second row roomier because the HVAC tubing runs through the flat, skateboard-like floor instead of a center console.

Android Auto, Apple CarPlay and Amazon Alexa will be part of the Ariya’s infotainment system, which will be displayed on a 12.3-in. (31-cm) center screen set on the same horizontal line as another 12.3-in. screen in front of the driver (below in Japanese spec). The technology package includes an improved voice-recognition system designed to understand natural language and over-the-air firmware updates.

The new CMF-EV platform will provide either front- or all-wheel-drive powertrain options for the Ariya, and it can hold two different battery packs. Nissan for now says the most powerful powertrain option – the dual-motor e-4ORCE AWD version – will produce up to 392 hp and 443 lb.-ft. (601 Nm) of torque. 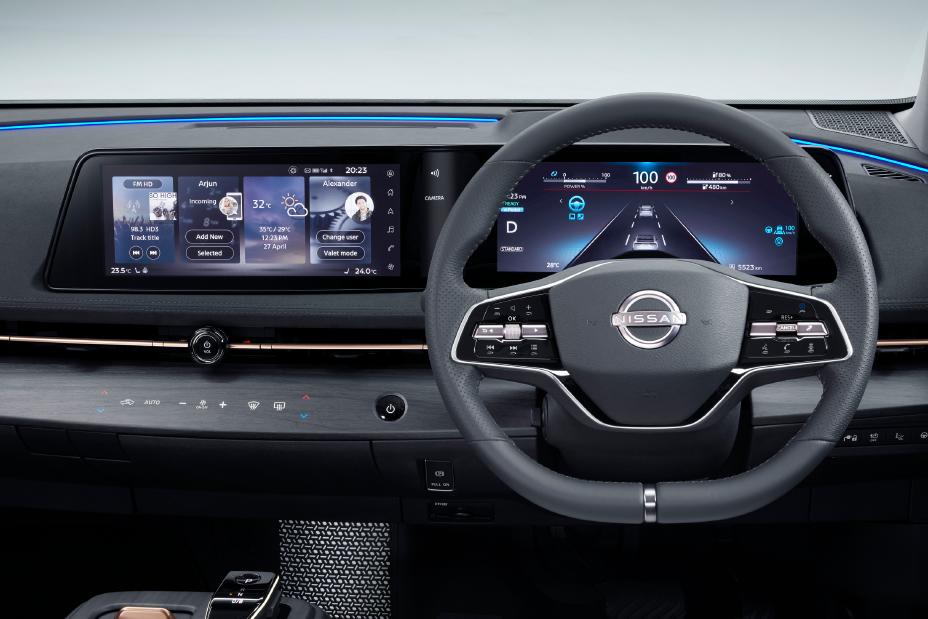 The battery comes in two sizes, with either a 65-kWh or a 90-kWh capacity. The Aryia uses almost all of that energy (63 and 87 kWh, respectively) when fully charged, and the pack has an active, liquid-cooled battery management system. It can charge at up to 7.2 kW on a Level 2 charger.

Exactly how far the Ariya can go on a full charge depends on which of the four powertrains are installed. According to Nissan’s preliminary estimates, the longest-distance model (with the larger, long-range pack and single-motor FWD) will be able to go about 300 miles (483 km).

Acceleration specs have not yet been announced for the full lineup, but Nissan says the AWD models will be able to go from 0-62 mph (100 km/h) in 5.4 seconds with the lighter, smaller battery and 5.1 seconds with the long-range pack.

This brings us to one of the big changes heralded by the Ariya that only EV fans will understand. When it comes to DC fast charging, there are two major standards (not counting Tesla's proprietary SuperCharger connectors): CHAdeMO and CCS Combo.

While the Ariya will continue to use CHAdeMO in Japan, where the format is popular, in the U.S. the new electric CUV will come with the CCS standard.

Because the Leaf was one of the few popular EVs to use CHAdeMO here, we can expect that format to fade even more than it already was before this announcement. The Ariya will be able to charge at up to 130 kW at a CCS fast-charge station.