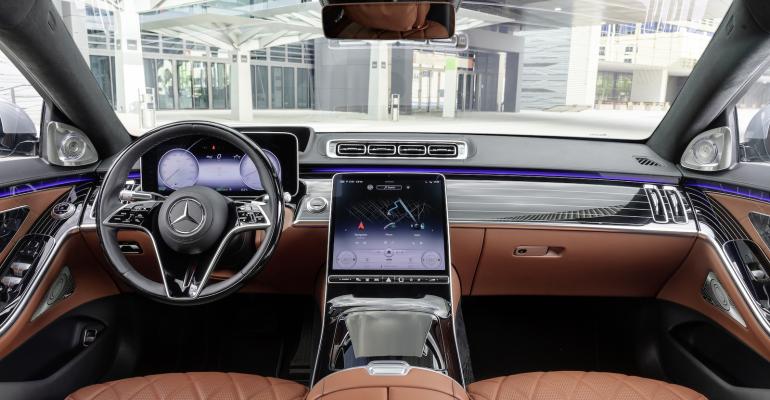 Mercedes Takes ’21 S-Class to Next Level of Autonomous Driving

Engineered to provide Level 3 and Level 4 self-driving capability, the new S-Class is ready to take control when regional infrastructure, regulation and legislation allow it.

With no more than a glance at the 2021 Mercedes-Benz S-Class sedan’s interior, it’s clear this redesigned flagship luxury car is packed with state-of-the-art technology.

That assessment also applies to what isn’t obvious on the surface: the advanced driving assistance systems (ADAS).

Grouped together in the standard Driver Assistance Package, the list of ADAS is a lengthy and – if you know modern Mercedes products – familiar one. With the ’21 S-Class, however, the automaker’s existing collection of ADAS is broadly improved in terms of sensitivity, refinement, functionality and operational speeds and conditions.

The big news, however, is the introduction of Drive Pilot (below, left) and Intelligent Parking Pilot technologies, new Level 3 and Level 4 self-driving systems that pave the road to the automaker’s autonomous future.

Initially, Drive Pilot will be available only in Germany and not until the second half of 2021, when regulatory approval is completed.

It is a Level 3 conditionally automated self-driving technology capable of monitoring the surrounding environment and performing all tasks without driver input until it actively requests that the driver take over.

When Drive Pilot requires human intervention, such as when conditions prevent it from operating properly or when upcoming roads are unsuitable for autonomous driving, it notifies the driver to retake control of the car and expects a human response within 10 seconds.

To ensure drivers remain ready to resume control, Mercedes uses an infrared camera that monitors the driver’s face and eyelids to detect sleeping, observes the driver’s position in the seat, and otherwise identifies and responds to any circumstance that might prevent a driver from retaking control of the vehicle.

If the driver does not resume manual operation of the vehicle, Drive Pilot assumes he or she is suffering a medical emergency and activates the Automatic Emergency Stop Assist system.

This technology, part of the standard Driver Assistance Package in all global markets, brings the S-Class to a stop, activates the hazard flashers and initiates an emergency call to summon help. 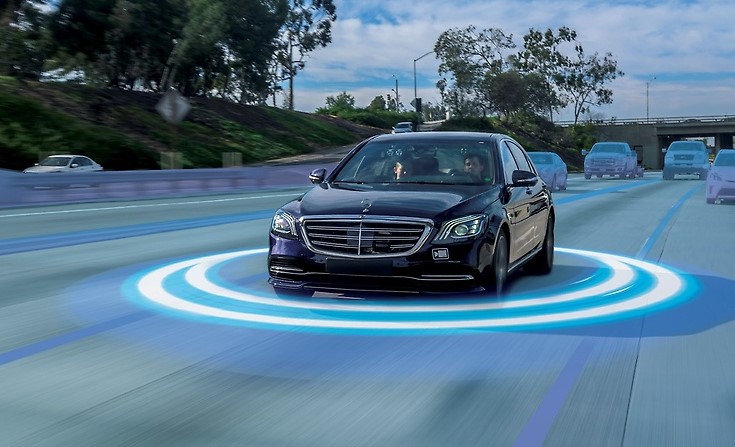 Michael Hafner, director of driver assistance systems and active safety for Mercedes-Benz, emphasizes that Drive Pilot is not the same as General Motors’ Super Cruise or Tesla’s Autopilot.

In the new ’21 S-Class, Drive Pilot handles those tasks. However, it only works at speeds up to 37 mph (60 km/h), the current legal autonomous driving speed in Germany. When that cap is raised, an over-the-air software update will allow Drive Pilot to work at higher velocities, says Hafner.

Mercedes is not the first European automaker to roll out concrete plans to offer a Level 3 driving system in a production car. Audi is expected to provide its customers with Traffic Jam Pilot in the current-generation A8, but delays in regulatory approval and concerns about legal liability in collisions have shelved the technology indefinitely.

At first, Mercedes will limit Drive Pilot’s operational scope, according to Hafner. The plan is to initially allow use of the system on 90% of Germany’s limited-access highways.

This approach minimizes risk and maximizes real-world learning opportunities. Expansion of use-case scenarios and functionality, as well as availability of Drive Pilot to customers in the rest of Europe, China and the U.S., hinges on required changes to regional infrastructure, regulation and legislation that will allow it.

The same is true for the S-Class’ new Intelligent Parking Pilot technology, a Level 4 high-automation self-driving valet system designed for use in parking garages equipped with the necessary infrastructure.

Using its Car-to-X technology to communicate with a properly outfitted garage, the S-Class can autonomously park itself and then return to its owner when summoned. Unlike with existing examples of this technology, there is no requirement for the driver to be standing near or within sight of the car as it makes its way to and from its parking space.

Customers who want either of these technologies will pay for an optional preparation package that installs the necessary lidar, digital HD map technology, a more precise positioning system than a typical GPS, a rear window camera and external microphones for detecting the sirens of emergency vehicles.

Vehicles with Drive Pilot also get redundant steering, braking and electrical systems for an extra measure of safety.

After the purchase of the preparation package, when Drive Pilot is legal to use and S-Class owners are ready to activate it, Mercedes may require an additional cost or subscription to the feature, but Hafner says the automaker has made no final decisions about that.